Wonderwall.com is counting down the 20 hottest superheroes of both the big and small screens. In honor of the premiere of "Avengers: Endgame," we're taking a look back at our fave heroic hunks — from Captain America to Iron Man and everyone in between!

No. 20: Dolph Lundgren as The Punisher

No offense to Thomas Jane, Ray Stevenson or Jon Bernthal, but if you really want to highlight the hottest iteration of the anti-hero The Punisher, you have to go all the way back to Dolph Lundgren's 1989 version of Frank Castle. Hello!

No. 19: Jeremy Renner as Hawkeye

No. 18: Taylor Kitsch as Gambit

Sweet Christmas, could the "Jessica Jones" star's shirt get any tighter? One can only hope!

The fastest man alive also happens to be one of the hottest! Swoon.

The 2012 dud "The Amazing Spider-Man" and its 2014 sequel failed to impress web-slinger fans. Still, we have to admit that Andrew Garfield's version of Peter Parker had our Spidey senses tingling.

This one is tough for us because we really love Mark Ruffalo and Eric Bana, but Edward Norton's dark and brooding iteration of Bruce Banner is by far our fave! Remember when he got all oiled up and meditated shirtless? Yep, we're pretty sure we'd still like him even when he's angry.

No. 13: Anthony Mackie as Falcon

No. 12: James Marsden as Cyclops

The fact that James Marsden spent his entire run in the "X-Men" franchise with a visor covering his steel blue eyes is practically a crime against humanity. Thank goodness there's nothing covering those cheekbones. Hot damn!

If you're into dark eyes, dark hair, loose morals and perfectly manicured facial hair, Robert Downey Jr.'s Tony Stark is the man for you.

Ant-Man may be small, but he packs a big punch when played by Paul Rudd — especially when it comes to his sex appeal!

No. 9: Ben Affleck as Batman

"Batman v Superman: Dawn of Justice" was arguably the worst superhero flick since 2011's "Green Lantern," but thanks to a few absolutely wonderful scenes of a shirtless Ben Affleck as Bruce Wayne training for his epic showdown with the Man of Steel, we can never completely swear off this film fiasco.

No. 8: Will Smith as Hancock

Will Smith, the erstwhile Fresh Prince, raised temperatures as the titular hero of the 2008 action-comedy "Hancock."

No. 7: Stephen Amell as Green Arrow

It is a damn shame that Oliver Queen keeps his gorgeous face hidden behind a mask while defending Star City.

No. 6: Ryan Reynolds as Deadpool

How sexy is Ryan Reynolds' Wade Wilson? So sexy that even with his face covered, he's still one of the hottest heroes (we're using that word liberally now!) to grace the big screen. Just, you know, keep the mask in place, please.

No. 5: Hugh Jackman as Wolverine

No. 4: Michael B. Jordan as The Human Torch

We love Michael B. Jordan so much that we're willing to ignore the utter train wreck that was the 2015 "Fantastic Four" reboot.

No. 3: Chris Evans as Captain America

No. 2: Henry Cavill as Superman

There have been many iterations of the Man of Steel over the years, but none finer than chiseled British import Henry Cavill.

No. 1: Chris Hemsworth as Thor

Those arms! Those eyes! That long blond hair! Must we go on? Chris Hemsworth as Thor is our No. 1! 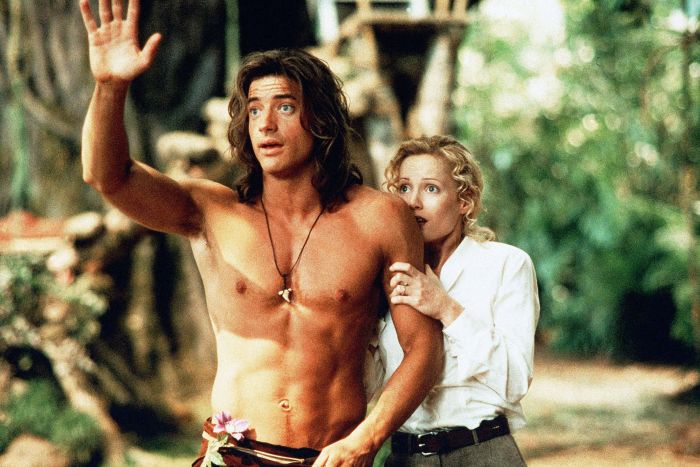