In November 2019, we learned that model and cookbook author Chrissy Teigen's parents, Ron Teigen and Vilailuck "Pepper" Teigen, were headed for divorce. The split comes years after Pepper moved in with Chrissy, husband John Legend and their two children. While their living arrangement might be unique, it turns out many adult celebrities have enjoyed living with their parents or, in Chrissy's case, having a parent live with them. Wonderwall.com is taking a look at other celebs who've lived with one or both of their parents well into their adult years. Keep reading for more…

RELATED: Long-term celeb couples who decided not to marry

Not only is Oscar-nominated actor Bradley Cooper a talented hunk — he's also a true mama's boy. Following the 2011 death of his father, Charles Cooper, Bradley opened his Los Angeles home to his widowed mother, Gloria Campano. "I love having her," he told Esquire at the time. "I wouldn't have it any other way."

RELATED: Stars who attended the 2019 Oscars with family members

The Kardashian-Jenner clan has a history of moving in with matriarch Kris Jenner. In 2015, Kim Kardashian West, Kanye West and daughter North lived with Kris while renovating their Hidden Hills, California, home. It wasn't the first time Kim and Kanye lived with Kris, either. Back in 2013, while renovating their home in Los Angeles's Bel Air neighborhood, the family settled in with the momager for more than a year. While the Wests and Kris have maintained their own residences over the last few years, they practically still live together, thanks to Kris purchasing a multimillion-dollar home in Hidden Hills right across the street from Kim.

Although it was just for a couple months, Prince Harry and Duchess Meghan enjoyed an extra pair of hands following the birth of their son, Archie, in May 2019 thanks to Meghan's mom, Doria Ragland, moving into Frogmore Cottage with them. Doria flew to Britain in April prior to Archie's birth and stayed through Meghan's postpartum recovery. Once she returned to Los Angeles at the end of May, the couple hired a nanny to help them keep Archie healthy and happy.

Following "Saturday Night Live" star Pete Davidson's high-profile splits from pop star Ariana Grande and, later, actress Kate Beckinsale, he did what any broken-hearted guy would do: He moved in with his mom. Actually, Pete didn't just move in with Amy Waters Davidson in 2019 — they actually bought a house together. Pete shared in April on "The Tonight Show with Jimmy Fallon" that their arrangement still offers privacy because he lives in a basement apartment while his mom lives above.

At the height of "Creed" star Michael B. Jordan's fame in 2016, he used his newfound financial security to make sure his parents, Donna Jordan (left) and Michael A. Jordan (not pictured) were set for life. He purchased his family a mansion in California's prestigious Sherman Oaks and called it a "dream come true" to give his parents a home. What made their situation so unique was that Michael decided to move into the house with them. As of late 2018, Michael was reportedly still a tenant (although likely a rent-free one) at his folks' property, though claimed he was ready to find a bachelor pad of his own.

The secret to tennis star Rafael Nadal's massive success is the continuous love and support of his family, who've lived with him since at least 2012. That was the year Rafael shelled out a reported $4.4 million to buy a sprawling family compound in his native Spain where his parents, Ana María Parera and Sebastián Nadal Homar, sister and other family members have reportedly lived together. It's unclear if the arrangement has continued since Rafael's 2019 wedding to longtime love Xisca Perello.

For the eight years the Obamas were in the White House, they had an extra guest living with them: Michelle Obama's mom, Marian Shields Robinson. The first lady's mother joined the family at 1600 Pennsylvania Ave. in Washington, D.C., in 2009 and remained there until early 2017. The reason for their shared living quarters was pretty sweet: so grandma Marian could help the first family raise their daughters, Sasha Obama and Malia Obama, during President Barack Obama's two-term presidency.

Fans of comedienne Kathy Griffin's former reality series, "My Life on the D List," might remember that following the death of her father, John Patrick Griffin, in 2007, Kathy moved her equally hilarious mother, Maggie, into her Los Angeles home. Maggie was a fixture on Kathy's show until 2010 and later appeared on her daughter's series "Kathy" from 2012 to 2013. Although it's unclear if and when the two moved into separate residences, it appears that as of 2019 — following the news of 99-year-old Maggie's dementia diagnosis — she's living in a 24-hour care facility.

Model, actress and "The Bachelorette Australia" star Sophie Monk decided in 2017 to move her parents, Andrew and Sandi, into her mansion on Australia's Gold Coast. The set-up proved beneficial for Sophie, who shared in an interview with The Daily Telegraph that her mom made her bed each day and she got to enjoy family dinners each night.

Fans of "The Real Housewives of Atlanta" know just how close singer-songwriter Kandi Burruss is with her sharp-tongued mama, Joyce Jones. For years, the duo lived together with Kandi's daughter, Riley Burruss, but things changed when Kandi married TV producer Todd Tucker in 2014. After the couple built their dream home, Kandi built a connecting house — not a loft or guest quarters, but an entire home — for her mother. And while Joyce is literally just steps away, on the show, she's usually found hanging out in Kandi and Todd's kitchen, doling out her opinion on just about everything.

Thanks to TV personality Maria Menounos's traditional Greek upbringing, she lived at home with her parents all the way until she got married in 2017 — at 39. In 2014, Maria talked to Ellen DeGeneres about her unique living situation, explaining that her longtime partner (and future husband) Keven Undergaro also lived in her family's home. After saying "I do" on live television, Maria and Kevin moved to their own place, but in 2019, the families are as close as ever, in part because of Maria's mother's 2016 brain cancer diagnosis. Maria — who often posts Instagram pics with her parents — shared in April 2019 that mom Litsa and dad Costa were headed back to Connecticut after spending several months at her house, where she took on the role of caretaker for her mother. In her post, Maria said, "I know Instagram isn't the place to show anything that's not happy and positive… But for anyone out there who's a caretaker, you know how hard it is to take care of people. It was a lot on me, too. … I've been so exhausted, but I'm also so sad when they leave."

Long after Dev Patel delivered a brilliant performance in 2008's "Slumdog Millionaire," he continued to live in the same West London home he grew up in — with his siblings and parents too! It wasn't until 2017 — the same year Dev was nominated for an Oscar for his performance in the biopic "Lion" — that the then-27-year-old actor ventured away from home, purchasing and renovating a Los Angeles estate for himself. Although Dev may not live in London anymore, he still considers his parents' house his true home and stays there when he's in town.

After the devastating February 2014 suicide of actress Julia Roberts' half-sister, Nancy Motes, the actress promptly moved their mother, Betty Lou Bredemus, out of her West Los Angeles home and into Julia and husband Danny Moder's Malibu estate. At the time, Betty was battling lung cancer — a disease that would ultimately end her life in February 2015. Before Betty's death, Julia shared that even while sick, her mom helped out around the house by doing her family's laundry.

NFL quarterback Kirk Cousins found a way to live rent-free during the summers by rooming in his parents' basement in their hometown of Holland, Michigan. Kirk, who married Julie Hampton in 2014, wasn't just leeching off his parents, however. In 2018, he and his wife moved into a brand-new five-bedroom home that they had built on Lake Michigan.

Oscar-winning actress Jennifer Lawrence and her parents moved to Hollywood in 2006 when she was 16. But the "Hunger Games" star wound up staying at her parents' Santa Monica townhome well into her career, not leaving until 2004 (when she was 24) to live on her own in the prestigious Beverly Crest neighborhood of Los Angeles.

Actress and singer Selena Gomez lived at home with her mom, Mandy Teefey, and stepfather Brian Teefey, both of whom were also her managers, until she was 21. "I think it's time," she told Ryan Seacrest for an E! special at the time. "I just love being with my family and I love knowing that they're there. But yeah, I think it's probably time for me to get my own house." A year later in 2014, she initiated an even bigger split, firing Mandy and Brian as her managers, though they're close today.

"The Hills" stars Spencer Pratt and Heidi Montag were living the high life with designer clothes, a nice home, meals out at restaurants and more, until financial mismanagement caused them to go broke in 2010. With empty wallets, the couple relocated to Spencer's parents' Carpinteria, California, beach home where they lived rent-free for a time so they could rebuild their bank account. These days, they're back on their own and better than ever after welcoming son Gunner in 2017.

Oscar-nominated actress-turned-singer Hailee Steinfeld grew up in the spotlight under her parents' roof. While it's not unusual for a child star to live at home with mom and dad, Hailee kept their arrangement going into her adult years, not moving out until she was 21 in 2017. In an interview the following year, Hailee said her move to New York City was harder than she expected. "Part of me was a little depressed, but the other part of me was like, this is awesome," she told Who What Wear.

NBA point guard Jeff Teague (right) might make upwards of $8 million per season, but he isn't too bougie to stay in his parents' basement. In 2016, Jeff was traded from the Atlanta Hawks to the Indiana Pacers, who are based in Indianapolis, which is where he and his family are from. Instead of house shopping, Jeff moved in with Mom and Dad — he'd actually purchased the home years earlier and given it to them — and said the arrangement was just for a year.

Will Heath / NBCU Photo Bank/NBCUniversal via 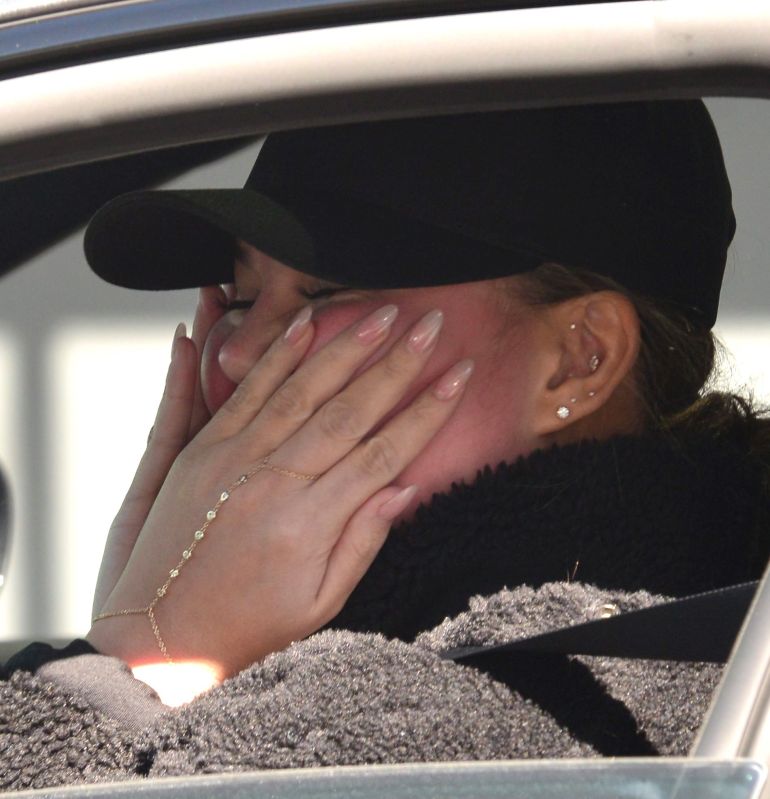