OK, so everyone knows that Awkwafina is funny. However, in "The Farewell" — which hits theaters on July 12, 2019 — the Asian American actress-slash-rapper has a surprise for us: She has a serious side too. During film festival season, Lulu Wang's grief comedy made a splash with critics, who were thoroughly impressed with 'Fina's dramatic acting in the Asian-actor led indie, which chronicles a family's gathering in China — a reunion masked as a wedding that's actually a super-secret last goodbye for the family's matriarch, who's been diagnosed (unbeknownst to her) with stage 4 lung cancer. Before you catch the flick on the big screen, you might want to catch up on some things you don't know (but should!) about Awkwafina…

RELATED: Things you don't know (but should!) about Tessa Thompson

1. No, Awkwafina is not her real name

Born Nora Lum on June 8, 1988, she had lonely childhood — she was just 4 when her mother died after a long, slow battle with pulmonary hypertension. That "traumatic event," Awkwafina told Porter in 2018, is what she believes sparked her "comedic sensibility… I think I developed and used humour very early as a defence mechanism, to make people around me feel joy instead of sorrow. That was when I started to perform." What's now her professional name actually started as a joke amongst her teenage friends. (She started going by "Aquafina" but changed the spelling to avoid a lawsuit from the water brand.) "There is a duality between Awkwafina and Nora," she told The Guardian in 2018. "Awkwafina is someone who never grew up, who never had to bear the brunt of all the insecurities and overthinking that come with adulthood… Nora is neurotic and an overthinker and could never perform in front of an audience of hecklers." She goes by Nora "most of the time," she told The Guardian. "But when I'm in a good mood, I'm Awkwafina. When I'm in a bad, sad, lonely mood, it's Nora all the way."

RELATED: Things you don't know (but should!) about Kate Beckinsale

2. Her paternal grandmother was one of her early role models

After the death of Awkwafina's mom, her paternal grandmother stepped in and became a maternal role model. "My grandmother was everything to me. She taught me that Asian women are strong, they're not meek orchard-dwelling figures," she told The Guardian. "She always knew I had something, not even star power but spunk — she got me singing lessons and we didn't tell my dad, because he'd be like, 'Why would you waste money on that, that's just stupid.'"

RELATED: The most successful film franchises of all time

3. She's a New York native who went to a famed high school

Awkwafina was born in New York City, grew up in Queens and has spent most of her life residing in the Big Apple. She attended the famed Fiorello H. LaGuardia High School of Music & Art and Performing Arts there, where she studied classical and jazz music.

4. She has a degree in journalism

She continued her education at the State University of New York at Albany and graduated with a degree in journalism. Awkwafina — who briefly worked as a publicity assistant at a publishing company — once told Mochimag.com that she was influenced more by writers than musicians, listing Charles Bukowski, Anais Nin, Joan Didion, Tom Waits and Chet Baker as a few of her biggest inspirations.

5. She started her career in entertainment as a rapper

A year after college graduation, on her 24th birthday in 2012, Awkwafina released the comedy rap track "My Vag" — a spoof response to Mickey Avalon's "My D—" — and her YouTube video went viral. She was fired from that publicity assistant job and her father went "ballistic," she told The Guardian, but her move into music proved to be fruitful. Soon after, she received an email from an A&R executive at a major record label, and though that particular meeting didn't work out (read her funny Twitter post about it here), she went on to release two major label albums, "Yellow Ranger" and "In Fina We Trust."

6. She honed her comedy chops on an MTV show

After gaining a huge following on YouTube, Awkwafina scored a role on the third season of the MTV comedy show "Girl Code," which aired in 2014 and gave her a chance to show off her wit. She's seen here with co-stars Carly Aquilino and Nessa Diab at the 2015 MTV Video Music Awards.

In 2014, Awkwafina scored her own late night talk show aptly titled "Tawk." She described it to Mochimag.com as a "ratchet talk show." She often hosted it from corner stores and laundromats, outfitting herself with an octogenarian sidekick and sometimes even had her grandmother, Grammafina, host a segment.

8. She studied Mandarin in China for two years

After high school, Awkwafina moved to Beijing to study Mandarin at the Beijing Language and Culture University, which sparked a bit of an identity struggle for her. "I really felt like I was negotiating two identities in China," she told Defining Cultures. "As an Asian American going to my motherland, and not speaking Chinese, I really felt the struggle of not being Asian enough. And in America, not being American enough. So I really got the shock of having two identities in China. That was really hard for me."

She might have a big personality, but Awkwafina is actually pretty short: The actress-rapper is just 5-foot-1. (She's seen here with actress Laverne Cox — who's 5-foot-11 — in 2018.)

10. She's still afraid to spend too much money

Sure, she's made loads of money as an actress, author and rapper, but don't expect to see Awkwafina blowing it on big-ticket items. "I still live in the same apartment that I've always lived in. I'm still really, really cheap — like an Asian grandma cheap," she told Newsweek in 2018 after starring in "Ocean's 8." "The nicest thing I bought was a Gucci fanny pack. I'm scared to spend lumps of money because in the back of my head I still don't know what's going to happen in my future."

In 2015, the New York native published her first book, Awkwafina's NYC. The quirky travel guide, which is available on Amazon, gives readers an off-the-beaten-path tour of her hometown. Stops on her tour include "10 places to pee" and helpful instructions include "DIY lessons such as urban canning."

Awkwafina hosted "Saturday Night Live" in October 2018, making her the second Asian American actress to ever host the iconic show. In her opening monologue, she revealed that she was inspired by Lucy Liu, who was the first. (Lucy hosted "SNL" nearly two decades earlier in December 2000.)

13. Her first major movie role was in "Neighbors 2: Sorority Rising"

Awkwafina's first role in a major motion picture was in the 2016 Seth Rogen, Rose Byrne and Zac Efron comedy "Neighbors 2: Sorority Rising." In the film, she took on the role of Christine, a sorority girl. She relished the chance to play one of the "real girls — stoners, misfits, wallflowers," she told ScreenSlam at the movie's premiere. "That's what it's about, a celebration of that."

"This is probably the best year of my life," Awkwafina told CNBC about 2018, which is when she became a player in Hollywood thanks to starring roles in two blockbuster films, "Ocean's 8" and "Crazy Rich Asians." Both flicks were a success at the box office, with "Crazy Rich Asians" — the first Asian American-focused studio movie in 25 years — getting nominated for several major awards. (Awkwafina stole the show as Peik Lin, pictured, the hilarious college friend of lead character Rachel Chu.)

Awkwafina refuses to marginalize her culture. "I've walked out of auditions where the casting director all of a sudden changed her mind and asked for accents. I refuse to do accents… So far, like a lot of the parts I've gone out for have been really real characters and being Asian is not part of their plot line," she told Vice. "I'm OK with having an Asian aspect if it's done in a genuine way. I'm not OK with someone writing the Asian experience for an Asian character. Like, that's annoying and I make it very clear, I don't ever go out for auditions where I feel like I'm making a minstrel out of our people."

16. She's about to get animated

Awkwafina will lend her voice to "The Angry Birds Movie 2" in August 2019 (her character, Courtney, is seen here on the left) and to the latest installment of the SpongeBob SquarePants franchise in 2020's "The SpongeBob Movie: It's a Wonderful Sponge." Cyndi Lauper and co-writer Rob Hyman are working on original songs for that film, which will be the first 3D computer animated SpongeBob movie. 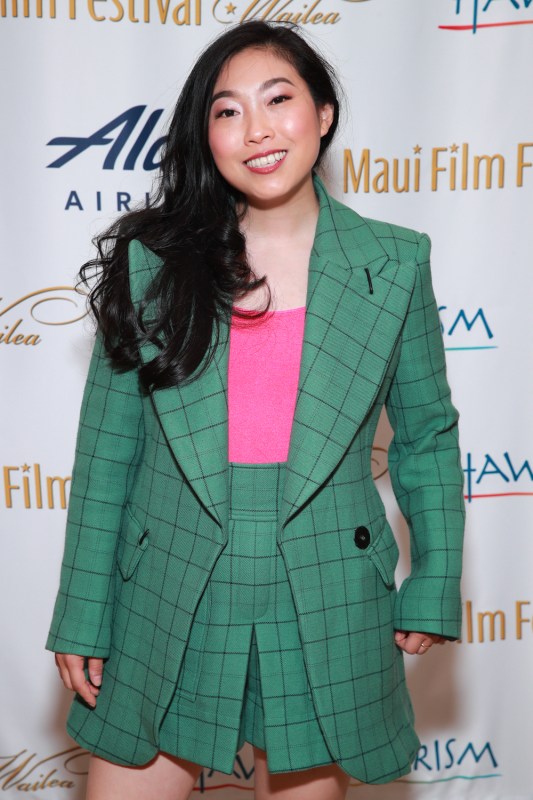 Up Next Things to Know