Headlines about Pete Davidson and Kate Beckinsale's hand-holding hangouts may be raising some eyebrows, but the only thing sending Ariana Grande's brows skyward is that super high, super tight ponytail. TMZ's cameraman caught up with Pete's former fiance as she and some friends and her mom headed from an interview to find a bite in Culver City this week. While she was mostly hounded for a comment on her decision not to play the Grammy Awards, the pap also asked if she thought of her 25-year-old "SNL" star ex and the gorgeous, 45-year-old British actress made a good couple. "So cute!" Ariana hollered over her shoulder. She and Pete split last year after a whirlwind romance and engagement. She's since released two singles

Justin Bieber and Hailey Baldwin have both been very open about their Christian views, but neither has said much about their religion factored into their engagement and subsequent courthouse wedding. As they plan a big destination second wedding, the husband and wife take over the cover of Vogue's March issue, with Hailey in a cream-colored, bride-inspired, if not bridal, gown as she sits in the lap of her man, who, shirtless, looks a bit less wedding-ready as he bares his many tattoos. In the accompanying cover story, the singer, 24, says he was celibate for a year until he married Hailey. In part, he said that's because he has a "legitimate problem with sex," explaining: "God doesn't ask us not to have sex for him because he wants rules and stuff. He's like, I'm trying to protect you from hurt and pain … I think sex can cause a lot of pain. Sometimes people have sex because they don't feel good enough. Because they lack self-worth. Women do that, and guys do thatm," he continues. "I wanted to rededicate myself to God in that way because I really felt it was better for the condition of my soul. And I believe that God blessed me with Hailey as a result. There are perks. You get rewarded for good behavior." He put a timestamp on his pre-marriage celibacy, too, and Cosmo points out it indicated his brief reunion with ex, Selena Gomez, took place when he said he was not having sex. Then Hailey, whom he met in 2009 and dated for a bit, came back into his life. "When I saw her last June, I just forgot how much I loved her and how much I missed her and how much of a positive impact she made on my life," Justin recalled. "I was like, 'Holy cow, this is what I've been looking for.'" Hailey, meanwhile, seemed to imply Justin had cheated. "Negative things happened that we still need to talk about and work through. Fizzled would not be the right word — it was more like a very dramatic excommunication," she said. "There was a period where if I walked into a room, he would walk out." When the pair saw each other again it was June 2018. They dated for three months before Justin proposed and got hitched in September. Their second, larger wedding is currently in stage 2 planning mode; they previously sent out save-the-date notes then changed their minds. They're reportedly thinking about doing something in the tropics.

"Holy moly!" That's how a stunned Jimmy Fallon reacted to seeing the sparkler Liam Hemsworth slipped on Miley Cyrus' finger. Liam stopped by the "Tonight Show" this week and seemed more than happy to dish on details about the bauble his new wife is now proudly wearing. Asked "what kind of rock" he got her, Liam told Jimmy, "There's a few different rocks on there, not to brag, but there's a couple different ones," according to ET. "I thought it was CGI when I first saw that. I was convinced that it was CGI because it did a full-on bling." Jimmy then quipped that perhaps Miley used her "magical powers" to get an over-the-top ring, to which Liam conceded, "She does. She's brainwashed me." Miley and Liam said "I do" on Dec. 23.

Hmm, does Selena Gomez have a newly blond new admirer out there? Fans noticed this week that Zac Efron — whom ET correctly describes as a "known-to-be-single hottie" started following Selena Gomez, who fits in the same category, on Instagram. Among the fan fantasies of a blossoming romance was a still from Zac;s movie, "Charlie St. Cloud," that the fan had edited Selena into. Alas, she was not in the movie — and she's said she's mostly not on the Internet or social media these days. She did, however, appear in "Neighbors 2: Sorority Rising," as the sorority president to Zac's fraternity president character. Granted, it was years ago but Zac once told ET his costar in the 2016 is "awesome" and "super talented." So rumor it up, kids.

Cardi B refused to go to marriage counseling with Offset

After his onstage plea for Cardi B to take him back, it's no secret Offset has been the one pushing to work things out since the two split. It turns out the Migos artist also begged his wife to seek couples therapy with him. "I decided on my own. Nobody makes my decisions about my life but me. I didn't want to go to marriage counseling." Cardi tells Harper's Bazaar. "He suggested it, but it's like, 'I don't want to go.' There's no counselor or nothing that could make me change my mind." Cardi announced her marriage was in December amid rumors he'd cheated. He denied those claims and while it's unclear if Cardi was satisfied with that, they did hang out together in Atlanta ahead of the Super Bowl last weekend. At the time, Cardi told ET she and Offset were "working it out," but "taking it slow." She also apparently has other options. She says she's heard from lots of would-be suitors, but between the gossip that would start and what a sudden new man could mean for the 6-month-old daughter she shares with Offset, she doesn't sound interested. "It's like, 'Bro, why would you want to holler at me right away? You're weird, '" she says. "If you think Imma automatically hop onto you after a marriage that just means you think I'm a sleaze. And I'm not. I have a kid — I have to show an example." So will she and Offset get back together? Cardi's clearly still conflicted. Asked point blank, she tells the reporter: "I don't think so," followed by, "Who knows? You never know, you can never tell."

For years, Gigi Hadid felt a mix of helplessness and independence because of the Lyme disease her mother, Yolanda Foster suffers from. Gigi's brother and sister Anwar and Bella have Lyme disease as well, and as she explains in the new issue of Elle, there were lots of times when she filled in for Yolanda on duties a mom would normally be in charge of. "Growing up, having three of my family members sick made me very independent," Gigi says. "My mom couldn't drive or get out of bed some days, so I took my brother to school with me, or I made lunch. But I also felt a lot of guilt for being the one person in the family who didn't understand what they were going through," she adds. "It's hard when your whole family is in pain and you don't know what to do." Gigi, 23, didn't avoid illness altogether, though. She suffers from an autoimmune disorder called Hashimoto's disease that affects the thyroid. "As a 17 and 18-year-old, I was prescribed a medication that many people start taking when they are 50, and it can lead to bad things if you take it for too long," Gigi recalls. "So my mom looked into some holistic treatments. Also, in California, I went to see a doctor for CBD treatments. You can make a life for yourself in ways that won't hurt your body."

Cher is still using one of the most Cher lines ever. The singer recently went back on the road for her first tour in five years. Though she's 72, she's still rocking plenty of partially nude, entirely outrageous looks (as would we, had we been born with the good fortune to be Cher). Among the highlights of the show, according to reports from recent performances in the Gulf South, Tennessee and Cleveland, has been the quip she pairs with a dark sequined dress, massive orange hair and a headdress that falls somewhere between horns and Medusa territory: "What's your granny doing tonight?" According to ClevelandScene, she then disappears for a quick costume change and returns, riding an elephant. Because, like we said: Cher.

It's on! New York Fashion Week kicked it into high gear on Wednesday, Feb. 7, as stars including Kim Kardashian West, Kourtney Kardashian, Heidi Klum, Lily Aldridge, Alessandra Ambrosio and Karolina Kurkova hit the red carpet at the amfAR Gala. The AIDS and HIV research organization focused this year's awards on honoring Milla Jovovich, among others. "When it comes to charitable actives, she gives it her all," Michelle Rodriguez said in introducing her "Resident Evil" costar, according to Variety. After acknowledging the friends she's lost to AIDS as she accepted the Courage Award, Milla posted about the "spectacular night," on Instagram, saying she was "so proud to be honored by the organization for my support of the foundation for almost 20 years."

"Southern Charm" stars Thomas Ravenel and his ex, Kathryn Dennis are still fighting a nasty custody battle — and the network behind the show doesn't appreciate being involved. The Blast reports Bravo and producers of the reality show want a lawsuit he brought against them dismissed on grounds it was filed in the wrong venue and is actually part of the custody dispute. The initial suit, filed in November, reportedly deals with footage filmed years before Ravenel was fired from the show that includes the kids he shares with Kathryn. Ravenel wants Bravo mandated not to show footage he claims involves Kathryn and the kids talking about the custody battle. According to The Blast, Bravo says Ravenel is "trying to unlawfully impose restraints on a media company in violation of their first amendment rights," adding that was cool with having the kids filmed prior to being cut from the cast. "Ravenel's actual interest appears to be to prohibit anyone besides himself from maintaining a public platform to discuss this lawsuit now that he is no longer a cast member on 'Southern Charm,'" the network alleges. Ravenel is also preparing to go to court to defend himself in a separate sexual assault trial.

Adrian Grenier's new social entourage includes members of the four-legged and furry variety. A spy tells Page Six the "Beyond the Night" executive producer stepped out in New York City this week with "a mystery woman" for a bite at Scarpetta on Madison Avenue. They weren't alone. The pair reportedly had two pooches with them at the high-end restaurant. "Adrian was telling the hostess that the dogs — dressed in vests — were service dogs," says the source. "Adrian and his lady friend were kissing in a corner banquette in the restaurant's bar area." The pups, meanwhile., are to said been "well-behaved" as they "enjoyed a night out on the town." 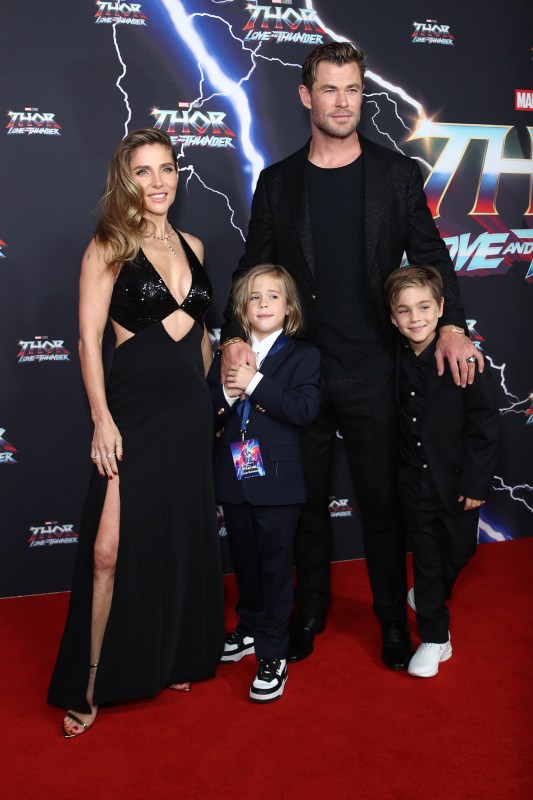