Brooke Burke wants to 'learn from the challenges' of her divorce, plus more news

As David Charvet continues staying mum on his split from Brooke Burke, his soon-to-be ex-wife seems determined to keep talking about her experience in the hope of finding its silver linings. On the Tuesday, April 17, edition of "Steve," Brooke joined Tami Roman and Tamar Braxton in a frank talk about divorce. After Steve Harvey referred to Kaley Cuoco's revelation that she'd found at some point that Ryan Sweeting had become another person than the man she married, the host asked, "So how can people avoid letting one bad relationship experience ruin future relationships?" Brooke had a different take on the matter. "But isn't that about learning along the way?" she asked (via E! News). "I mean, you know I just recently filed for divorce so this is all very fresh and vulnerable for me. But my goal and my prayer is to move forward with an open heart and to take the beautiful memories and to learn from the challenges that I faced and not to bring all the baggage, which is mine, and pass it on to someone else whenever that day comes." Realizing all those goals could be harder than she knows yet, she added, "It's easier said than done, ask me in six months…"

Congrats are in order for Zac Efron's younger brother, Dylan, who completed the Boston Marathon in just under three hours thanks in part to the cheers he heard from his brother on the sidelines. In a video shared on social media, Zac hollers, "Yeah, Dylan! Yeah, let's go, dude! Yeah, dude!" as his sib makes his way across the finish line in the chilly, wet spring weather. "What's the point of all the finish lines we cross in life if there's no one there to celebrate with?" Zac captioned the clip (via E! News ). "This used to get me down when I felt alone—There's many reasons BTW—Ima be at every [race] with you from here until forever, Brother. Congrats @dylandefron #marathon #bostonmarathon #letsgo." Dylan later shared a post of his own, checking the experience off his bucket list. "First Boston marathon [check]," he wrote. "Cold, windy, rainy…but what a memorable day. @zacefron and @coourtking waiting for me at the finish was all the motivation I needed."

Kevin Federline's not the only parent in Hollywood who thinks his famous ex should cover more in child support. On the heels of K-Fed's request for more dough from Britney Spears to cover their kids' expenses comes new Jeremy Renner's ex, Sonni Pacheco, will be getting a greater cut of her former husband's income to use towards the care of their 5-year-old daughter, Ava. According to TMZ, Jeremy and Sonni have agreed to new terms for their child support deal given the $11.4 million per year Jeremy's reportedly earning. That amount is more than it was when the two decided he would fork over $13,000 per month, plus 5 percent of anything he earned over $2.3 million. Going forward, that percentage will be much larger because of his additional income. He will continue to pay $13,000, TMZ reports, but could also be looking at up to $200,000 a year to cover the overage expense. Beyond that figure, additional funds will be invested in a trust for Ava. She won't be able to touch it until she turns 27. Sonni filed for divorce from Jeremy in December 2014.

"It wasn't me." That's how Bella Hadid responded to one of multiple reports suggesting she made out with her ex, The Weeknd, during Travis Scott's set at a Poppy nightclub pop-up at Coachella over the weekend. Bella posted the comment on an E! News Instagram alert about the alleged PDA and whether it could mean the two were back together. Us Weekly and People posted similar reports, citing sources who claimed to have seen Bella and The Weeknd "all over each other" and kissing. The following night, The Weeknd looked cozy with Justin Bieber's ex, Chantel Jeffries, who seems not to have gone out of her way to deny reports the two spent some quality time together at the festival.

Just weeks after another stalker was ordered to stay at least a mile away from Taylor swift and her relatives following multiple scary attempts at communicating with the singer, another man was arrested and booked for felony stalking outside her home in Los Angeles. TMZ reports the man was spotted by security before police arrived at the mansion on Saturday, April 14, and questioned him. He reportedly told them he had driven to meet Taylor — from Colorado. As of Tuesday morning, the man was still in custody while police worked on getting an emergency protective order to keep him away from Taylor. A third man was also reportedly arrested this spring for trying to "scale a wall" outside Taylor's house, according to the website.

Kendrick Lamar made history on Monday, April 16, when he became the first rapper to win the Pulitzer Prize for music for his album, "Damn.," which the prize committee described as "a virtuosic song collection unified by its vernacular authenticity and rhythmic dynamism that offers affecting vignettes capturing the complexity of modern African-American life." Praise began pouring in quickly on social media as fans, famous and otherwise, posted congratulations as a way of marking the important moment. Among the celebs who commented on the news were Common, who tweeted, "Amazing! Kendrick Lamar won a Pulitzer Prize for his album DAMN today. He is officially the first non-classical or jazz artist to win the Pulitzer Prize in music!" and Busta Rhymes, who simply posted, "POWERFUL!!! Congrats King @kendricklamar." Reese Witherspoon weighed in as well, writing, "Congrats to @kendricklamar for winning a #pulitzerprize for your provocative , groundbreaking work. 🌟Keep speaking truth," while Martin Lawrence posted, "Making History! Congrats to @kendricklamar on his history making Pulitzer award. Well deserved!" Ellen DeGeneres added that his win "feels about right" and called it "incredible," and Anthony Bourdain tweeted, "Congratulations @kendricklamar on your Pulitzer win. The album was brilliant and deserves every accolade." Charlamagne Tha God, meanwhile, offered this context: "August Wilson, Thelonious Monk, Alex Haley, Toni Morrison, John Coltrane, Duke Ellington, Kendrick Lamar….just thinking of all the Pulitzer Prize winners I know and K Dot names sounds pretty damn good amongst them. Congrats to that brother! I'm inspired!"

Newlyweds Amy Schumer and her award-winning chef husband Chris Fischer have been pretty low-key about their surprise February wedding. But in a recent interview with E! News pegged to her appearance in "I Feel Pretty," Amy dished on what's changed for her now that she's married. "The best part is just having a partner and being like 'I got a team,'" she mused. "It was just me and [my dog] Tatiana and now it's cool, you got someone to go through life with together that you love and you want to be partnered up with." The comic added that Chris is "proud" of her new movie, which stars Amy as a woman with low self-esteem who has an accident that makes her see herself as a supermodel.

Amber Portwood downplayed the situation when she and Matt Baier split, saying she thought therapy "could help" and implying she was simply fed up with his behavior. As she told Dr. Drew in a preview for the Monday, April 16, "Teen Mom OG" reunion, the breakup hit her hard. "The main thing is when I was going through everything after me and Matt broke up, people have to understand, I was with that man for three-and-a-half years. It was a really horrible relationship. It was an abusive relationship – mentally and physically," she says in the clip (via Us Weekly). "It turned me into a really unhappy, depressed person and I couldn't keep going on with that. When I found out that he possibly cheated on me, that was the end because I can't stay with a man who would ever do that to me. When it ended, I spiraled out of control." Asked if that meant she was able to stay sober at the time, she admitts she was not. "No, I was drinking horribly. I might not have been doing a lot of drugs and things like that but I was definitely trying to drown my sorrows," she says. These days, Amber takes medication for depression that she's said is safe for pregnant women (she and her current boyfriend, Andrew Glennon, are expecting their first child). Speaking to Us in March, Amber explained: "One of the main therapeutic things that I wanted to do is a blog for people who have mental illnesses and want to share their stories about how they overcame certain situations, just to show people that we're all in this together."

Nina Dobrev says she'll be the babysitter if her best friend, Julianne Hough, has kids

Julianne Hough married Brooks Laich nearly a year ago. That could mean kids are on the way at some point, but Julianne's bestie Nina Dobrev, who was a bridesmaid at the wedding, isn't worried about her friendship changing. "I'll just go from best friend to babysitter," Nina recently told People in a joint interview. Her pal jumped in to point out they're both moms to their pets, saying, "We're already parents, we already have kids. They're just furry kids," and suggesting they'll probably be similar to parents to "actual" babies someday. "We're those moms that take our kids everywhere," Julianne said."I think that's how we'll be in the future, too." Nina agreed. "Our kids are going to come out on every trip with us," she said with a smile. "They are going to jump out of planes with us."

In a new video interview between Benedict Cumberbatch and YouTube star and singer Sophia Grace, the "Doctor Strange" star shares advice for kids who may be dealing with bullies at school or online. He admitted that bullying is "a really, really difficult topic" to discuss, he suggested that the best approach was to put yourself in the shoes of the bully and realize where their impulse to act negatively towards others was coming from. "As hard as it may seem, you have to meet it with love," he said (via the Daily Mail). "You have to try and empathize with the hate — not hate yourself — but understand why people often want to damage other people is because they're damaged themselves. And if you could just turn that mirror around a little bit on them it might cause it to quell it slightly." Benedict, who has two young sons, also advised viewers not to get sucked into the claims or taunts a bully might make. "And to stand on your own two feet, to have your own self worth unaffected by bullies," he said. "They don't really know the real you, they just want to get at something to feel better about themselves." 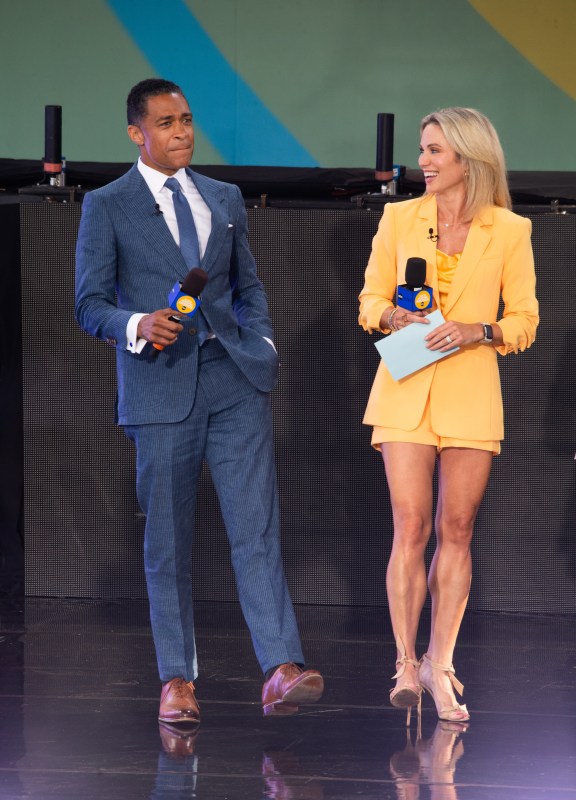