Emma Stone could be a married woman before we know it! A source tells Page Six the actress and her fiance, comic, writer and director Dave McCary, plan to say "I do" in Los Angeles in the next few weeks. There's a good chance that's the last we'll hear about the wedding until after they tie the knot, though. Neither the bride nor the groom-to-be shares much in the way of romantic details on social media — with the exception of Dave's Dec. 4 engagement announcement, which showed the two looking adorably giddy as Emma thrust her ring at the camera while cozying up to her man. Emma, 31, and Dave, 34, first sparked romance rumors in October 2017, a year after they met on the set of "SNL" when Emma was hosting and Dave was working as a segment director.

Miley Cyrus and Cody Simpson are still going strong — and they've got some matching new ink to prove it. Hollywood Life noticed the pair's go-to tattoo artist Nico Bassill posted shots of the small tridents he etched on Miley's left wrist and Cody's left arm this week. The symbols reference Cody's new book, "Prince Neptune," hence the quote in Nico's caption: "Some mornings it's like the sun rises only for her." It's reportedly a line from Cody's forthcoming collection of writing. The couple has made at least a few trips to see Nico together in the past. But as far as we know, the tridents are the first matching tats for the two.

Reese Witherspoon is feeling 'heavy-hearted' and overwhelmed this week

Reese Witherspoon is giving her Instagram followers a digital breather. On Wednesday, March 4, the actress shared a photo of her son standing on the edge of the ocean. In the caption, she explained how someone recently gave her the space she needed to react to all the things that have been going on in the world this week. It meant everything to her. "This morning, a friend said to me, 'I can see you are overwhelmed. Just take a moment,' and I started to cry," she wrote. "I just felt so heavy-hearted. There is so much happening… a devastating storm in my hometown of #Nashville, people suffering from [a] mysterious illness, people arguing over political ideology. So much hate and tension and discord. Honestly, this week has been a lot. And it's only Wednesday.😳" She went on to admit times like these make her "want to crawl in a hole." "But my friend offered me a moment. To just feel sad. So I wanted to offer it to you all," she continued. "A moment or a day or a week. Take what you need. Remember that pain is inevitable. But friends who hold your hand and kids who laugh at silly jokes and sunsets that light up the sky and chocolate chip cookies are very real too. We are in this together. Let's take care of each other. And remind each other of all the GOOD. ✨" Hear, hear.

RELATED: The business of being Reese Witherspoon

Reese Witherspoon's far from the only American feeling heavy-hearted this week. After tornadoes ravaged Nashville, killing at least 24 people on Tuesday, March 3, Taylor Swift, who moved to Music City as a teenager, has donated $1 million to the Middle Tennessee Emergency Response Fund, according to the Tennessean. "Nashville is my home," Taylor posted on Instagram on Thursday, March 5. "And the fact that so many people have lost their homes and so much more in Middle Tennessee is devastating to me." The donation comes a year after Taylor forked over $113,000 to the Tennessee Equality Project. She's also given large donations to the Nashville Symphony, local music education programs and relief efforts that followed flooding in Nashville in 2010.

Katy Perry couldn't fool her mom about her pregnancy

Shortly after she confirmed her pregnancy on Instagram Live this week, Katy Perry joked on Twitter that she was "so glad" she no longer has to "suck in" her belly now that she's gone public with her baby news. But there's one person "sucking it in" apparently didn't fool: Katy's mom. During an interview with Sirius XM on Thursday, March 5, Katy explained that she told friends she and Orlando Bloom are expecting by putting an announcement on a bottle of wine she could bring to folks as gifts. That's not how it went down with Katy's mother, though. "My mom, it was so weird," Katy said (via USAToday). "I didn't get the chance to do it because she just came over and was looking at my wine, which she never does, and she was like, 'What is this?' And that's how it happened." Added the singer: "I guess moms have intuition unlike any other."

Adorable much? Duchess Meghan arrived in London on Thursday, March 5, where she caught up with her husband Prince Harry for their final round of engagements as senior members of the royal family. They couldn't have looked more in love — even as a burst of rain tumbled out of the sky while they were heading into the Endeavor Fund Awards at Mansion House. Photos from their stroll showed the two staring into each other's eyes with huge grins on their faces as camera lights lit up the rain around them. The pics quickly went viral, suggesting the two have more supporters like Harry's pal David Beckham than detractors right now. At the beginning of the year, Harry and Meghan controversially announced they were exiting their royal posts and would be living part-time in North America while pursuing financial independence from the crown.

Eva Mendes admits she 'struggles with food,' tells fan her photo had to be 'retouched'

Eva Mendes wants fans to know the truth about what they're seeing when she posts photos of herself on Instagram. After sharing a shot in which she's showing off a dress from her Eva by Eva Mendes line at New York & Company, someone noted in the comments how "amazing" she looks and thanked her for being open to chatting with her followers. Eva could have let the comment go but instead, she replied, both to show her own appreciation for the communication and to tell the fan the image had been edited. "Thank you for saying this. I take so much joy from connecting to other women. It means so much to me. Even just a quick exchange. I struggle with social media but I love the constant connection with women," Eva wrote (via Today). "I try to post responsibly and I try to make sure I don't portray myself in a way that makes other women feel bad. Instagram can be hurtful in that way." Before signing off, she added that the image had been "retouched," telling fans: "I want women to know it takes a lot for me to look this way and that I struggle with food among many other things." The actress launched her clothing collection in February 2013.

Police were called to Ariana Grande's home in Los Angeles this week in what turned out to be another celebrity swatting incident. According to TMZ, someone called the LAPD to report shots had been fired at the house. The outlet reports police suspected the call might be fake since Ariana's been targeted by swatters in the past. Sure enough, they arrived to find nothing was wrong. It's unclear whether the singer was home at the time.

David Foster, 70, announced this week he's been forced to postpone a leg of his tour for health reasons. "It is with great sadness that I have to reschedule my March tour dates due to an unexpected medical procedure," he posted on Instagram on Friday, March 6. "I'm well on the road to recovery but my doctors insist that I spend the next several weeks recovering," he added. "I love touring and performing so this is not an easy decision. However, we will do our best to reschedule the dates. My tour will resume in Waterbury, CT on April 17th and I look forward to seeing you then." David, who's joined for part of the tour by his wife Katharine McPhee, didn't elaborate on his health situation.

Drake wants his owl back. The rapper's OVO company, which owns the owl he seems to slap on everything from clothing to million-dollar pendants, has filed a lawsuit against two companies for trademark infringement. TMZ reports OVO is going after Australian company Bellroy and the Los Angeles-based brand Clae for teaming up to make products featuring an owl that looks similar to OVO's signature image. Legal documents allege Bellroy "changed the design of the owl by altering its posture, width, wings and feet in order to blatantly mimic the OVO owl" and claims the similarities were intentional. OVO also claims Bellroy's merchandise now includes footwear and clothing, both of which are central to what OVO brands with its owl. Drake's company further claims Bellroy and Clae are trying to profit by misleading customers into thinking they are affiliated with OVO; OVO is asking for an injunction to stop the brands from using the owl as well as profits and damages, according to TMZ. 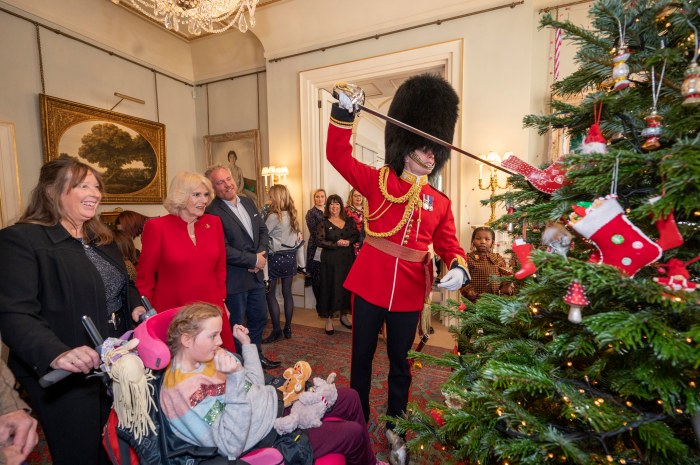 Up Next A Royal Christmas