Alex Rodriguez could could join J.Lo, Marc Anthony and their kids for Father's Day

Post-breakup #goals, anyone? Jennifer Lopez has moved on from her ex-husband, Marc Anthony, with Alex Rodriguez, but that doesn't mean A-Rod can't be involved in a family holiday. With Father's Day around the corner, E! News asked Jennifer if she and Marc might celebrate with their kids — and Alex and his kids. "It's possible," she said this week in Las Vegas, where she recently invited Alex's daughter onstage with her. "It's so great. Everybody gets along so well. We're so blessed. We have beautiful children; we have love in our life and we're just great."

Christina El Moussa's new boyfriend has a dark past: Report

Should Christina El Moussa reconsider her rumored romance with Doug Spedding? According to court documents published by InTouch, Christina's new flame has had multiple domestic violence arrests, plus a felony drug possession charge. He was also charged with violating the protective orders stemming from the domestic violence charges five times between 2010 and 2011. In 2010, an order required him to stay away from the mother of his two children,, according to the magazine. The woman involved later requested and was granted a "peaceful contact … for joint counseling." The drug charges, felony drug possession and misdemeanor possession of drug paraphernalia, were dismissed after Doug attended an 18-month diversion program. One more potential problem InTouch discovered? A woman named Tracy Diaz says she's dating Doug, telling the tab: "I've been seeing Doug for almost four years. He hasn't officially ended our relationship. He was just with me three days ago!"

Is that it for Gwyneth Paltrow and Hollywood? In a new interview with "Extra" (via the Daily Mail), the GOOP honcho said she's prioritizing her company these days — and it sounds like that could be permanent. "I'm not sure how I'll feel about acting going forward. I'm doing just a teensy little bit here and there when I have time, but I am loving running my business," Gwyneth said. "You know, my life has been skewing far more heavily towards my business, and it has to right now that we have so much going on. We're growing so fast (at my company), and it's such an exciting time to be doing what I'm doing." Although Cameron Diaz's reasons were more personal than career-oriented ("I felt the need to make myself whole," she said), Gwyneth's friend and peer opened up at a GOOP event over the weekend about why she, too, has stepped back from acting.

In the wake of a shooting in Virginia that wounded Rep. Steve Scalise, celebrities joined thousands of other Americans on Wednesday, June 14, to offer prayers for his family and, in many cases, to demand a discussion about gun laws in America (via JustJared). "I am saddened by this shooting in our US Capitol. Please #Congress, what will it take for you to act?#gunsafety @Everytown @MomsDemand," tweeted Julianne Moore, a vocal advocate for stricter gun laws since the Sandy Hook shooting. "Prayers and thoughts in Alexandria, with Steve Scalise and his family, and all affected. Horrible," wrote Lin-Manuel Miranda. Mark Ruffalo retweeted Bernie Sanders' condemnation of the shooting, as the shooter reportedly worked on his campaign. Katie Couric, meanwhile, asked, "God what is happening in this country?"

After a terrorist attack killed 22 and injured nearly 60 more fans at her concert in Manchester last month, Ariana Grande sees the world — and the people she cares about — in a different light. That's according to InTouch, which reports the singer is telling friends her boyfriend, Mac Miller, is "the one and she wants to marry him as soon as possible." Says a source: "The attack completely changed Ariana's outlook on life. She's learned that what matters most are the people that you love — and that's Mac. She has no doubt in her mind that he's the man she's supposed to be with."

Ariana Grande isn't the only pop star with wedding bells on her mind this month. Multiple sources tell InTouch Britney Spears hopes to take a trip down the aisle to marry her boyfriend Sam Asghari. "She wants to get engaged to her boyfriend, Sam," says one insider. Adds another: "She thinks Sam would not only be the perfect partner, but he'd be a perfect stepfather to her kids Sean, 11, and Jayden, 10." The diamond ring Brit's been wearing on her ring finger lately isn't doing much to stifle the rumors. "Britney bought herself that ring and has been wearing it everywhere," the second source says, adding that Sam wants to get married, too and that the couple would like to tie the knot in December, after Britney's residency in Las Vegas wraps up. One potential issue? Birtney's dad. She remains under his conservatorship, so he'd have to give a thumbs up to a wedding.

Nothing to see here, folks. Shortly after photos surfaced showing Bella Thorne and Scott Disick getting cozy by a pool in Cannes, Bella took off from France and Scott returned to partying with other women. To some, Bella's departure seemed to suggest she was angry, but to her, it was just the right thing to do. Speaking to Complex, she explained how she met the 34-year-old "Keeping Up With the Kardashians" star — and why she didn't continue spending time with him in Cannes. "I throw a lot of house parties, and that's how I meet these people," she said. "They come to my house party and they're like, 'Yo, I heard you're having a party,' and I'm just like, 'OK, French Montana. Hi, French.' That's how I met Scott — he came to a house party of mine and I was like, 'Hi.'" Explaining that some of the photos made it look like more was going on than what actually happened between the two, she continued: "Scott is really nice, sweet, charming. I don't drink, and he really drinks a lot. It just ended up … I just wasn't down. I was like, 'I gotta leave.' We were [in Cannes] a day and a half before I was like, 'I'm booking my flight and leaving.' I love to go out and have fun, I love to f–king dance, but I just don't party hardcore like that and it was way too much for me. I was like, 'Woah, this is not the way I live my life, bruh.'"

Bill Murray showed up at another party in Brooklyn

Ain't no party like a Bill Murray party …. America's favorite party crasher reportedly stopped by the opening of a new restaurant, Cecconi's, in New York's DUMBO neighborhood this week. "He was seen walking along the waterfront with a group of friends earlier in the night towards the carousel. He must have seen the party going on, because a while later, he came back and joined the party, where the drinks and lobster spaghetti had been flowing free all night," a guest told the New York Post. The actor reportedly became the "life of the party" (because Bill Murray) and encouraged folks to check out his son Homer Murray's new restaurant, 21 Greenpoint in Brooklyn, where Bill bartended once last fall. ("What my dad lacks in experience," his son told Eater, "he makes up for in tequila.") "I live a little bit on the seat of my pants, I try to be alert and available … for life to happen to me," the "Lost in Translation" star said recently. "We're in this life, and if you're not available, the sort of ordinary time goes past and you didn't live it. But if you're available, life gets huge. You're really living it."

Celine Dion, who's preparing to cross the pond for her 2017 European tour, announced this week she's teaming up with Nordstrom for her Fall 2017 lifestyle collection. "I'm excited at this opportunity to launch my collection with Nordstrom," she said in a statement, according to Billboard. "They're a wonderful company with great stores, and I'm proud to be associated with them along with my partners at The Bugatti Group, Epic Rights and Prominent Brand + Talent. My collection is all about affordable luxury, and we've created beautiful designs with excellent quality and I can't wait for everyone to discover all of this at Nordstrom." Pieces in the collection, which include clothes, totes, backpacks and more, will be available in August.

Lookin' good, Lake! It's been less than two weeks since Lake Bell's rep confirmed to People that the actress had given birth to her second child — a boy — with husband Scott Campbell and the actress looked stunning in a ruched, navy blue dress at the Women In Film 2017 Crystal + Lucy Awards on Tuesday, June 13. The couple, who are also parents to 2-year-old Nova, have not shared any further information about their new addition's name or the date when he arrived. "My happy place is holding my daughter and my husband in the same hug," Lake, 38, told People last year. "It really is." 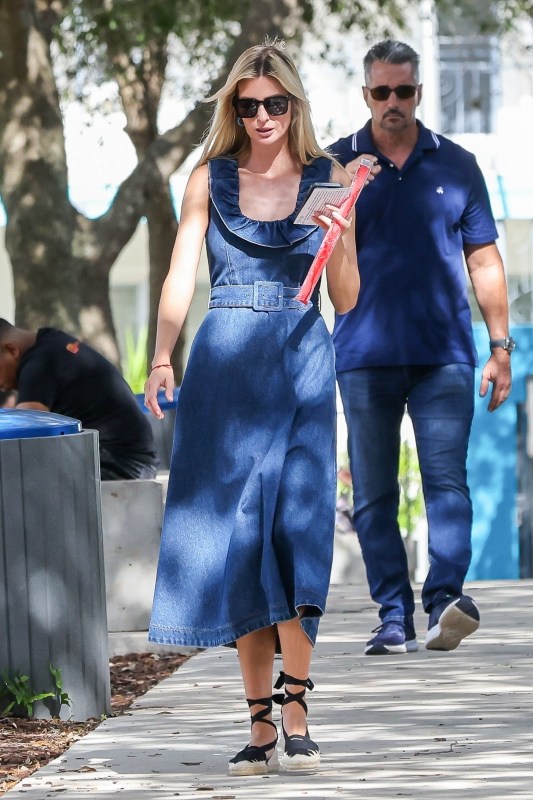