The under-cover romance between Katie Holmes and Jamie Foxx continues … The famously private couple stepped out for dinner together in New York City on Sunday, April 22, according to multiple outlets. Katie, clad in a hat that obscured some of her face and a flowing kimono, joined Jamie for about an hour and a half at Nobu's downtown location, according to E! News. Photos published by Us Weekly show them leaving separately after their meal. Despite previous reports suggesting the two could go public soon, an insider tells E! they're happy with the level of privacy they've been able to maintain. "This is what has worked for them and what they are comfortable with. They aren't a couple who is going to stroll down the street holding hands. They just want to stay off the radar and keep it to themselves. They have a routine that works well," says the source, adding that the two are "happy" to "spend time apart" and "be together when they can be." Earlier this year, an ESPN reporter interviewing Jamie about the NBA All-Star Celebrity Game referenced a photo of Jamie and Katie together that was taken on Valentine's Day. Jamie promptly walked out of the interview.

Duchess Kate and Prince William aren't the only royals with big news to announce this week. One day after Will and Kate welcomed their third child, Kensington Palace tweeted a series posts about new plans for the music Prince Harry and Meghan Markle have chosen for their May 19 wedding. "The music will be under the direction of James Vivian, Director of Music, St George's Chapel, including the Choir of St George's Chapel, and a selection of choral groups, soloists, and musicians," the palace wrote, adding that the service "will include a number of well-known hymns and choral works." Two other posts shared details about some of the performers: "19-year-old cellist Sheku Kanneh-Mason, winner of 2016 @BBCYoungMus. Last June, Prince Harry saw Sheku play at an event in London in support of the work of Antiguan charity the Halo Foundation," read one tweet. Sheku, by the way, was the first black person to win the BBC Young Musician Award. A prodigy since childhood and an alum, with his musical family, of "Britain's Got Talent," he's said part of his mission is to attract a more diverse audience for classical music. When he retweeted the palace's announcement about his addition to the service lineup, he said he was "bowled over" when Meghan called him herself to invite him to perform. The second act the palace tweeted about was award-winning gospel choir director and workshop leader Karen Gibson and The Kingdom Choir. "The Choir is made up of a group of British artists dedicated to creating a sound that demonstrates the community they share, and has been performing both nationally and internationally for over 20 years," the palace posted.

Maybe all that talk about a third "Sex and the City" movie — complete with another obligatory Carrie and Big wedding scene — put Sarah Jessica Parker back in wedding fashion mode. Whatever her inspiration was, SJP launched her first bridal collection on Tuesday, April 24. WWD reports the line's 10 looks are intended for today's "modern, nontraditional bride" and include dresses, bodysuits, skirts and jumpsuits ranging in price from $295 to $2,395, according to Page Six. The pieces are all being sold exclusively on Gilt. "We recognized that there was this space where brides were looking for something that felt different," the actress-turned-designer tells WWD. "The intent is they should be usable outside of that special occasion. Whether you're the person walking down the aisle, or you're attending, these are all pieces that should be relevant in your closet. There are some pieces that feel more decadent and more specifically bridal. There's no law saying they're not appropriate for many other important occasions as well."

Prince's family remains dissatisfied with the lack of criminal charges following the musician's death — so they're suing a whole bunch of folks. In the new filing, estate trustee Michael A. Zimmer is going after the hospital that treated Prince a week before he died, a doctor who treated him there, Walgreen's, a pharmacist and a Walgreen's employee, according to TMZ. The suit claims Trinity Medical Center in Illinois did not properly handle Prince's apparent opioid addiction when he was treated there after suffering a nearly fatal medical event in a plane that had to make an emergency landing. He died of an overdose later the same month. The lawsuit also claims Walgreen's and the defendants connected to the chain were responsible for giving Prince narcotics "for an invalid medical purpose" without ensuring he would be using the drug in a safe manner. Michael Schulenberg, the doctor who allegedly gave Prince opioids via his bodyguard, previously settled with federal investigators for a $30,000 fine.

The Daily Mail couldn't help but notice Chris Pratt, who's been single since splitting from Anna Faris, looked awfully flirtatious on the red carpet with his "Avengers: Infinity War" costar, Evangeline Lilly, on Monday, April 23, in Los Angeles. The pair were spotted giggling and sharing a sweet hug at the celeb-packed event. To be fair, Evangeline, who has two children with her partner Norman Kali, has said the cast all got to be close pals during the shoot, telling fans in Instagram Story that Robert Downey Jr. would host lunch get-togethers on the set. "Usually film stars all go to their own trailers and disappear …," she said in February, according to Marvel Studio News. "But Avengers was the polar opposite of that. It was this community, and it was fun, and people were really warm and kind."

Zendaya's determined to create more awareness about the color bias that exists against darker skinned African-Americans. At BeautyCon NYC this week, she picked up on a thread she discussed with Cosmo back in 2016, when she ackowledged the shade of her skin gives her what she called "a bit of a privilege compared to my darker sisters and brothers." Speaking to Bozoma Saint John (via JustJared), the 21-year-old said: "As a black woman, as a light-skinned black woman, it's important that I'm using my privilege, my platform to show you how much beauty there is in the African-American community." Zendaya went on to say she feels like her skin color is "Hollywood's, I guess you could say, acceptable version of a black girl." Declaring "that needs to change," she explained: "We're vastly too beautiful and too interesting for me to be the only representation of that. What I'm saying, it's about creating those opportunities. Sometimes you have to create those paths. And that's with anything, Hollywood, art, whatever."

As Prince William and Duchess Kate get to know their brand new baby boy, the newest royal's grandfather is happy — if slightly concerned. "We are both so pleased at the news," Charles, 69, said in a statement (via People) on behalf of himself and Camilla, the Duchess of Cornwall. "It is a great joy to have another grandchild, the only trouble is I don't know how I am going to keep up with them." The new prince, whose siblings are Princess Charlotte and Prince George, arrived at St. Mary's Hospital in London on Monday, April 23.

Keshia Knight Pulliam and Ed Hartwell's bitter divorce battle has ended. Ed filed for divorce from the former "Cosby Show" star just one week after she announced she was pregnant in 2016. Custody over their daughter, Ella, has long been a source of contention between the exes. Going forward, Keshia will have primary custody, Ed will have visitation rights, he will pay $3,007 a month in child support and the 1-year-old will take a hyphenated version of both of their last names, according to TMZ. Adultery and "cruel treatment" were cited as the grounds for the divorce.

Closing arguments began in Bill Cosby's sexual assault retrial on Tuesday, April 24, without the comedian ever having taken the stand. Charged with three counts of felony sexual assault, Cosby, 80, skipped speaking in his own defense before a mistrial was called in the same case last year, according to Vulture. The jury this time was sequestered while hearing from 25 witnesses, 15 of whom were called by the prosecution. Among the claims made by Cosby's defense was an attempt to portray his accuser, Andrea Constand, as a liar who framed Cosby in order to extort money from him, though he had already paid her millions to keep quiet about her allegations he drugged and molested her.

Blac Chyna's mom didn't get very far with her $1 million lawsuit against Wendy Williams and the producers of her show. The Blast reports a judge dismissed the defamation, slander and harassment case, which Tokyo filed last year, on April 10 after Tokyo failed to show the court that she'd served Wendy with legal documents. Tokyo claimed last year that Wendy caused a "great deal of hate by saying these nasty irrational despicable things" about Tokyo on "The Wendy Williams Show." She said that because of the harassment she endured, she could neither sleep nor eat. Tokyo reportedly got a warning in February that she needed to deal with serving the legal docs to Wendy or the case would be thrown out. When the judge followed through and tossed the case, Tokyo did not appear to try to get an extension or make one last effort to prove Wendy had been served. 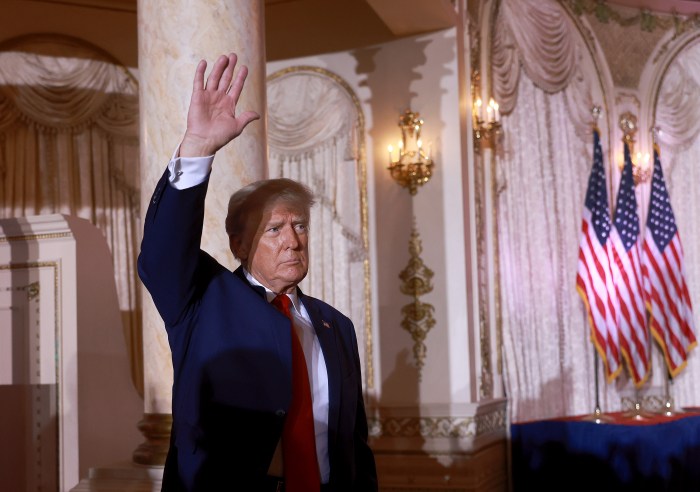 Up Next Trump run reax