Aside from awarding actors the most prestigious trophy in Hollywood, the Oscars can also be counted on to deliver impeccable red carpet fashion. But which stars will be the ones to watch out for? Wonderwall.com is taking a look at the 2017 Academy Award nominees' best looks from awards season so far! First up, Michelle Williams! The "Manchester By the Sea" star, who's up for best actress, wore this silver sequined long-sleeved minidress with a quirky facial design by Louis Vuitton to the EE BAFTA British Academy Film Awards on Feb. 11, 2017.

RELATED: Beauty hits and misses from the 2017 awards season

Emma Stone's 2017 Golden Globes gown was one of our favorites of the season. The pale pink custom creation by Valentino featured delicate silver embroidery, and we loved the subtle homage to her flick "La La Land" with the star detailing. Emma is up for best actress at the Oscars on Feb. 26, 2017.

Ruth Negga wore this stunning gown to the 16th Annual Movies for Grownups Awards on Feb. 6, 2017. The best actress nominee for "Loving" selected this multicolored Valentino creation that featured pink, green, gold and purple sequined detailing and an adorable collar for the event.

RELATED: Fashion hits and misses from the 2017 Grammys

We adored the gown Naomie Harris wore to the the EE BAFTA British Academy Film Awards on Feb. 12, 2017. The best supporting actress Oscar nominee for "Moonlight" chose a dusty pink and nude gown by Gucci featuring ruffles and unique orange flower detailing at the waist.

Best actress nominee Natalie Portman attended the Golden Globe Awards on Jan. 8, 2017, in this show-stopping yellow Prada gown. The unique hue set her apart from other Globe-goers, and it nearly camouflaged her baby bump with its A-line silhouette.

Nicole Kidman looked lovely in Chanel at the Oscar nominees luncheon on Feb. 6, 2017, opting for this pristine white and silver skirt-jacket combo by the design house. The star, who's up for best actress for her work in "Lion," accessorized with silver strappy sandals and tied her hair up in a glam ponytail for the event.

Blue at the BAFTAs! Viola Davis attended the EE BAFTA British Academy Film Awards in this royal blue, pale blue and purple striped Jenny Packham gown. We loved the refreshing color choice on the strapless dress. Viola's nominated for a best supporting actress Oscar for her work in "Fences."

We love Ruth Negga's affinity for collars! The "Loving" star donned another cute collared creation, this time by Miu Miu, at the Oscar Nominees Luncheon. She tied the separates — a sweet pale yellow collared top with a green leather skirt — all together with her yellow shoes.

Looking lovely in Tadashi Shoji! Octavia Spencer went for a glam black dress at the 2017 Screen Actors Guild Awards. The actress, who's up for best supporting actress for her work in "Hidden Figures," rocked this shimmering black gown, which featured a peplum at the waist and sheer netting at the collar.

Michelle Williams stuck with trusted designer Louis Vuitton for the 2017 Golden Globes. For that big night, the "Manchester by the Sea" star sported this off-the-shoulder design, which featured a lace-like fabric. We also loved her accessory addition, which showed just how to pull off a typically casual choker on a red carpet.

Best actress nominee Isabelle Huppert attended the 2017 Directors Guild of America Awards in head-to-toe black. The French actress, who is being recognized for her work in "Elle," added a pop of color to her sophisticated suit with a bold red lip.

Naomie Harris wore this tan confection by Bottega Veneta to the Oscar Nominees Luncheon on Feb. 6, 2017. The "Moonlight" star's dress included black detailing on the bodice and a thin cream belt, which paired perfectly with her simple black heel selection.

Providing a cheery pop of color on the red carpet, Viola Davis selected this bright yellow gown for the 2017 Golden Globes. The Michael Kors Collection one-shouldered dress seriously sparkled and set the star apart on the red carpet.

For the Oscar Nominees Luncheon on Feb. 6, 2017, Emma Stone went for a more casual look, selecting this navy one-shouldered satin jumpsuit by Stella McCartney. We loved the addition of the pointy-toed pumps to dress up the look a bit. 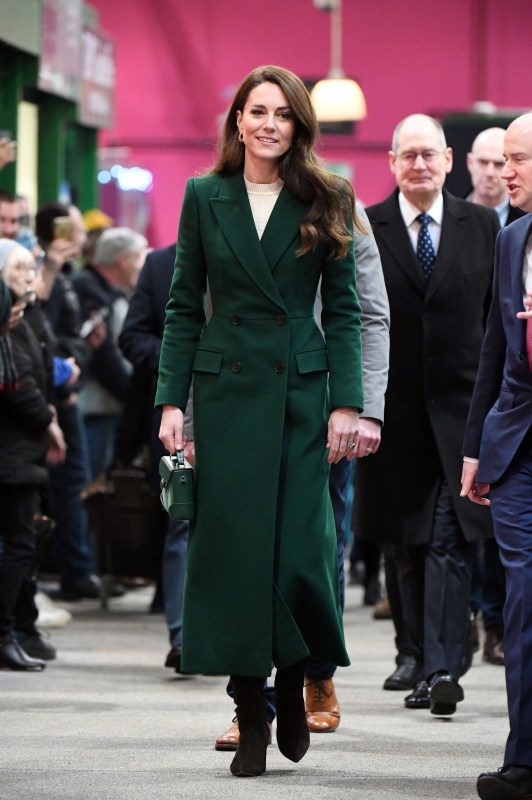