Believe it or not, the uber-glamorous Golden Globe Awards used to be a much more casual affair, but all that started to change at the turn of the millennium. In honor of the 2020 show, which airs on Jan. 5, Wonderwall.com is going back in time two decades to see what the stars wore on the still-transitioning 2000 Globes red carpet, starting with Halle Berry. She was one of the first celebs to raise the style bar with an unprecedented couture look that year (and she also won best actress for her work in the HBO movie "Introducing Dorothy Dandridge"). Halle wore a white lace Valentino gown with vibrant red floral embellishments and custom-made matching heels. Keep reading for more 2000 Golden Globes fashion!

Leave it to fashionista Sarah Jessica Parker to hop right on board the black-tie train at the 2000 Golden Globes! She wore a nude Richard Tyler gown with thin halter straps and intricate crystal beadwork all the way down to her tulle hemline. The elegant gown was perfectly suited for a winner, which is exactly what SJP was that night when she took home a best actress trophy for her work on HBO's "Sex and the City."

Gwyneth Paltrow apparently missed the formal-attire memo at the 2000 Golden Globes. She showed up in a mustard yellow cowl-necked tank top and dark brown trousers but tried to jazz up her laid-back look a little bit with a built-in sparkling bib necklace and thick gold cuff bracelets.

If it wasn't for the massive diamond bling around Angelina Jolie's neck, she would've looked like she rolled right out of bed in her lingerie at the 2000 Golden Globes. The starlet (who won a best supporting actress trophy for her work in "Girl, Interrupted" that year) wore a silky white floor-length slip dress with delicate loop buttons up the side and a matching trench coat. Even stranger, she accessorized the slinky boudoir look with her brother, James Haven, on her arm.

Reese Witherspoon, seen here with then-husband and "Cruel Intentions" co-star Ryan Phillippe — was a first-timer at the 2000 Golden Globes! She kept it classic for the momentous occasion, wearing a strapless black James Purcell gown with a white lace underskirt peeping out the bottom.

Short hair, don't care! Keri Russell complemented her cute pixie-cut curls with a plunging pink column dress at the 2000 Golden Globes. Though the Armani design was quite simple, the "Felicity" star (who won a best actress prize for her work on the TV series a year prior) still looked radiant in the revealing raspberry number.

If the Golden Globes weren't all about show-stopping fashion before, they definitely were after Hilary Swank wore this black beaded Versace creation in 2000. The typically modest dresser took a walk on the wild side in the sexy corset gown with sheer mesh fabric from the hips down. She looked even more fierce and fabulous holding the best actress award she won that night for her performance in "Boys Don't Cry."

Brown isn't the first color that comes to mind when you think of glamorous red carpet gowns, but that's the color Natalie Portman chose as a first-timer at the 2000 Golden Globes. The 18-year-old best supporting actress nominee (for her work in "Anywhere But Here") wore a chocolate silk off-the-shoulder number with a shawl and strappy heels in the same fabric.

Hugh Grant kept it simple in a classic black tuxedo and let his then-girlfriend, Elizabeth Hurley, steal the spotlight in a curve-hugging Versace number at the 2000 Golden Globes. She wore a vibrant lime green bandage dress by the designer with lavender and crystal-fringe accent lines.

Courtney Love looked like she either walked through a shredder or got mauled by cats before she hit the red carpet at the 2000 Golden Globes. The rocker wore an overly tattered and slashed-up black number by John Galliano for Christian Dior with a thigh-high slit and an excess of glittering tinsel on her skirt. The "Man on the Moon" star's look was even more distressing than it was distressed.

No, that's not Princess Ariel… it's just Portia de Rossi looking like an actual mermaid at the 2000 Golden Globes. The "Ally McBeal" star arrived in an under-the-sea sheer blue slip dress covered with iridescent purple and green beadwork. All she was missing was a majestic mermaid tail!

Julia Roberts, accompanied by then-flame Benjamin Bratt, looked as sophisticated as ever in Calvin Klein at the 2000 Golden Globes. The "Notting Hill" star (who was nominated for best actress for her work in the rom-com that year) dazzled in a deep red long-sleeved gown with a plunging neckline and a subtly flared hemline.

What the flock? Leelee Sobieski showed up to the 2000 Golden Globes with a little chirping surprise under her skirt. The "The Glass House" actress wore a unique (to say the least) sky-inspired ombre Christina Perrin dress made from blue-dyed leather. She walked the red carpet holding her train up to expose a sunset pink silk lining embroidered with a handful of sequined birds.

Jodie Foster and Russell Crowe sparked new-romance rumors when they arrived hand-in-hand at the 2000 Golden Globes. Jodie — who wore a slinky sequined top and lavender lace floor-length skirt with a blush velvet bag to match — insisted they were just friends.

Kim Cattrall channeled her inner Samantha — the provocative, man-eating New Yorker she played on "Sex and the City — in a fiery number at the 2000 Golden Globes. Her low-cut slip dress was covered in red-hot sequins and featured strategic black beadwork along the neckline to accentuate her bust.

Lara Flynn Boyle didn't seem ready to fully embrace a more formal dress code at the 2000 Golden Globes. Instead, she went to the total other end of the fashion spectrum in grungy menswear. The "Ally McBeal" star (turned groupie for the night) rocked a black pantsuit with a bedazzled Bob Seger tee cropped to show off her midriff.

Diane Lane could do no wrong in this sexy Dolce & Gabbana number! She arrived at the 2000 Golden Globes in a silver silk corset dress with boudoir-style black straps and a bustled train.

We can't decide if Winona Ryder looked more like a figure skater or a blushing bride at the 2000 Golden Globes. The "Girl, Interrupted" star walked the red carpet on the arm of her makeup artist, Kevyn Aucoin, in a sleeveless white silk gown with one whimsical ruffled shoulder and loads of sparkling crystal beadwork.

Jenny McCarthy's midriff-baring halter top and floral skirt would never fly at the Golden Globes nowadays, but she somehow pulled off the genie-in-a-bottle look back in 2000 when she paired a plunging fuchsia crop top with a nude and crystal-embellished bottom.

Debra Messing brought Old Hollywood glamour to the 2000 Golden Globes in a navy blue gown fit for Audrey Hepburn herself. The "Will & Grace" starlet (who was nominated for best actress for her work on the comedy series that year) dazzled in a sleeveless boatneck number with a keyhole cut-out and retro white bow-tie belt.

Lucy Liu's strapless dress at the 2000 Golden Globes might have been black and white, but it was anything but basic. The curve-hugging silhouette featured a bold floral cut-out print likely to induce vertigo if looked at long enough.

Julianna Margulies was the belle of the ball in Oscar de la Renta at the 2000 Golden Globes! The "ER" star (who was nominated for best actress for her work on the medical drama series that year) looked like a real-life princess in a strapless navy blue ballgown with intricate crystal embroidery and a matching tulle shawl. We can only assume that she arrived via horse-drawn carriage.

Is it too soon to make Felicity Huffman prison jokes? Well, we doubt she had any idea that she'd be trading in her glamorous garb at the 2000 Golden Globes for an inmate's uniform nearly 20 years later (a judge sentenced her to 14 days behind bars for her involvement in a college admissions cheating scandal). Pre-lockup, she walked the red carpet in a structured strapless fuchsia gown with a color-blocked black train.

Mariska Hargitay plays tough-as-nails detective Olivia Benson on "Law & Order: SVU," but she displayed a much softer side at the 2000 Golden Globes. She looked fierce and feminine wearing a sheer mermaid-style slip dress with metallic black square patchwork details throughout. 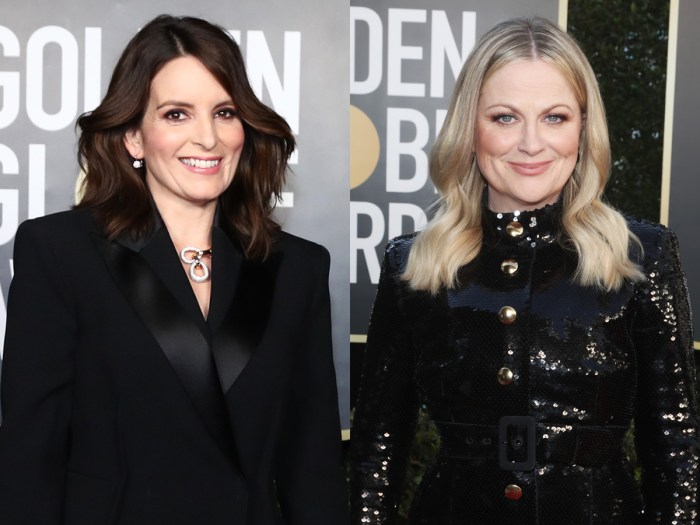