More often than not, Kim Kardashian West publicly defends her husband when he makes controversial statements or unexpected choices — even when his opinions differ greatly from her own, as was the case with the pro-Donald Trump sentiments he expressed in April. When he told TMZ Live he thought 400 years of slavery "sounds like a choice," however, she stayed out of the backlash that took place online, telling ET she fought with him and cried. Kanye later rapped about the ordeal on the new track, "Wouldn't Leave." Speaking to the New York Times in a new interview published this week, Yeezy admitted he worried Kim would divorce him over the gaffe. "There was a moment where I felt like after TMZ, maybe a week after that, I felt like the energy levels were low, and I called different family members and was asking, you know, 'Was Kim thinking about leaving me after TMZ?'" he recalled, adding, "So that was a real conversation." As for the statement itself, Kanye told the Times his quote was taken out of context or miscommunicated. "I said the idea of sitting in something for 400 years sounds — sounds — like a choice to me, I never said it's a choice. I never said slavery itself — like being shackled in chains — was a choice. That's why I went from slave to 400 years to mental prison to this and that. If you look at the clip you see the way my mind works," Kanye said, "I think an extreme thing; I adjust it, I adjust it, I adjust it. That's the way I get to it, but I have to push to, you know, the furthest concept possible."

Oops. Busy Philipps had an unwanted birthday surprise when her attempt to go pink went awry. "Guys. I had a hair dye mishap on my birthday," she said on Instagram Stories (via E! News) on Monday, June 25, sharing an image of her newly colored locks. "I used a new dye and it's like bright fuchsia. Oh no!" She wrote "nothing is permanent" on top of the clip and tried to be optimistic. "But it will fade," she said. "You know, whatever. Maybe this is who I am now. 39. This is me." Later, Busy headed out for some birthday fun with her pals and apparently got more comfortable with the new look. "The pink is growing on me," she wrote. Finally, sharing a photo of her hair reflecting its new pink sheen in the sun, she posted, "Look at what the light did now. Thank you for all your kind and sweet birthday wishes. I'm happy I'm here."

It's been a long time coming, but the Academy of Motion Picture Arts and Sciences appears to be getting serious about diversity. This year, a record number of potential new members were invited to join the organization, which has faced serious backlash for its largely white male membership and the resulting number of white males who tend to be nominated for Oscars. After last year's 774 invitations, the Academy invited 928 invites in its canvassing for new members this year, according to Deadline. Invitees include Tiffany Haddish, Kendrick Lamar, Alison Brie, Quvenzhané Wallis, Mindy Kaling, Amy Schumer, Sarah Silverman, George Lopez, Rashida Jones, Hannibal Buress, Dave Chappelle, Isla Fisher, Damon Wayans and Harry Shearer. Forty-nine percent of the record number of new invitees are women, Deadline reports, while 38 percent are people of color.

Lindsay Lohan: 'My past has to stay in the past'

In a New York Times piece titled, "You Can't Hurt Lindsay Lohan Now," the child star-turned-misunderstood-tabloid-queen-turned –Greek-nightclub maven makes it very clear that she's set up her life to be different from the way it was way back when. "I'm a normal, nice person. A good person. I don't have any bad intentions. And my past has to stay in the past," says Lindsay, who turns 32 on July 2. "Like, people have to just let go of it and stop bringing it up because it's not — it's gone. It's dead. And that's the most important thing to me." The Times notes Lindsay's briefly held, unidentifiably random accent also seems to be a thing of the past as she explains why she feels safe in her adopted home of Dubai — a place where she's no longer tormented by paparazzi — and how she came to realize she can live her best life if she keeps a careful eye on who and what she allows near her. In Dubai, she says, "I don't have to turn on the news and see about the Kardashians. I don't have to see anything anymore. I choose what I want to see and how I want to live." As for the family drama that trailed her for years? "Look, I'm not in control of my family. I'm only in control of myself. We're all friends. My mom and dad are friends, everyone's good," Lindsay says. "If anyone in my life for one second, I feel unsafe with, they're out. Very simple. This is it. I'm not going to complicate things. Because I'm a caretaker, I always want to give to people." Lindsay also addresses the experience of being filmed while her then-fiance, Egor Tarabasov, assaulted her. "It happened, here in Mykonos, on the beach," she says, speaking from the grounds of her new Lohan Beach House property. "And that was the moment where I switched and I was like, 'I'm going to take control of my life completely, and fire everyone and just rehire them when I'm ready.' And that's why I'm here today, because it was on that beach where I got hit. I said, 'You know what? If there's anything I can do, I'm going to get that beach. It's going to be my beach.'" Lindsay adds: "There was this moment where it was like, 'I don't really need to be worried about a guy hurting me, I don't need to live in fear.' Because when women show fear, I feel like that makes us powerless." As the feature wraps up, the reporter describes Lindsay, once the subject of "upskirt photos" and Donald Trump and Howard Stern's musings about her sexual prowess (she was 18 at the time, the Times points out), dives into the ocean, looking self assured — and followed by all of zero cameras.

Despite both the defense and prosecution's agreement that Meek Mill should get a new trial in his 10-year-old drug and weapon case, he was denied his request this week, according to the New York Post. The decision came courtesy of Judge Genece Brinkley who has been accused of demanding Meek record a shout-out to her and who put him behind bars for up to four years for a minor probation violation. The new trial request was made after it was revealed the pivotal testimony in the case came from a cop who is known to lack credibility. The cases of least three other defendants against whom he has testified have been given new trials. Still the judge ruled Meek "had not met his burden of proof in questioning the officer's credibility, according to the Post. "We are not at all surprised by Judge Brinkley's decision today," said Meek's lawyer. "Despite the agreement of the District Attorney's office on the need for a new trial, and the granting of new trials to other identically situated defendants, Judge Brinkley made clear during the hearing on June 18th that she had already decided the matter. We continue to believe that this miscarriage of justice will be corrected upon further review, and that the public's confidence in the impartiality of the judicial system in Pennsylvania will be restored."

Jimmy Fallon: Shouldn't Trump have better things to do than tweet about me?

Jimmy Fallon is trying to understand how the leader of the free world has time to mock him on Twitter — a musing he aired on "The Tonight Show" on Monday, June 25. The mocking in question took place after Jimmy Fallon said he regretted having joked about Donald Trump's infamous orange coif on his show because he now worries it "humanized" him. Jimmy's concern, of course, made its way to the White House, sparking Donald to tweet-rant about the Emmy winner's "whimpering," how he'd "seriously" messed up his hair and how he should "be a man." Jimmy's response? "As you may have heard, last night, the President of the United States went after me on Twitter. So, Melania, if you're watching, I don't think your anti-bullying campaign is working," he quipped at the opening of the show, according to E! News. "When I saw that Trump insulted me on Twitter, I was gonna tweet back immediately, but I thought, 'I have more important things to do.' Then I thought, 'Wait! Shouldn't he have more important things to do?' He's the president! What are you doing? Why are you tweeting at me?" He went on to share Donald's tweets about him with the audience. "That's real. It's crazy," Jimmy said. "The president went after me on Twitter. It's pretty much the only thing I have in common with NFL players. In response, I made a donation in Trump's name to the Refugee and Immigrant Center for Education and Legal Services, or RAICES. When Trump heard, he was like, 'I love RAICES — they're my favorite peanut butter cup.' There's no wrong way to eat a RAICES." Sigh. Cue @therealdonald's tweet-back in 3 … 2 … 1 …

He may be in the minority, but Jerry Seinfeld doesn't think Roseanne Barr's comments racially offensive comments were grounds for axing her. "I didn't see why it was necessary to fire her. Why would you murder someone who's committing suicide?" the comic recently told ET. He added that he "never saw someone ruin their entire career with one button push" before suggesting a plan B to save Roseanne's show. "I think they should get another Roseanne," he offered. "They brought Dan Conner back, he was dead and they brought him back. So, why can't we get another Roseanne? There's other funny women that could do that part. You need to get the comic in there. I hate to see a comic lose a job." Jerry's comments come on the heels of Judd Apatow's suggestion that something is wrong with Roseanne's "mental state" and that she may have been crying out for help when she unleashed multiple racist tweets.

The father of Francesca Eastwood's baby-to-be files for divorce

Are there wedding bells in Francesca Eastwood's future? The 24-year-old actress announced back in May that she's expecting her first child with fellow actor, Alexander Wraith. It turns out Alexander hasn't quite wrapped up his last relationship, though. According to The Blast, he just filed for divorce from his wife, Lili Gaildraud, on Monday, June 25. Alexander reportedly listed 2015 as the date of his separation from Lili, whom he married in 2010 and with whom he shares a 7-year-old son. Asked if he and Francesca planned to tie the knot, he told The Blast, "when the time is right, people will know."

Neal E. Boyd was found unresponsive by his mother

New details have emerged about the death of Neal E. Boyd, the 2008 "America's Got Talent" winner who passed away June 10. TMZ reports the opera singer's mother, Esther Rogers Boyd, found him unresponsive and wearing a sleep apnea mask before calling 911. Because no illegal drugs were found in Neal's room and he was known to have had a heart condition, no autopsy was done, although the coroner later said Neal had suffered from heart failure, kidney failure and liver problems. He was buried at a private funeral earlier this month. 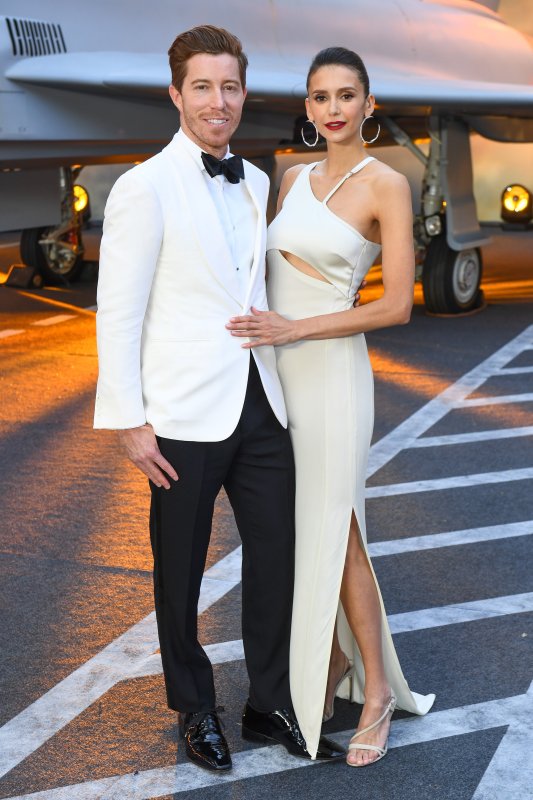