Pamela Anderson has said "I do" for the fifth time. On Jan. 20, the former "Baywatch" star married movie mogul Jon Peters, who produced the 1976 and 2018 versions of "A Star is Born" and dozens of other notable movies like "Caddyshack" and "Rain Man." The pair previously dated 30 years ago. Jon confirmed the surprise nuptials, telling The Hollywood Reporter, "There are beautiful girls everywhere. I could have my pick, but — for 35 years — I've only wanted Pamela. She makes me wild — in a good way. She inspires me. I protect her and treat her the way she deserves to be treated." Pam told the outlet, "We love each other without conditions."

This is what we've all been waiting for! On Jan. 19, exes Brad Pitt and Jennifer Aniston were actually photographed together (YES! YES! YES!). The semi-public run-in happened backstage at the Screen Actors Guild Awards, where both took home new hardware. When Brad won for his performance in "Once Upon a time in Hollywood," cameras cut to Jen, who smiled with a fixed gaze. Brad was then backstage when Jen won her award for her work on "The Morning Show." "Wow!" he exclaimed, smiling from ear-to-ear while watching her deliver her speech on a monitor. "That's so sweet," Jen told "Extra" after learning about his reaction. Amidst it all, the two — who were famously married from 2000 to 2005 (and split this very month 15 years ago) — briefly crossed paths backstage, which is when this photo was taken. The reunion has only served to fuel speculation that the exes could, pardon the pun, once again end up more than friends.

Ozzy Osbourne was diagnosed with Parkinson's disease — a neurodegenerative disorder and has no cure — nearly a year ago, he revealed on Jan. 21 on "Good Morning America." Ozzy's wife, Sharon Osbourne, said the rocker has the Parkin 2 gene. Ozzy is planning to undergo immune therapy in Switzerland to help. "I feel better now that I've owned up to the fact that I have a case of Parkinson's," he said. "I just hope they hang on and they're there for me because I need them," he said of his fans. "They're my air."

Taylor Swift has revealed that her mom, Andrea, has a brain tumor. While chatting with Variety to promote her new Netflix documentary, "Miss Americana," the pop star said doctors diagnosed her mom with a brain tumor while she was undergoing treatment for cancer for the second time. "She was going through chemo, and that's a hard enough thing for a person to go through," Taylor said. "While she was going through treatment, they found a brain tumor. And the symptoms of what a person goes through when they have a brain tumor is nothing like what we've ever been through with her cancer before. So it's just been a really hard time for us as a family." Taylor said her mother's health is the reason she's not touring extensively this year to support her "Lover" album. "I mean, we don't know what is going to happen," she shared. "We don't know what treatment we're going to choose. It just was the decision to make at the time, for right now, for what's going on."

Jessica Simpson is opening up like never before, revealing in a new memoir that she was addicted to alcohol and pills and was sexually abused by a family friend as a child. "I was killing myself with all the drinking and pills," she writes in "Open Book," according to excerpts published by People magazine. She reveals that her doctor told her that her life was in danger because of her lifestyle. After a Halloween party in 2017, she vowed to get sober and hasn't had a drink since. The pop star-turned-business mogul, who said she goes to therapy twice weekly, called sobriety "a continual gift." "Honesty is hard but it's the most rewarding thing we have," she wrote. "And getting to the other side of fear is beautiful."

Aerosmith's longtime drummer sued the band for allegedly freezing him out of several upcoming big events, including the Jan. 26 Grammy Awards and the Jan. 24 MusiCares Person of the Year honors. However, on Jan. 22, a judge ruled against him. Joey Kramer had said the band forced him to essentially audition for the job he'd held for five decades after he took a leave of absence. "This is not about money. I am being deprived of the opportunity to be recognized along with my peers for our collective, lifetime contributions to the music industry," he said in statement. The band said Joey's tryout lacked the energy it needed. "Joey Kramer is our brother; his wellbeing is of paramount importance to us. However he has not been emotionally and physically able to perform with the band, by his own admission, for the last six months. We have missed him and have encouraged him to rejoin us to play many times but apparently he has not felt ready to do so," the band said in a statement, adding that letting him perform would be doing everyone a "disservice." "Given his decisions he is unfortunately unable to perform but of course we have invited him to be with us for both the Grammys and our MusiCares honor," the band said.

Run it back! A little more than a month after news broke that they'd called it quits, Channing Tatum and Jessie J are back on. The duo "took a few weeks apart but ultimately decided they really care about each other," a source told E! News. When the split news surfaced in mid-December, sources said nothing dramatic had happened and that the two remained friendly. They are now "fully back together" and "seem very happy to be spending time together again," E!'s source said. "Jessie has been staying at Channing's house this past week. They are super-giddy around each other."

If Lori Loughlin doesn't change her plea to guilty in her college admissions scandal case, her daughters will be called to testify, according to a report published on Jan. 21. "Lori has been told by the legal team that the United States Attorney's Office will use her daughters as star witnesses in hopes of securing a conviction," a source told Us Weekly. When the actress asked if there was anything she could do to keep her daughters — Bella Rose Giannulli and Olivia Jade Giannulli — off the witness stand, "she was told there wasn't unless there was a change from not guilty to guilty," the source explained. "Accepting a plea bargain would be the only solution." The "Full House" alum and husband Mossimo Giannulli have both pleaded not guilty to charges of fraud, money laundering and bribery for allegedly paying to get their daughters admitted to the University of Southern California.

Taylor Swift developed an eating disorder years ago after seeing unflattering paparazzi pictures of herself, she reveals in her new Netflix documentary, "Miss Americana," which premiered at the Sundance Film Festival on Jan. 23. "It's only happened a few times, and I'm not in any way proud of it. A picture of me where I feel like I looked like my tummy was too big, or … someone said that I looked pregnant … and that'll just trigger me to just starve a little bit — just stop eating," she said. Her relationship with food, she explained, was "unhealthy." In speaking to Variety about the documentary, she noted that her "relationship with food was exactly the same psychology that I applied to everything else in my life: If I was given a pat on the head, I registered that as good. If I was given a punishment, I registered that as bad."

Jesse Tyler Ferguson and husband Justin Mikita are going to be first-time parents. The "Modern Family" star broke the news on Jan. 22 while appearing on "The Late Late Show with James Corden." "This is something I haven't even mentioned to anyone," he said. "I'm actually expecting a baby in July with my husband. But shh, don't tell anyone. Let's keep it between us." The actor didn't specify the gender of the baby, only saying they're expecting "a human." "I'm very excited," he said. "I'm 44 now, I'm like, let's get this show going, tick tock." 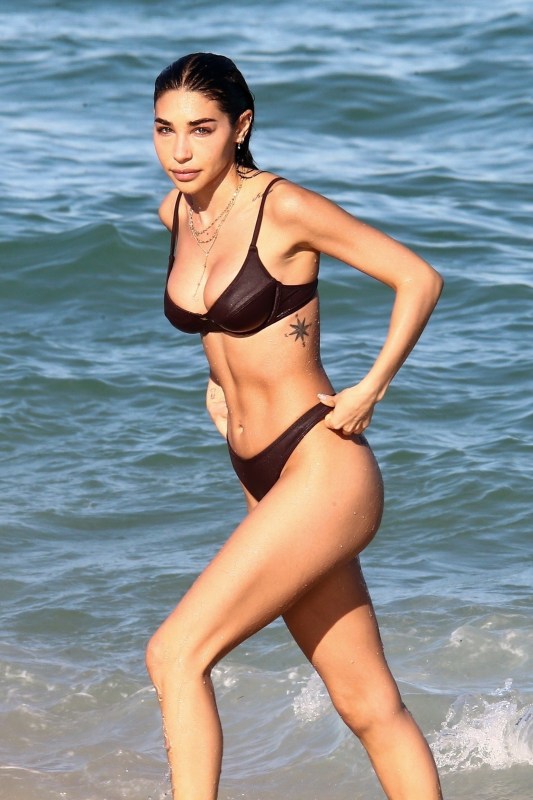