Sibling love! In honor of National Sibling Day on April 10, Wonderwall.com is taking a look at the brothers and sisters who choose to work together. First up, a band that's kept it all in the family. The Jonas Brothers — comprised of Nick Jonas, Joe Jonas and Kevin Jonas — formed in 2005. The siblings' fame soared after they starred on the Disney Channel in the "Camp Rock" TV movies and their own show, "Jonas L.A." They also squeezed in four studio albums and nine concert tours before finally calling it a day in 2013. Fortunately for fans, the brothers teamed up again in 2019, releasing their first single in six years, "Sucker," in March. Keep reading for more examples of stars keeping it in the family…

Like most little sisters, Elle Fanning idolized big sis Dakota Fanning… so much so that she followed her into the movies! Elle's first role happened to be playing a young Dakota in "I Am Sam," which launched the younger Fanning's successful acting career. She played a younger Dakota once more in Steven Spielberg's miniseries "Taken." Since then, the two have united once more to lend their voices to 2005's "My Neighbor Totoro."

Dave Franco and James Franco teamed up for the first time in 2017's "The Disaster Artist." The brothers, who both paved their own way in their careers, took on the roles of buddies Tommy Wiseau and Greg Sestero in the flick about the making of Tommy's bizarre cult-classic film "The Room." The decision to work together wasn't easy for Dave, but he eventually came around. He told Business Insider: "When I first started acting I did make a conscious choice to distance myself from him work-wise just because I wanted to paint my own path, not be referred to as James Franco's little brother for the rest of my life. But after a while it just got to the point where I was like, 'He's my brother and I love him and I respect him,' and with 'The Disaster Artist,' the dynamic between these characters just felt right."

Technically, Gigi Hadid and Bella Hadid started working together back in 2012 when they both appeared alongside mom Yolanda Hadid on "The Real Housewives of Beverly Hills." The show chronicled the start of Gigi's modeling career, and soon both she and younger sis Bella were taking the fashion world by storm. The siblings have walked dozens of runways together, from high-end designers' catwalks to the Victoria's Secret Fashion Show.

Professional dancer Julianne Hough worked her way to the top of the ladder on "Dancing With the Stars," stepping off the dance floor to reign as a fourth judge for five seasons. Her dancer brother Derek Hough also made a name for himself on the ABC dance competition series (and won the Mirror Ball Trophy a record six times in the process). Julianne called it quits after Season 24, choosing to focus on acting, while Derek left after Season 23 and moved on to another dance show — NBC's "World of Dance."

The 1997 film "Good Will Hunting" rocketed Ben Affleck and BFF Matt Damon to stardom. But Ben's little bro, Casey Affleck, also had a small role in the movie. The same year, he appeared in the romantic comedy "Chasing Amy," which featured Ben in the leading male role. Their work relationship didn't end there: 10 years later, Ben stepped behind the camera to direct Casey in the 2007 mystery "Gone Baby Gone."

Maggie Gyllenhaal and Jake Gyllenhaal were both born to a screenwriter mom and director dad, so it was only a matter of time before they got involved in the family business. The brother and sister first worked together in dad's flick "A Dangerous Woman" as kids. Years later, Maggie had a role in Jake's breakout flick, "Donnie Darko."

The Kardashian-Jenner juggernaut is now a multimillion-dollar empire, thanks to the family landing their own reality show, "Keeping Up With the Kardashians," back in 2007. More than a decade and 16 seasons later, the show is still going strong as all five sisters — Kim Kardashian West, Kourtney Kardashian, Khloe Kardashian, Kendall Jenner and Kylie Jenner — enjoy success on and off the small screen. And though brother Rob Kardashian hasn't been featured on the show often in the last few years, in the beginning, he got in on the family fun too.

Joel Madden and twin brother Benji Madden have been collaborating for years on the rock music scene. Joel is the lead vocalist in their band "Good Charlotte" while Benji is a vocalist and rhythm guitarist. The group, which formed in 1996, went on a four-year hiatus in 2011. During that time, the brothers started another band, "The Madden Brothers," which they juggle alongside "Good Charlotte." They also have very famous wives: Joel is married to Nicole Richie while Benji is married to Cameron Diaz.

Mary-Kate Olsen and Ashley Olsen have been working together since they were infants! The twins grew up in front of our eyes while playing Michelle Tanner on the hit '90s sitcom "Full House." They continued to work together throughout the '90s on a series of shows and films such as "It Takes Two." And these days, the power siblings are mavens of the fashion world, with a slew of clothing lines including their couture fashion label The Row.

Like the Olsens, Cole Sprouse and Dylan Sprouse have been working together since they were babies. They started out with a gig on "Grace Under Fire" as infants and later moved to the big screen, playing the little boy in "Big Daddy." Then the Disney Channel came calling and the boys starred in the beloved series "The Suite Life of Zack and Cody" and its spinoff, "The Suite Life On Deck." Both opted to take a break from acting and head to college, attending New York University. Not long after, Cole returned to Hollywood — he's currently starring on TV's "Riverdale" — while Dylan has focused more on shorts and small films.

The Wayans family is a Hollywood dynasty, but brothers Shawn Wayans and Marlon Wayans seem to really make magic when they team up. The duo have starred in many movies together including "Little Man," "Scary Movie" and "Scary Movie 2" and "White Chicks."

Maddie Ziegler and younger sister Mackenzie Ziegler kept the nation entertained for six seasons on the Lifetime reality show "Dance Moms." Though they left the series behind in 2016, both sisters have carved out separate careers for themselves. Maddie continues to work in the dance world — she served as a judge on "So You Think You Can Dance?" and appeared in music videos for Sia. And little Mackenzie has tried her hand at the music world, building a big following on Instagram, Musical.ly and YouTube and appearing on "Dancing With the Stars: Juniors."

Though they're both respected actresses in their own right, many people don't realize that Emily Deschanel and Zooey Deschanel are also sisters! The two united onscreen when Zooey stopped by an episode of Emily's hit show "Bones." (Spot her on the Season 5 episode "The Goop on the Girl.")

Mark Wahlberg is not just a pretty face — he's also got business savvy. Along with brothers Donnie Wahlberg and Paul Wahlberg, the actor, one of nine children, owns a stake (or should we say steak) in a growing chain of Wahlburgers restaurants. The eatery is also the subject of their popular A&E reality show aptly titled "Wahlburgers," which wrapped its ninth season in 2018.

With a supermodel for a mom, it was only natural for Presley Gerber and Kaia Gerber to hit the catwalk. The brother-sister duo have since worked together as they navigate the modeling world, posing for Calvin Klein together and appearing in editorials side by side. We have no doubt that mom Cindy Crawford and dad Rande Gerber are very proud!

Ray J and Brandy have worked together multiple times and in multiple facets! The siblings' first time uniting on camera happened back on Brandy's successful show "Moesha," where Ray J started as a guest star before joining the cast and staying for three seasons. They also starred on "One on One" before moving on to reality TV. The duo starred on VH1's "Brandy and Ray J: A Family Business" and also both competed on "My Kitchen Rules." And since both are musicians, they've also recorded music together in the past.

Hilary Duff made a name for herself on Disney's "Lizzie McGuire," but big sister Haylie Duff also popped up on the show from time to time (as Kate Sanders' cousin Amy). In 2005, the sisters worked together on a remake of the 1981 song "Our Lips Are Sealed" by female rock band The Go-Go's. The siblings then joined forces again later that year on the film "Material Girls," which was released in 2006 and also starred Anjelica Huston.

It's no wonder Willow Smith and Jaden Smith joined the family business — their parents are Will Smith and Jada Pinkett Smith, after all! But the duo also love to work together. Jaden featured Willow on his 2012 track "Find You Somewhere." And he also recruited his little sis for a role on his Netflix animated series "Neo Yokio."

Aly Michalka and AJ Michalka rose to fame as teens in their self-titled pop group Aly and AJ. Aside from working together on music, they also took their sister act to the small screen. They starred alongside one another on the Disney Channel's 2006 TV movie "Cow Belles."

Identical twins Tia Mowry and Tamera Mowry-Housley rose to fame on the WB sitcom "Sister, Sister," which aired for six seasons from 1994 to 1999. Earlier in the '90s, the duo were part of R&B girl group "Voices," though only stuck around for the first single. In 2011, they teamed up once more to star on the reality show "Tia & Tamera," which ran for three seasons.

Val Chmerkovskiy and brother Maksim Chmerkovskiy worked together on "Dancing With the Stars" for some time, but that wasn't enough for these hunky sibs. The Ukraine-born brothers also headed out for an autobiographical dance tour, "Maks & Val Live on Tour: Our Way," back in 2016. 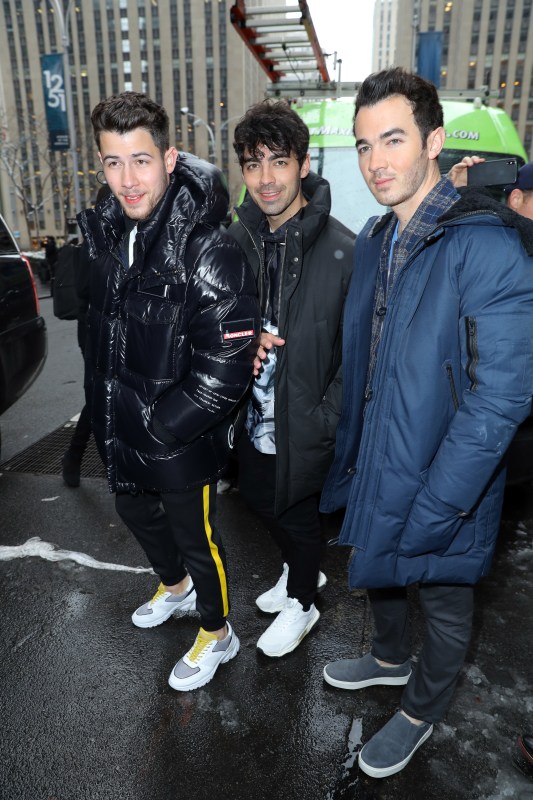 Up Next A Family Affair