Why Megyn Kelly's Sunday-night show might be scaled back

On March 6, NBC announced that "Today" star Megyn Kelly's primetime news magazine show, "Sunday Night with Megyn Kelly" — which garnered less-than-impressive ratings when it debuted last summer — will now air just "periodically" dependent "on Kelly's schedule with her weekday-morning program, 'Megyn Kelly Today.'" But a new report from Page Six claims that's simply the network's way of trying to save face and, it writes, "scale back the poorly received show without the awkwardness of canceling it." NBC's reasoning seems sketchy, the report points out, since Megyn certainly knows her morning-show schedule — it airs like clockwork during the third hour of "Today" every Monday through Friday. Her Sunday-night show,of course, made headlines for months not only for its shrinking ratings (it was regularly beat by reruns of "60 Minutes" and "America's Funniest Home Videos") but because it was marred by controversy (remember her Father's Day interview with "InfoWars" personality Alex Jones, a noted Sandy Hook school shooting denier?). Page Six also reports that sources have been saying since January that NBC has been unsure of what to do with the poorly performing news magazine. In the meantime, Megyn — whose "Today" show slot also has a history of being ratings-challenged — returns to primetime on Friday, March 9, with an NBC News special titled "Confronting Putin." The hour-long show will feature Megyn interviewing Russia's president for the second time since June 2017.

"American Idol" contestants are hooking up behind the scenes

The debut of the rebooted "American Idol" starring judges Lionel Richie, Katy Perry and Luke Bryan is just days away. But as America prepares to get to know a new crop of contestants, those singing hopefuls have wasted no time getting to know each other. Intimately. According to a March 7 report from TMZ, several contestants, who've been staying at a Los Angeles-area hotel together, are hooking up. "Production sources tell us this season is different from all the others because contestants are not only hooking up [but] at least two of them and possibly four are in actual relationships," TMZ writes, adding, "There have been a number of casual hookups as well." Producers, meanwhile, are aware and seem to be fine with it.

One day after the dramatic finale of "The Bachelor" aired, revealing that star Arie Luyendyk Jr. had proposed to Becca Kufrin only to dump her weeks later — while cameras cruelly rolled — the show returned with an equally dramatic "After the Final Rose" special on March 6. This time, cameras showed Arie winning back runner-up Lauren Burnham and then proposing to her on live television. Moments later, host Chris Harrison revealed that jilted Becca would be the star of the next installment of "The Bachelorette." (Got all that?) What we want to know is, Who got the better ring? When Arie popped the question to Lauren, the Neil Lane sparkler he slipped on her finger looked an awful lot like the Neil Lane engagement ring he'd given to Becca back in Peru. But it turns out they are a bit different. People magazine has close-up photos of both Becca and Lauren's rings and reveals that Becca's featured a 3-carat oval diamond surrounded by a ring of smaller diamonds and a diamond-studded band. Lauren's bling is bigger: Her ring has 3.5 carats of diamonds including a cushion-cut center stone surrounded by a halo of diamonds, two baguettes and even more small stones (there are 170 in all) on the band.

Is this the start of a beautiful new friendship? Kim Kardashian West joined Madonna at Barneys New York in Beverly Hills on March 6 where the women supported each other as they discussed their respective beauty lines. Madonna was there to hype her luxury skincare line, MDNA, while Kim was supporting her own brand, KKW Beauty. But the reality star and the Material Girl also posed for selfies, natch, including this one that Kim posted on her Instagram story. For her part, Madge — who, like Kim, donned curve-hugging clothing and also changed into a black bustier for a panel discussion — shared a few pics of herself and her new reality star pal on Instagram, including one shot of the two trying out the mouse Snapchat filter that she captioned, "And we make cute!"

Like Celine Dion, Elton John, Jennifer Lopez and Britney Spears before her, Gwen Stefani is working on a deal to secure a Las Vegas residency, E! News reports. Gwen is "very close," a source tells E!, to finalizing a deal that will see her headlining a series of shows at the Zappos Theater at Planet Hollywood. "Her visit to Las Vegas this weekend was one of the final pieces of the puzzle," said the source of Gwen's March 3 trip to Sin City, where she took in J.Lo's residency show, which is also at Planet Hollywood. "Things are looking very good." Gwen is said to be pursuing a residency — which E! reports might also feature her No Doubt bandmates — because she wants to be around more for her three children. "This is about spending more time with her kids. She doesn't want to go back out on a big tour again and be away from her kids for six months at a time," the source explained, adding, "There's flexibility that comes with doing a residency. She'll be able to come in and out of Las Vegas for a couple weeks at a time throughout the year and she'll never be too far from home." Meanwhile, hours before she watched J.Lo on stage, Gwen was photographed shaking hands with ex-husband Gavin Rossdale's 28-year-old German girlfriend, Sophia Thomalla, on the sidelines at son Kingston Rossdale's soccer game in Los Angeles. DailyMail.com, which has the pics, speculated that from the looks of things, the two women were meeting for the first time.

Michael Shannon's movie "The Shape of Water" won a slew of Oscars (including best picture!) on March 4. But the two-time best supporting actor nominee skipped the glamorous ceremony inside Hollywood's Dolby Theatre and instead watched the telecast — on mute, no less — at a bar in Chicago. Bruce Ellis, who owns the Old Town Ale House, revealed the news when he posted a snapshot of Michael, clad in a puffy winter jacket and having a drink, on Twitter on March 5. "Michael Shannon watching the film he starred in, 'Shape of Water,' win best picture while sitting in the Old Town Ale House. No sound on the TV, just sub-titles. Of course the juke box was rocking, and the beer flowing. Where else would you want to spend Oscar night?" he captioned the pic. According to DailyMail.com, Michael is in Chicago to direct a production of Brett Neveu's "Traitor" at A Red Orchid Theatre, which is a short walk from the bar.

Less than four months after he was unceremoniously fired by NBC amid a sexual misconduct scandal, disgraced "Today" show newsman Matt Lauer remains plagued by rumors that his marriage to Annette Roque is all but over. And now, DailyMail.com reports, the couple have dramatically slashed the price of one of their Hamptons estates. According to Zillow, the palatial Sag Harbor, New York, property is now listed for $12.75 million after previously being advertised for $14.9 million — a reduction of $2.15 million. (When it first went on the market, it was listed for a whopping $18 million!) The gorgeous 8,000-square-foot colonial-style property has six bedrooms, six bathrooms and two half baths as well as a 70-foot heated pool, pool house and tennis court that sits on 25 acres of land. Reports in recent months have indicated that Matt has moved out of the couple's main Hamptons home — a 19,000-square-foot mansion named Strongheart Manor — that he and Annette, who lives there with their kids, purchased from Richard Gere for $36.5 million in 2016. That place features 12 bedrooms, 12 bathrooms and two guesthouses on six acres of waterfront property.

Duchess Kate recycles dress for appearance just weeks ahead of baby No. 3's due date

Duchess Kate is just weeks away from delivering her third child, who's due in April, yet she's relentlessly continuing to make public appearances on behalf of the royal family and causes she cares about. But she's also being practical about it. On March 7, the erstwhile Kate Middleton recycled a gorgeous blue Seraphine dress for an appearance in London, where she opened the new Place2Be headquarters. She previously wore the lacy frock in early February to a lunch with Norway's royal family at their palace in Oslo during her and Prince William's official tour of Sweden and Norway.

"It" boy Daniel Kaluuya looked good on Oscars night on March 4 — he was nominated for his work in the breakout film "Get Out" — in a bold golden Brunello Cucinelli tux jacket. But it turns out the British star also got a little boost in the handsome department care of Rihanna (via Celebitchy). The pop star's Fenty Beauty brand tweeted out a few images of the "Black Panther" actor revealing that his makeup artist, Amber Amos, used Fenty Beauty's foundation on him ahead of the ceremony (it was its #PROFILTR Foundation in shades #480 and #490, in case you were wondering). The stuff was so good, RiRi's company pointed out, that none of it transferred onto "Get Out" filmmaker Jordan Peele's white tuxedo jacket when Daniel went "in for a full hug" when Jordan won the best original screenplay Oscar.

Bindi Irwin is now a Barbie doll. The celebrated Australian animal conservationist (and Season 21 "Dancing With the Stars" winner and fan favorite) is among 17 historical and modern-day role models being honored by the brand's Shero program as the world celebrates International Women's Day on March 8. Two days earlier, Mattel revealed the dolls, including Bindi's (third from left), which comes complete with her Australia Zoo khakis and a koala friend. Other famous and inspirational celebrity role models among the international lineup who are are being immortalized in Barbie form this year include "Wonder Woman" director Patty Jenkins (fourth from right) and Olympic gold-winning snowboarder Chloe Kim (fifth from left). 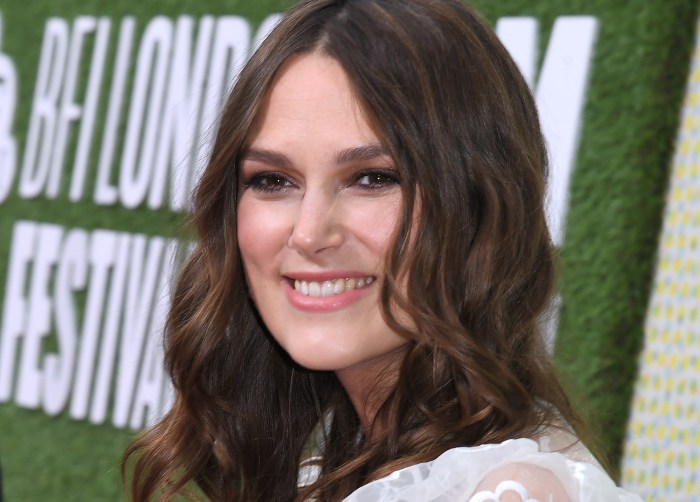