The royal family is growing again! On Sept. 4, Kensington Palace announced that Prince William and Duchess Kate are expecting their third child. "Their royal Highnesses The Duke and Duchess of Cambridge are very pleased to announce that The Duchess of Cambridge is expecting their third child," Kensington Palace said in a statement posted to Twitter. "The Queen and members of both families are delighted with the news." The statement also said that Kate is again suffering from hyperemesis gravidarum, better known as acute morning sickness (she's suffered from this during her first two pregnancies, as well). While attending the National Mental Health and Policing conference in Oxford, England, on Sept. 5, Will opened up about the pregnancy. "It's very good news," he said. "There's not much sleep going on at the moment."

For years (four, actually!) Katie Holmes and Jamie Foxx denied that they were secretly dating. There's no more denying it! On Sept. 6, the Daily Mail published photos of the undercover lovers walking hand-in-hand on the beach in Malibu, Calif. The newspaper also published a video of the couple playing in the ocean and along the beach. The duo looked happy, and maybe relieved, to finally stop hiding their romance. This all leads to the question of why it took so long for them to go public? One report claims it's because of a clause in Katie's divorce settlement with Tom Cruise that allegedly prevented her from dating anyone publicly for five years following their divorce. That report was never confirmed, but in late August it marked five years since Katie and Tom were officially divorced. Just a couple weeks later, Katie and Jamie are out in public. Coincidence?

RELATED: A timeline of Katie and Jamie's discreet romance

It was confirmed in late January that Evan Rachel Wood had gotten engaged to Zach Villa. Then on Sept. 7, it was reported that the engagement had been called off! The Blast reported that the actress and Zach, her bandmate in Rebel and a Basketcase, broke up over a month ago. Evan's rep announced the engagement in January after both Evan and Zach both were seen wearing silver bands on their left-hand ring fingers while attending the Screen Actors Guild Awards in Los Angeles. The status of Rebel and a Basketcase isn't known.

The Prince and I

For the first time, Meghan Markle is speaking about dating the world's most eligible bachelor in Prince Harry. The duo began dating in the summer of 2016. While Kensington Palace has officially confirmed the romance, neither Harry nor Meghan has commented publicly until now. "I can tell you that at the end of the day I think it's really simple. We're two people who are really happy and in love," she told Vanity Fair in a cover story. "We were very quietly dating for about six months before it became news, and I was working during that whole time, and the only thing that changed was people's perception. Nothing about me changed. I'm still the same person that I am, and I've never defined myself by my relationship." The "Suits" actress said the new publicity has had challenges, but her friends and her "boyfriend" (yes, she used the word) support her. "We're a couple. We're in love," she said. "I'm sure there will be a time when we will have to come forward and present ourselves and have stories to tell, but I hope what people will understand is that this is our time. This is for us. It's part of what makes it so special, that it's just ours. But we're happy. Personally, I love a great love story."

Gigi Hadid is being sued by a paparazzi photographer for using one of his images on Instagram without his approval and allegedly making him miss out on a big payday. Peter Cepeda claims to have taken a snap of the model in New York City. The image showed Gigi with curlers in hair and wearing an Adidas jacket, but with the logo modified. The jacket read, "Hadidas," but the two last letters were scribbled out, to make it appear as though it said her last name. According to The Blaze, Peter says he's the sole owner of the copyright for the photos, and he's demanded several times that she take down the picture on her Instagram and Twitter pages, but her team has ignored him. In addition to damages, he's asked for an injunction prohibiting her from using his photos.

It was just not Aaron Carter's week. On Sept. 5, the singer tweeted that he got into a car accident and totaled his BMW. "Life is really so precious, I just got into a terrible accident and completely totaled my BMW M4," he wrote. Police later determined he was at fault and cited him. Then, over a 24-hour period, police showed up to his Florida home three times, all because of anonymous phone calls. The first anonymous caller said Aaron had been trying to buy a gun. When cops got there, no one answered the door, so they left. Two hours later, a caller said Aaron needed a psychiatric evaluation because he refused medical attention after the car accident. This time, police were able to make contact with Aaron and found out he had been in a crash and broke his nose but was fine. Then, a third caller, in the early morning hours of Sept. 6, said Aaron was threatening to harm family and others. On that occasion, TMZ said, "Cops showed up, knocked on the door but someone shut off a light and closed the blinds." It wasn't over either. On the evening of Sept. 6, cops again returned to his home after a friend reported that Aaron threatened to commit suicide. Cops weren't able to communicate with him. His rep, though, says all is fine.

Jesse Williams and his estranged wife, Aryn Drake-Lee, have finally agreed on something: The've reached a temporary custody agreement for their two children, Maceo and Sadie. The feuding parents will share joint legal custody. According to TMZ, who reported the agreement, "All decisions made regarding the health, welfare and upbringing will be made between the two of them." The agreement also indicates that neither parents can disparage the other in front of the kids. In addition, the new agreement also touches on Jesse and Aryn's dating lives, saying neither "shall introduce a person with whom he or she has a romantic relationship to the children until the relationship has endured at least six months."

Lil Wayne is recovering at home after suffering from another bout of seizures. Weezy was hospitalized on Sept. 3 in Chicago, reportedly from seizures. On Sept. 5, he was released, but doctors told him to take it easy for two weeks. The seizures, TMZ said, were brought on by Weezy's work schedule and his lack of sleep. In fact, he reportedly was going out to nightclubs after concerts and then heading straight to the studio. On Sept. 4, Wayne's daughter Reginae Carter tweeted that her father was "doing fine" while thanking fans for their concern. She also added, "Oh yeah .. & don't believe everything you hear." He has a long history of seizures.

Sharon Osbourne has never contended that her marriage to Ozzy Osbourne was perfect. This week, she dished on his infidelity, saying it happened not once, not twice, but six times! Six! "There we six of them," Sharon revealed of her husband's mistresses via Page Six. "Some Russian teenager, then a masseuse in England, our masseuse out here, and then our cook." She added, "Basically, if you're a woman giving Ozzy either a back rub or a trolley of food, God help you." In May of 2016, Ozzy's infidelity went public when hairdresser Michelle Pugh came out of the woodwork. "When I found out about the hairdresser, I couldn't believe it," she said. "Because none of these women were show ponies. He was doing it to fill the void in some way." Still, the couple has seen the light and recently renewed their wedding vows.

Lizzie Caplan is a married woman! The actress married British actor and producer Tom Riley in Italy. Tom confirmed the news by sharing a hilarious picture of them to Instagram from their wedding day. The pic shows the duo sitting on the ground laughing while others dance around them. "This one seems fertile. She shall make a satisfactory first wife," he wrote of the black and white pic. The couple met in early 2015 and got engaged in May 2016. 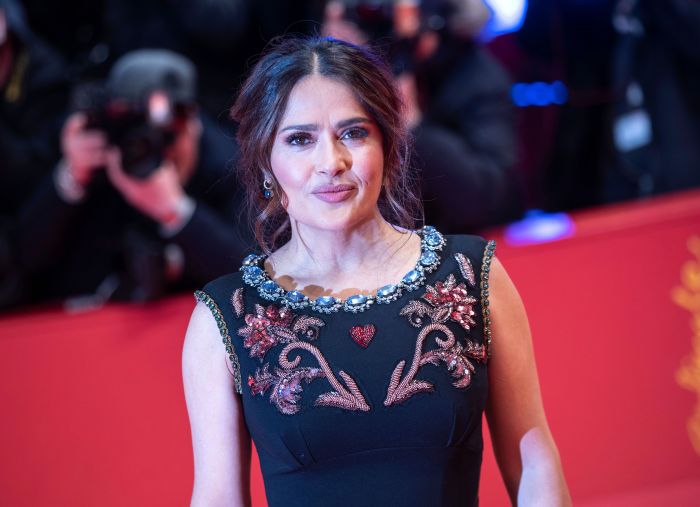 Up Next Trolled by Trumpsters