It's that time again! The MTV Video Music Awards take place on Aug. 27, 2017, and in honor of the fun award show, we're flashing back 20 years to check out what the stars wore to the 1997 ceremony. First up? The Spice Girls! The iconic girl group attended the show in their typical wild attire — Victoria Beckham in a stylish LBD, Geri Halliwell in a loud stars-and-stripes bodysuit with a fur, Mel B in animal print and bootie shorts, Emma Bunton in a cute minidress, and Mel C in athletic attire. The girls also rocked their typical footwear selections — the requisite platforms on Geri, Mel B and Emma, stilettos on Victoria, and sneakers on sporty Mel C. Now keep reading to see even more fabulous '97 VMAs style!

Mariah Carey looked gorgeous and showed plenty of skin 20 years ago at the 1997 MTV Video Music Awards in New York City on Sept. 6. The star wore a black bandeau top, bared her stomach and finished the look off with a matching skirt that featured a super-high slit on the side.

A young Gwen Stefani showed up to the 1997 MTV VMAs with No Doubt band members Tony Kanal, Tom Dumont and Adrian Young. She rocked a sheer and metallic copper top with a black sari-style skirt and short platinum hair, while her bandmates all got jazzed up in multicolored suits.

Lenny Kravitz brought along a young Zoe Kravitz to the 1997 MTV VMAs. The father-daughter duo matched and embraced Lenny's typical rocker-chic style, topping off their outfits with leather jackets. Lenny also opted to accessorize with a floppy purple hat and shades.

Only in the '90s! Supermodel Cindy Crawford went for green snakeskin at the 1997 MTV Video Music Awards, donning this strapless minidress complete with a slit up the thigh. Love the crimped hair, Cindy!

Carmen Electra showed off plenty of skin at the 1997 MTV Video Music Awards in a slinky sideless dress.

Adam Sandler has never been a trendsetter, but the comedian did his best at the 1997 MTV VMAs. The star wore shades on the red carpet with a brown velvet jacket over an Adidas T-shirt and bright red pants.

Elisa Donovan, do you prefer fashion victim or ensembly challenged? The "Clueless" star attended the MTV Video Music Awards that year in this awful look made up of a fur-trimmed cardigan over an LBD accessorized with a pink scarf and shiny black boots.

LL Cool J's VMAs outfit was all the rage back in 1997. The rapper rocked an all-black ensemble comprised of a tank top with a leather vest and pants — with one leg rolled up, of course.

Naomi Campbell looked like a glimmering goddess in this sparkly pink minidress. The supermodel added silver accents to the look, rocking metallic heels and a tiny matching bag.

Unlikely duo Martha Stewart and Busta Rhymes posed together at the 1997 MTV Video Music Awards, where they presented an award together. Martha opted for a conservative brown suit, while Busta rocked a surprising look. Up next, a full-length view!

While Martha Stewart played it cool and buttoned up, Busta Rhymes went in the opposite direction at the 1997 MTV VMAs. The musician rocked this red printed kimono-style dress with pants underneath to the big event.

Will Smith went all-black with a pop of color — red, one of the big hues of the night! — with his printed shirt at the 1997 MTV VMAs. He also fell in line with a lot of other men of the evening, rocking sunglasses at night on the red carpet.

Will Smith's future wife, Jada Pinkett, was also in attendance and also wearing red. The star embraced many '90s style trends by including cheetah print and a fur-trimmed coat in her bustier-anchored look.

This one looks like something we could see on a red carpet today! Fiona Apple opted for a sheer white net dress with an asymmetrical hemline at the 1997 MTV VMAs, where she took home a Moonman for best new artist.

Madonna certainly looked buttoned-up at the 1997 MTV Video Music Awards! She was covered from head to toe in a menswear-inspired black coat, white blouse, black tie and full-length skirt and boots.

Jewel kept things conservative on the red carpet, going with an all-black look made up of a skirt and printed blouse. 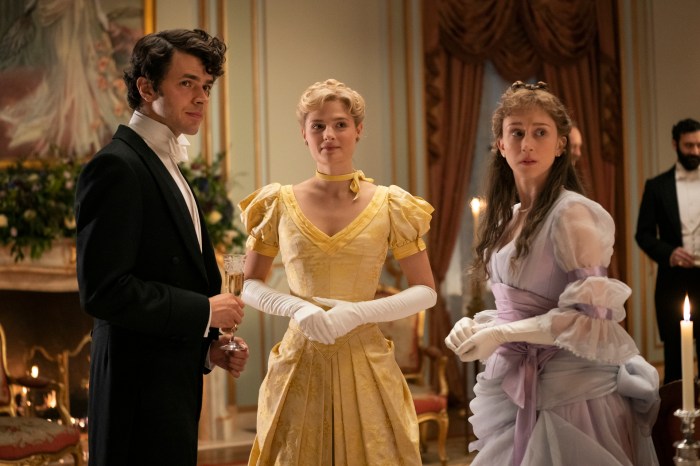