On June 6, 2018, the annual CMT Music Awards return to Nashville, bringing together some of the biggest names in country music. In honor of the ceremony, which allows fans to vote for their favorite country music videos from the year, Wonderwall.com is flashing back to the fashion at the 2008 CMT Music Awards to see what the stars were wearing a decade ago… starting with Keith Urban and Nicole Kidman. The couple, who'd only been married for two years when this pic was taken, also happened to be six months pregnant with their first child together, Sunday Rose Kidman Urban. That night, Nicole adorned her baby bump in a crimson Yves Saint Laurent gown with a braided front corset while Keith kept it classy in a plaid vest and matching trousers with a slate gray shirt and pocket chain. Keep reading to see more CMT Music Awards red carpet fashion from 10 years ago…

RELATED: What country stars looked like at the beginning of their careers

Surprise, surprise! Snoop Dogg turned up at the 2008 CMT Music Awards donning all black, from his cowboy hat to his shiny boots. The rapper was promoting his 2008 album "Ego Trippin'," which included the country-infused single "My Medicine" featuring country music legend Willie Nelson.

Jewel arrived at the 2008 CMT Music Awards with her then-fiance, world champion rodeo rider Ty Murray. While Ty kept it country in a pair of boot-cut jeans with a chocolate denim jacket, a mustard button-up and leather boots, Jewel went for a more classic look in a creamy white Gustavo Cadile mini with a lace overlay and some sexy, strappy gold heels.

RELATED: Most memorable CMT Music Awards fashion through the years

We're pretty sure Toby Keith shopped at the same store as professional rodeo cowboy Ty Murray. Both men wore similar brown denim jackets and cream-colored cowboy hats with blue jeans to the 2008 CMT Music Awards, but Toby mixed in a black T-shirt and a wooden-bead necklace for a slight variation on the look. Not gonna lie, Toby wore it best.

Faith Hill changed things up a bit when she arrived at the 2008 CMT Music Awards in all black — satin pants with a silky blouse featuring pleatwork along the bust and oversized sleeves. She tied the look together with sky-high black peep-toe Christian Louboutins, a playful black scarf and a sexy red clutch. Later that night, she transformed the style by wearing a rhinestone-embellished white top (with the same pants and shoes) while performing on-stage with her hubby, Tim McGraw.

Speaking of Tim McGraw, the handsome singer-actor didn't look too shabby at the 2008 CMT Music Awards. Instead of going full-on formal with his gray pinstriped suit, Tim added a touch of playfulness with a gray V-neck sweater and an unbuttoned collar. Of course, he also wore his trademark black cowboy hat. Unlike his lady love, Faith Hill, Tim wore the same look when they performed together at the award ceremony later that night.

Here's a major throwback for you. Miley Cyrus was just 15 years old at the 2008 CMT Music Awards. As a co-host, the pressure was on the former "Hannah Montana" star to look her best and boy, did she bring it. Miley stunned on the red carpet in this white-and-red Roberto Cavalli gown and shiny crimson clutch. Of course, throughout the night, Miley had several costume changes, but this look was one of our favorites.

Miley Cyrus's famous dad, Billy Ray Cyrus, was at the 2008 CMT Music Awards to serve as the evening's co-host. Billy kept it simple and sleek in a black jacket and shirt paired with frayed jeans and a black cowboy hat. Also making an appearance was Billy's perfectly shaped soul patch.

Sugarland bandmates Jennifer Nettles and Kristian Bush struck a pose at the 2008 CMT Music Awards. Jennifer was radiant in this turquoise one-shouldered mini that she matched with flowery turquoise heels. Kristian kept it casual in a black jacket over gray distressed denim and a blue-and-white pinstriped button-up.

Rascal Flatts members Joe Don Rooney, Gary LeVox and Jay DeMarcus brought the style (and the hair) to the 2008 CMT Music Awards. While all the men wore denim and jackets, each added their own flair. Joe Don (left) had fun button embellishments on his pant legs while Gary (center) played with color with that metallic plum jacket. Jay (right) went a little more traditional in the clothing department but made sure to add some height with his spiky hairstyle.

We'll be totally honest, we definitely don't love the asymmetrical purple Balenciaga dress — nor the exact-match strappy heels — that Taylor Swift wore to the CMT Music Awards in 2008. The wide cut of the skirt and minimalist halter-style neckline made the dress look almost frumpy (which is really painful for us to say about our girl T). But given the fact that she was just 18 at the time, it's fair to say Taylor's style was still evolving, so we'll cut her some slack.

Back at the 2008 CMT Music Awards, Blake Shelton arrived with then-girlfriend Miranda Lambert on his arm. The smiling duo looked comfortably coordinated but not overly matched. Blake's gray jacket added a handsome pop of contrast to his black dress shirt and denim, while Miranda's black-and-white lace mosaic dress hugged her curves beautifully.

Say what you will, but we think Paula Abdul reached new heights with this spiderweb-inspired gown at the 2008 CMT Music Awards. The sheer red off-the-shoulder dress had intensely shimmery detail that glittered across her body and made her stand out on the red carpet. We only wonder if Peter Parker had a hand in the design?

Don't worry, we feel uncomfortable looking at this photo of LeAnn Rimes and now-ex-husband Dean Sheremet too. Back in 2008, before the couple was involved in a very public cheating scandal, they arrived together at the CMT Music Awards in color-coordinated outfits. LeAnn wore a flapper-inspired silver mini from Julia Clancey with embellished rhinestone details on the straps and layers of sparkly silver chains, while Dean opted for a shimmery gray suit and white dress shirt.

Sigh. We adore Naomi Judd but the powder-blue frilly lace dress she wore to the 2008 CMT Music Awards was probably one of the worst looks at the show that year. The sheer pantyhose with open-toe sandals definitely didn't help her case either. Naomi's so beautiful she can wear just about anything, except this.

Did Alan Jackson get his 2008 CMT Music Awards show styling tips from Snoop Dogg? His cowboy shirt and jacket looked surprisingly similar to the rapper's, although Alan softened the look with edgy distressed denim and a silver-edged white cowboy hat. Wife Denise Jackson looked ravishing in a strapless leopard-print cocktail dress with a fur shawl and metallic heels.

When Brad Paisley and his wife, Kimberly Williams-Paisley, arrived at the 2008 CMT Music Awards, they had a little "sinner and saint" thing going on. Brad's black velvet jacket along with gray jeans and a charcoal tee contrasted with his lovely bride's all-white satin dress. Kimberly played up the gold embellishment on her bosom with matching gold earrings and open-toe gold heels. Of course, Brad's white cowboy hat was a coordinated nod in his wife's stylish direction.

We may love the color, but the cut of Sara Evans' dress at the 2008 CMT Music Awards is all wrong for her figure. The metallic violet hue was gorgeous with her raven hair and creamy complexion, but the odd bunching across the front actually made her look disproportionately lumpy. The bust and hemline of the skirt were also ill-fitting, making her curves all but disappear.

Pop-R&B star Bobby Brown arrived at the 2008 CMT Music Awards as a presenter, fresh off the heels of his 2007 divorce from Whitney Houston, looking like a stylish urban cowboy. His embroidered shirt, rhinestone-encrusted belt buckle, gray denim and studded black cowboy hat were venue-appropriate and, let's be honest, totally sharp. Perhaps he went the extra mile with his fashion to impress his new girlfriend (and now wife), Alicia Etheredge, who attended the award show with him that night.

Can you believe this picture was taken one day before Lady Antebellum released their self-titled debut studio album? Little did band members Charles Kelley, Hillary Scott and Dave Haywood know that they were about to have the No. 1 country album in the U.S. and the U.K. The trio arrived at the 2008 CMT Music Awards already looking like stars. Charles (left) paired a screen-printed tee with a metallic blazer and fitted denim, while Hillary opted for a playful gold tie tucked into her cute vest. Dave kept it a bit more casual with a dark T-shirt and worn black leather jacket. Together, the three looked ready to take on the world of music.

When Julianne Hough hit the red carpet at the 2008 CMT Music Awards, the "Dancing with the Stars" pro was a month away from releasing her first country album. The talented dancer and singer showed off her amazing figure in this pale lavender ruffled Roberto Cavalli halter dress that night. Sparkling peep-toe gold heels and gold earrings gave Julianne an extra dose of red carpet glam.

Is it just us or does Alison Krauss look like she's about to walk on the beach instead of the 2008 CMT Music Awards red carpet? We loved the "When You Say Nothing At All" singer's sherbet-swirl sleeveless maxidress and its soft, feminine silhouette. We also think her chunky gold cuffs and long gold necklace were the perfect accessories.

Yes, even "Thong Song" singer Sisqó hit the red carpet at the 2008 CMT Music Awards. The bleached-blonde hip-hop and R&B performer arrived at the ceremony wearing a loose-fitting black tux (sans tie) with an open-collar dress shirt and red-trimmed shades. While his pants are way too long, we still think Sisqó looked pretty stylish. 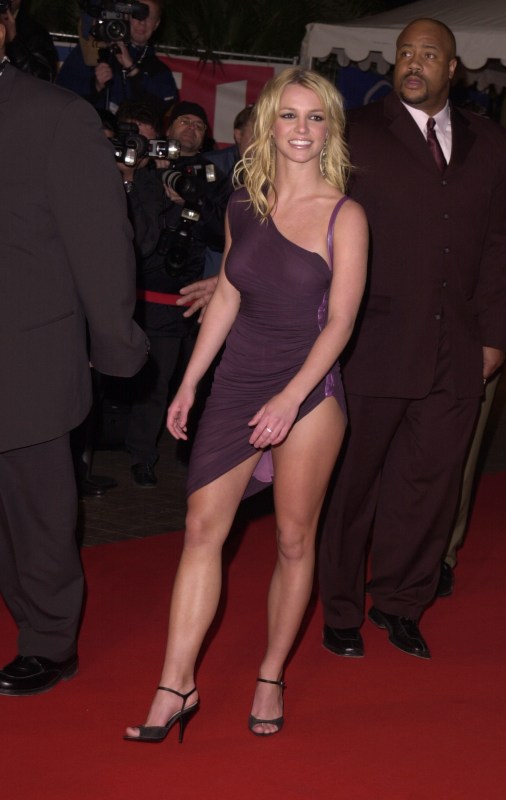 Up Next Not a girl, not yet a woman