As we near summer and the temperatures start to rise, Wonderwall.com thought it would be fun to help warm things up by rounding up the hottest celebrity bikini bodies over 40! Let's start with Nicole Kidman, 48, who showed off her phenomenal figure while taking a dip in Sydney. Keep reading to see more amazing bikini bodies…

While on a trip celebrating the big 5-0, Cindy Crawford looked better than ever in St. Barts. It's no surprise that the supermodel was named one of the "100 Hottest Women of All Time" by Men's Health. And her good looks have passed on to the next generation: Cindy's mini-me daughter Kaia Gerber is following in her mom's model footsteps.

This TV personality is seemingly destined to remain a "Skinnygirl" forever. Bethenny Frankel was spotted strutting her tiny, taught bod in an equally teeny pink bikini at the Generations Riviera Maya by Karisma resort in Mexico.

RELATED: Stars in the water

Eva Longoria looked anything but "Desperate" in a two-piece swimsuit while on vacation in Spain.

Brooke Shields wowed in this itty-bitty green bikini while vacationing in Mexico.

Lucky Will! Jada Pinkett Smith looked ageless and fit as she frolicked on a Hawaii beach in a one-piece bathing suit.

Clearly the GOOP lifestyle does a body good. Because, well, just look at Gwyneth Paltrow.

Television's highest-paid actress is extremely sexy and she owns it. Just check out saucy Colombian star Sofia Vergara while she was filming "Modern Family" on Australia's Bondi beach.

Gabrielle Union is married to NBA star Dwyane Wade. She has a flourishing career. Her bikini bod is still rockin'. This beautiful actress is proof that your 40s can be fabulous!

We're not sure how she does it, but Demi Moore's hot bikini body gives her adult daughters' physiques a run for their money!

"Beverly Hills, 90210" alum Jennie Garth wasn't kidding when she said, "Out with the old and in with the new." The actress revamped her look and shed some extra weight after her divorce from Peter Facinelli. You go, girl!

Courteney Cox has a bikini body stars half her age would envy.

Could it be that love is the key to unlocking the fountain of youth? Looks as if it may be true for J.Lo. Since she started dating her much younger beau, Casper Smart, Jennifer Lopez has exuded a youthful glow and body reminiscent of her "Fly Girl" days physique.

"The Real Housewives of Orange County" star Tamra Judge doesn't look a day over 30. She also doesn't look like she's given birth to four children, so she's clearly doing something right.

In case you needed further proof that Halle Berry truly is an ageless wonder, see what she looked like in a bikini while over the age of 40.

Despite all the ups and downs Tori Spelling has endured these past few years, one thing that hasn't changed is her svelte body.

Though it's been more than two decades since Naomi Campbell was declared a supermodel by the fashion industry, she still has what it takes to stomp out the competition on the catwalk — or at the beach. Take a look at those gams!

Jennifer Aniston may have shed the "Rachel" coif years ago, but her body has remained the same. We gotta say that aging gracefully (or not at all!) has been an easy feat for this A-lister.

Naomi Watts may have opted for a one-piece swimsuit, but this mother of two demonstrates how moms can still be sexy at any age.

Lisa Rinna's incredibly toned physique is sure to make anyone jealous, at any age. It's pretty unbelievable that she's approaching her golden years.

Sheryl Crow is all smiles as she enjoys a beautiful day at the beach. And who wouldn't if you had a body like hers?

Sharon Stone proves that being over a half-century old doesn't mean you can't have the body of a 20-year-old. We have to admit, Ms. Stone looks amazing in that itty-bitty bikini.

Helen Hunt in a bathing suit makes a case for 52 being the new 42. She looks flawless!

Nicollette Sheridan was innocently snapped showing off her toned body in a black string bikini, which proves she's not desperate for attention — she's just confident.

Former "The Real Housewives of New York City" star Kelly Bensimon may be known for her crazy antics and revealing attire on the show, but this former model took a rather modest approach when displaying her athletic body and long legs in a simple white bikini while in Florida.

Kelly Ripa is living the Hollywood dream. Not only does she have a gorgeous and loving husband in Mark Consuelos, three beautiful children and her very own talk show, "Live With Kelly & Michael," but she also has a rockin' body. What else can a girl ask for?

It's been more than 15 years since Heather Graham rolled onto the big screen as "Rollergirl" in "Boogie Nights," and by the looks of it, there's no doubt that it would not be difficult for this yoga-loving star to slip into her famous skate gear once again.

Former Victoria's Secret model-turned photographer Helena Christensen looks so good in a bikini that she could probably still be an Angel if she wanted to — don't you think?

Former "The Real Housewives of Atlanta" star Claudia Jordan rocked a tiny orange bikini in Miami Beach, Florida, and showed up all the younger women on the sand. 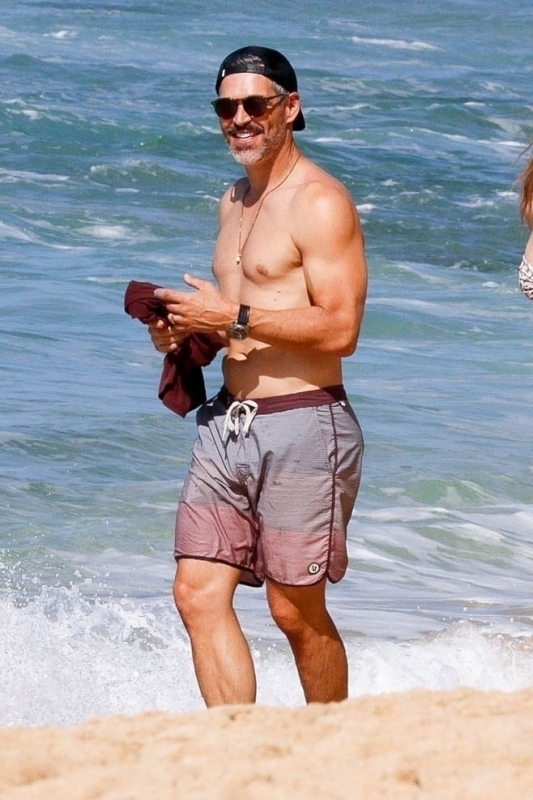