Some celeb couples love to coordinate their Halloween costumes. If you're looking for a matching costume idea, Wonderwall.com has you covered thanks to these Hollywood stars. Let's start with these two… "Modern Family" actress Sarah Hyland and fiancé Wells Adams took their love to new — and punny — heights when they dressed up for Halloween in 2018: Sarah donned a taco costume while her man was dressed up as Belle from "Beauty and the Beast." Get it? Keep reading for more…

On-and-off couple Bella Hadid and The Weeknd took their Halloween costume inspiration from the movies in 2018. They opted for "Beetlejuice" costumes with the music star going as the film's titular character and Bella as his reluctant bride, Lydia Deetz.

RELATED: The best movies about ghosts

Molly Sims and husband Scott Stuber dressed up as Jeannie and Major Nelson from "I Dream of Jeannie" to attend the Casamigos Halloween party in Beverly Hills on Oct. 25, 2019.

Leave it to Neal Patrick Harris and David Burtka to pull off an impressive couples costume! The dashing duo attended Heidi Klum's 19th Annual Halloween Party on Oct. 31, 2018, as Westley and Inigo Montoya from the beloved 1987 family film "The Princess Bride."

While they weren't a romantic couple, they were co-hosts! Michael Strahan and Kelly Ripa dressed as Luke Skywalker and Princess Leia for their "Kelly & Michael LIVE's 2015 Halloween Show" on Oct. 30, 2015. We love a "Star Wars" nod!

Now here's a costume every Pokémon fan is familiar with! On Nov. 1, 2015, Ansel Elgort shared this Instagram selfie with longtime girlfriend Violetta Komyshan. That year, the couple went as Team Rocket's Jesse and James for Halloween.

Harry Hamlin and wife Lisa Rinna dressed up as Sonny and Cher for the Casamigos Halloween Party in Beverly Hills on Oct. 28, 2016.

Cindy Crawford and husband Rande Gerber attended his Casamigos Halloween Party in 2018 dressed as a flight crew! Not pictured: George Clooney tagging along as a co-pilot!

Heidi Klum has made her love for the spookiest day of the year apparent on several occasions, so it makes sense that she's always dressed to impress! The supermodel is pictured here with ex-husband Seal — both dressed as robots — at her annual Halloween Party on Oct. 31, 2010. 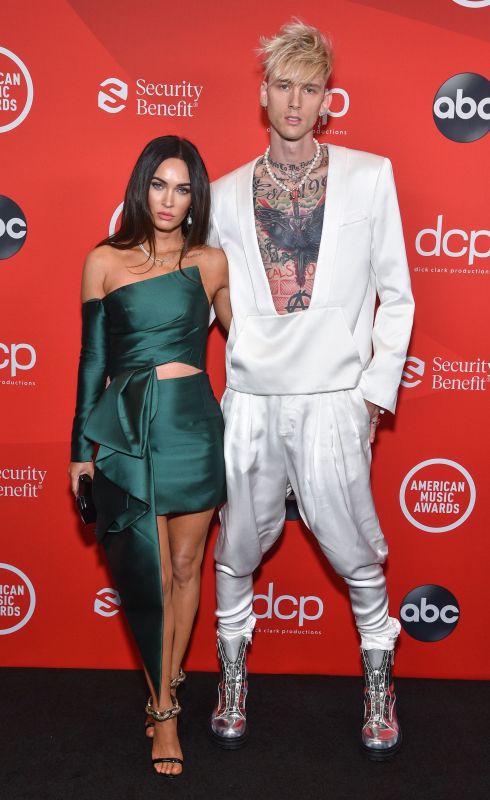 Up Next November Romance Report