Many celebrities love to coordinate their Halloween costumes with a partner or friend. If you're looking for a matching costume idea, Wonderwall.com has you covered thanks to these Hollywood stars. Let's start with these two… Nina Dobrev and boyfriend Shaun White swapped genders and dressed as chess prodigies Benny Watts and Beth Harmon from the miniseries "The Queen's Gambit" — with an assist from pal Adam DeVine as a chess piece — for halloween 2021.

Channing Tatum and Zoe Kravitz went Instagram official as a couple when he posted this photo of himself dressed as Robert De Niro's Travis from the film "Taxi Driver" and the actress dressed as Jodie Foster's "Iris" from the movie on his Instagram Story on Nov. 1, 2021.

Shawn Mendes and girlfriend Camila Cabello dressed up as Dia de los Muertos spirits in this photo he shared on Instagram on Oct. 21, 2021, captioning it, "Feliz día de los muertos."

Simple but effective! Dua Lipa dressed as a vampire while boyfriend Anwar Hadid was her victim for Halloween 2021.

Cindy Crawford and husband Rande Gerber attended his Casamigos tequila Halloween Party in 2018 dressed as a flight crew! Not pictured: George Clooney tagging along as a co-pilot!

"Modern Family" actress Sarah Hyland and fiancé Wells Adams took their love to new — and punny — heights when they dressed up for Halloween in 2018: Sarah donned a taco costume while her man was dressed up as Belle from "Beauty and the Beast." Get it?

In 2018, then-couple Bella Hadid and The Weeknd took their Halloween costume inspiration from a Tim Burton movie. They got all dressed up in "Beetlejuice" looks, with the music star going as the film's titular character and Bella as his reluctant bride, Lydia Deetz.

Leave it to Neil Patrick Harris and husband David Burtka to pull off an impressive couples costume! The dashing duo attended Heidi Klum's 19th Annual Halloween Party on Oct. 31, 2018, as Westley and Inigo Montoya from the beloved 1987 family film "The Princess Bride."

Jessica Biel dressed up as husband Justin Timberlake during his *NSYNC days while he donned a microphone costume for the 2019 Casamigos tequila Halloween party in Beverly Hills.

"Riverdale" co-stars Camila Mendes and Lili Reinhart went as a pair on Halloween in 2018: They dressed up as Pedro and Napoleon from the 2004 comedy "Napoleon Dynamite."

For Halloween in 2019, Jessica Alba and pal Kelly Sawyer teamed up to channel one of Hollywood's most iconic duos — Thelma and Louise, who were famously portrayed by Geena Davis and Susan Sarandon in the 1991 film.

Molly Sims and husband Scott Stuber dressed up as Jeannie and Major Nelson from "I Dream of Jeannie" to attend the Casamigos tequila Halloween party in Beverly Hills on Oct. 25, 2019.

Harrison Ford and wife Calista Flockhart were just a couple of nerds in love on Halloween in 2012.

Gigi Gorgeous and husband Nats Getty dressed up as Sally and Jack from "The Nightmare Before Christmas" for the UNICEF Masquerade Ball in Los Angeles on Oct. 26, 2019.

Chris Knight and Keltie Knight made us all LOL when they dressed as Justin Timberlake and Britney Spears circa the 2001 American Music Awards for Heidi Klum's 2017 Halloween party in New York City.

At the Casamigos tequila Halloween party in Los Angeles on Oct. 30, 2015, Channing Tatum and then-wife Jenna Dewan arrived dressed as adorable felines from the classic Dr. Seuss tale "The Cat in the Hat."

Harry Hamlin and wife Lisa Rinna dressed up as Sonny and Cher for the Casamigos tequila Halloween Party in Beverly Hills on Oct. 28, 2016.

Heidi Klum always goes all out for Halloween! Although she's no longer married to Seal, she had a very creative costume with him for Halloween in 2006. They went as Eve and the serpent in the Garden of Eden. Heidi's apple hid that she was eight months pregnant at the time.

Matthew Morrison and wife Renee were a supervillainous couple at his seventh annual Halloween-birthday party in Los Angeles on Oct. 29, 2016. The Broadway actor dressed up as the Joker, while Renee wore a Harley Quinn costume.

Kourtney Kardashian and then-boyfriend Scott Disick were a couple of superheroes for Halloween in 2012: Kourtney was Batman; Scott was her Robin.

Kelly Osbourne and then-love Luke Worrall went as eggs and bacon at Heidi Klum's Halloween party in 2009. The breakfast duo ended their engagement in 2010.

Mariah Carey and then-husband Nick Cannon were milk and cookies for their 2008 Halloween party in New York City.

Miles Teller dressed as a rabbit while now-wife Keleigh Sperry donned a sexy carrot costume at the Just Jared Halloween Party in Los Angeles on Oct. 31, 2015.

Jasmine Sanders and then-love Terrence J were straight out of Bedrock on Halloween. The couple dressed as Fred and Wilma Flintstone while attending a party in Los Angeles on Oct. 30, 2017.

Nats Getty was Prince Charming to now-wife Gigi Gorgeous's Cinderella at the Haunted "Carn-Evil For Good" Halloween Bash in Los Angeles on Oct. 29, 2017.

Cindy Crawford and Rande Gerber were out of sight dressed as a '70s disco couple at the 2017 Casamigos tequila Halloween Party in Los Angeles. 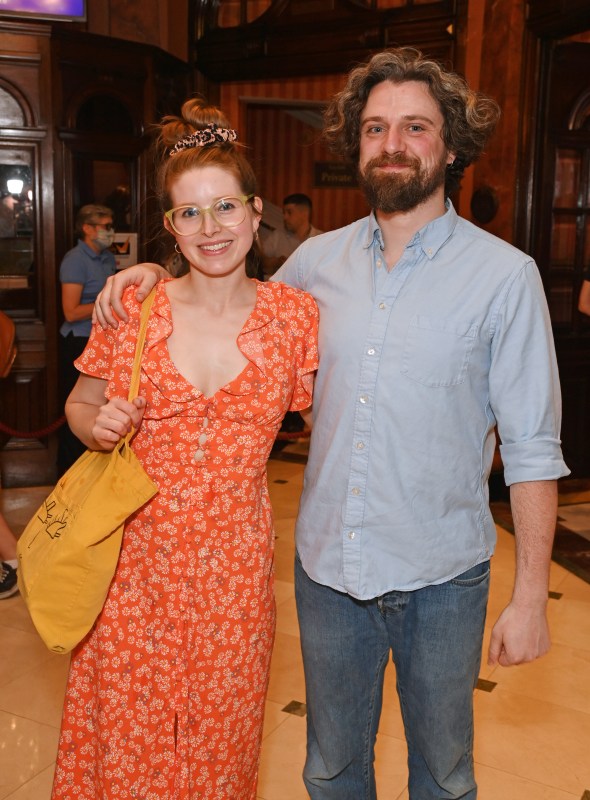