Exes are like opinions — we've all got 'em! And in Britney Spears' case, there are plenty! To mark the music star's 37th birthday on Dec. 2, 2018 — which she'll be spending with her current love, model and fitness expert Sam Asghari — we're taking a look back at Britney's exes to find out what they've doing in their post-pop princess lives…

Britney's first high-profile romance was with a fella named Justin Timberlake. The couple dated from 1999 to 2002. They were basically the homecoming king and queen of entertainment, delighting fans with their young love and matching award show outfits (like these iconic and unfortunate looks they wore to the 2001 American Music Awards). The onetime "The All New Mickey Mouse Club" co-stars split amid rumors that Britney cheated on Justin, something he has implied in his hit song "Cry Me a River."

These days, Justin Timberlake is one of the biggest stars in the world, having sold over 32 million albums and 56 million singles globally as a solo artist (he's sold more if you include his time in *NSYNC). He's won 10 Grammys, four Emmys and a slew of other awards. He has a fashion label, a few restaurants and a tequila brand too. In 2012, he married actress Jessica Biel and they welcomed a son, Silas, in 2015. (By the way, in October 2018, Britney posted a video showing herself working out while Justin's music played.)

Did you forget about this one? Back in 2003, Britney Spears and Colin Farrell briefly dated — they even appeared on the red carpet at the premiere of "The Recruit" together. Both remained coy about the romance, at one point claiming they were just friends. But ultimately, Britney admitted there was some spit swapping. "Yes, I kissed him," she told W magazine. "He's the cutest, hottest thing in the world — wooh! … But it was nothing serious."

Colin Farrell is a bona fide star. Since his fling with Britney Spears, he's gone on to win a Golden Globe in 2009 for "In Bruges." He also starred in a cache of blockbusters including "Horrible Bosses," "Total Recall" and "Fantastic Beasts and Where to Find Them." He's had his issues, though, and checked into rehab in December 2005. In 2017, he told Ellen DeGeneres that he was 10 years sober. Like Britney, Colin has two sons — James (with model ex Kim Bordenave) and Henry (with actress ex Alicja Bachleda). Colin has been a huge advocate for children with special needs as James has Angelman syndrome, a rare neuro-genetic disorder that causes developmental disabilities and neurological problems.

Huh?! That's how many people felt when Britney Spears began dating backup dancer Kevin Federline in 2004 (especially since actress Shar Jackson was pregnant with his second child at the time). Within three months, they'd gotten engaged, and they married in September 2004. Kevin and Britney had two sons together — Sean Preston, born in 2005, and Jayden James, born in 2006. Nearly two months after their youngest son's arrival, Britney filed for divorce. The filing reportedly caught Kevin totally off-guard. A day after the filing, he asked for physical and legal custody of their children. Their divorce was finalized in July 2007.

Kevin Federline was awarded physical custody of his and Britney Spears' children in October 2007 amid her much-publicized psychological breakdown. He attempted to launch a music career, started DJing and released a song called "Goat" in February 2018. He's also appeared on several reality TV shows. Kevin, who gained and lost a significant amount of weight in the wake of his divorce from Britney, married Victoria Prince in Las Vegas in 2013. He and Victoria welcomed daughters in 2011 and 2014 (K-Fed has six kids total). In 2018, Kevin — who for a decade had been getting $20,000 a month in child support from Britney — fought her for more money and won in an out-of-court settlement. In September 2018, she agreed to fork over several thousand more each month for their sons. Britney was also ordered to pay K-Fed $110,000 for his lawyer fees. She was "very unhappy" with the outcome, E! News reported.

It was one of the most infamous marriages in entertainment history: In the early morning hours of Jan. 3, 2004, Britney Spears married childhood friend Jason Alexander in Las Vegas. After a night on the town, they exchanged vows at the Little White Wedding Chapel. She wore a white baseball cap, ripped jeans and a crop top. But 55 hours later, she had the marriage annulled.

In the years following the ill-conceived marriage, Jason Alexander did several media interviews indicating that he was in love with Britney Spears. In 2015, Jason (seen here in 2006) was jailed in San Francisco for nearly four months for allegedly beating a girlfriend so badly that she needed crutches. He initially pleaded not guilty to all charges but ultimately pleaded guilty to domestic violence. After his release, he was put on probation for three years, which he finished in 2018.

Choreographer Wade Robson is sort of a legend in Britney Spears folklore — many media outlets alleged that she cheated on Justin Timberlake with Wade, something Justin implied in "Cry Me a River." Regardless of that tabloid fodder, Britney and Wade were linked for several months in 2001 and 2002.

Wade Robson is still deeply involved in the dance world. In 2007, he joined "So You Think You Can Dance" as both a judge and choreographer. He's also gone on to choreograph animated films, stage shows and even world tours. In 2013, he claimed that Michael Jackson sexually assaulted him when he was young, but his lawsuit was dismissed. Wade found love with Amanda Rodriguez, a creative directing partner on "So You Think You Can Dance." They have a child together and live in Hawaii.

Criss Angel was one of the many men Britney apparently dated in 2007 (others reportedly included producer J.R. Rotem, model Isaac Cohen and singer Howie Day). Criss was initially hired by Britney to help her with her 2007 MTV Video Music Awards performance, which was an utter disaster. Criss maintained that the two never dated, despite the many photos of them together.

Following his reported romance with Britney Spears, Criss Angel had a high-profile relationship with Playboy model-turned-reality TV star Holly Madison. In 2008, Criss began what would be a 10-year magic show in Las Vegas at the Luxor. The highly-skilled magician and illusionist was awarded a lifetime achievement award from the International Brotherhood of Magicians in July 2018. In December 2018, he launched a new show at Planet Hollywood. His personal life has been in the news often as well. In 2014, Criss and his girlfriend, Shaunyl Benson, welcomed son Johnny Crisstopher. In October 2015, the couple found out that Johnny had acute lymphoblastic leukemia. At the time, Criss and Shaunyl had just separated and Johnny had just relocated to Australia. Johnny has since moved to America, and Criss and Shaunyl have reconciled. Johnny is still receiving treatment. The couple will welcome a second child in January 2019.

Britney Spears' questionable choice in men continued when she dated paparazzo Adnan Ghalib for a year in 2007 and 2008. Many in Britney's inner circle were disappointed when her fling with Adnan began since they thought he was using her for fame and to further his career. They reportedly split over the telephone. Britney also filed a restraining order against him, which kept him from away from her for three years.

No surprise here, but Adnan Ghalib's profile took a huge hit after he dated Britney Spears. In 2012, he testified in a trial involving Britney's former manager, Sam Lutfi, and her family. In 2018, he did an interview with The Sun in which he claimed that he is essentially Britney's confidante and took credit for repairing her once-fractured relationship with her dad, Jamie Spears. Adnan now lives in Seal Beach, California.

Britney Spears' first true post-divorce romance came with her agent, Jason Trawick. Britney and Jason began dating in the summer of 2009. They got engaged in Las Vegas in December 2011. Britney's family was so sure of him that Jason was even named a co-conservator of the pop star's personal affairs alongside her dad. However, in January 2013, Jason and Britney split and ended their engagement. In doing so, he resigned from his position as co-conservator. "Britney wants to grow her family," a source told People magazine at the time. "Jason loves her boys but he is not in a place to have his own."

Jason Trawick has continued to work in the entertainment world since splitting with Britney Spears. In 2016, he executive produced the crime movie "Marauders," which starred Bruce Willis. He was once even linked to "Hunger Games" actress Leven Rambin. These days, he's betting big on the alcohol industry: He's a partner at Minute Mixology, a company that makes ready-made cocktails and single-serve cocktail mixers.

David Lucado (who?) began dating Britney Spears in February 2013. The two met at a party and she called him her "love" during an appearance on "The Ellen DeGeneres Show." But in the summer of 2014, the two split after pictures surfaced of David kissing another woman. "Well, by now everyone knows my boyfriend cheated on me," Britney told a crowd on stage at a Las Vegas concert.

The spotlight no longer shines on David Lucado, but that doesn't mean he's not doing big things. According to his LinkedIn page, he's a legal investigator for Rapid Sign Now in Southern California, a company he's been with since 2009.

In late 2014, Britney Spears struck up a new romance with writer and producer Charlie Ebersol. The son of legendary NBC Sports chief Dick Ebersol, Charlie was often spotted at Britney's Las Vegas show. The two didn't hide their romance, taking it public at the Billboard Music Awards in 2015. Earlier in the relationship, "everyone thought he might end up asking her to marry him," a source told People magazine. "It just faded away, and they moved apart." The couple split in June 2015 after eight months of dating.

Charlie Ebersol still has a pretty high profile. In 2017, he directed a documentary for ESPN called "This Was the XFL" as part of its 30 for 30 series. The next year, it was announced that Charlie, along with a former NFL executive, was creating a new professional football league called the Alliance of American Football, which is set to start play in 2019. On July 29, 2017, Charlie married StyleSeat CEO Melody McCloskey in Tennessee. 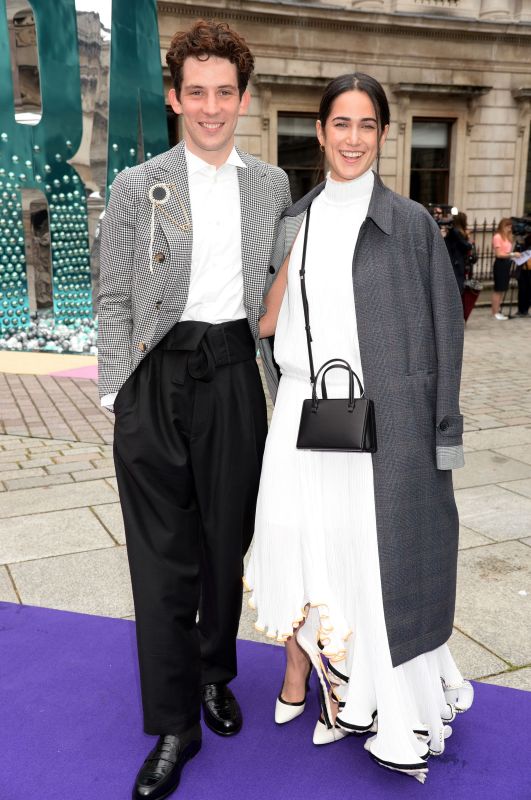