Wonderwall.com is taking a look back at all the celeb couples who got engaged in 2020, starting with this pop star and his bride to be… Aaron Carter proposed to Melanie Martin on June 12 after five months of on-off dating. The couple — who got together in January, split in March after Melanie was arrested for domestic violence then reconciled in April (charges were dropped) — announced their engagement with an Instagram photo of her diamond ring. "Lövē wins ❤️😍💍 #iloveyou3000 #engaged #fiance #ourlovestory," Aaron captioned a pic of the sparkler. Now keep reading for more…

RELATED: All the celeb weddings postponed or altered due to COVID-19

Leigh-Anne Pinnock, a member of British pop group Little Mix, revealed on May 29 that she and English soccer star Andre Gray are engaged. "Guys.. wtf has just happened… 😩😳😂 He bloody did it, and I said yes 😩 I'm marrying my soul mate, the man of my flipping dreams… I am lost for words, so I think I'm just going to go cry some more 😩😂 @andregray_ I love you so much 😩😍❤️ My world is literally complete," she captioned an Instagram slideshow of photos showing the proposal.

On May 23, "Southern Charm" alum Jennifer Snowdon announced on Instagram that she and her boyfriend of more than 10 years, Lee James, are engaged. "WE'RE GETTING MARRIED!!!" she captioned a photo slideshow depicting the proposal, which happened at an art studio on South Carolina's Sullivan's Island.

On May 4, "Dog the Bounty Hunter" star Duane Chapman, who lost wife Beth Chapman to cancer in June 2019, revealed to The Sun that he's engaged to new girlfriend Francie Frane, who also recently lost her husband to cancer. Dog said he hopes they can have the "biggest wedding there's ever been."

Will Forte's father, Reb Forte, revealed on the April 8 episode of "Who Wants to Be a Millionaire" that his comedy star son is "currently engaged." The lucky lady? Olivia Modling, Will's girlfriend of more than a year. A few days later on April 15, People magazine reported that the "Saturday Night Live" alum proposed over the 2019 holidays around the time his "The Last Man on Earth" co-star Mary Steenburgen referred to him and Olivia as soulmates on Instagram. "When one of your beloveds finds his soulmate," Mary actress captioned a Dec. 9 photo of the happy couple wearing matching llama holiday sweaters.

Former "The Bachelor" star Ben Higgins proposed to his girlfriend of a little more than a year, Jessica Clarke, in the backyard at her parents' home in Franklin, Tennessee, on March 27, they told "Entertainment Tonight," which published exclusive photos of the question-popping. Back in January, he said that he "definitely" planned to propose sometime this year.

Jeannie Mai and Jeezy got engaged at his home in Los Angeles on March 27, People magazine revealed on April 6. The rapper had planned to propose during an April vacation in Vietnam, but instead, because of travel restrictions sparked by the novel coronavirus pandemic, he came up with a new plan and proposed at home. "[He] decided to bring Vietnam to Jeannie with a surprise quarantine date night in his home filled with Vietnamese food and décor," the "The Real" co-host's rep told People. Jeannie and Jeezy started dating in November 2018.

On March 17 — their second anniversary — Home Free singer Adam Chance proposed to his girlfriend, Sami Matarante. His band revealed the news in the music video for their cover of Jason Isbell's "Cover Me Up" that debuted on May 29. "We were wearing onesies, and she thought we were about to record something goofy for Instagram — but I got down on one knee instead. I couldn't wait. It was the best decision I've ever made," he told People magazine of how he popped the question since he couldn't do it in Paris on tour as originally planned, due to the coronavirus pandemic.

The March 19 episode of "Very Cavallari" depicted colorist Justin Anderson's proposal to his boyfriend of more than five years, "Scream Queens" actor Austin Rhodes, at their home in Nashville. It's unclear when exactly the question-popping took place, though the bulk of the third season of the E! reality show was shot in late 2019.

Season 24 of "The Bachelor" ended on March 10 with Peter Weber popping the question to Hannah Ann Sluss in Australia just before the holidays … after Madison Prewett walked away from the competition over her realization that she and the pilot are just too different. Hannah Ann happily accepted his proposal but called things off with Pete a couple months later (in January) when she realized he couldn't fully commit to her emotionally because he still had feelings for Madison. On the live "After the Final Rose" special, Hannah Ann said that when he proposed to her, Peter "downplayed" the fact that Madison left of her own volition. "I had no idea what I was saying yes to," she said, adding that she felt "blindsided" when she learned the truth two days after she accepted his proposal. In February, after Hannah Ann dumped him, Peter reunited with Madison, but by mid-March, they were through.

Celebrity trainer Tracy Anderson accepted a marriage proposal from her boyfriend, Chris Asplundh, while celebrating her 45th birthday with friends — as well as her two kids from previous marriages — at Club Colette in Palm Beach, Florida, on March 3. According to Page Six, the duo were set up by a mutual friend in the summer of 2018 — not long after the fitness guru called off her engagement to Nick Riley. She's been married twice before.

Jenna Dewan and Steve Kazee took to Instagram on Feb. 18 to announce that they got engaged after about a year and a half of coupledom. The duo shared more happy news just a few weeks later: They welcomed their first child together, son Callum Michael Rebel Kazee, on March 6.

Pamela Anderson and longtime pal Jon Peters — whom she dated in the '80s (pictured) — tied the knot on Jan. 20 … the same day he popped the question after just a few days of texting with the actress while she was in India on a "spiritual cleanse" that left her heart feeling "open." According to a Page Six source, "She came back from her trip and Jon said to her, 'I love you, let's get married.' So she said, 'OK.'" Explained a second Page Six source, "The day she returned, Jon invited family and friends [over for lunch] and proposed to her. … She was vulnerable, and she accepted his proposal. It was only supposed to be lunch." They exchanged vows during that very same lunch but never filed a marriage certificate to make their union legal. They called it quits when the former "Baywatch" beauty realized she'd "made a terrible mistake" after just a day and a half of "marriage."

John Cena and his girlfriend of less than a year, Shay Shariatzadeh, sparked engagement rumors when fans saw her sporting a massive sparkler on her ring finger during a Feb. 17 outing in San Diego. (See a fan-captured photo here.) The wrestler-actor, who was previously engaged to Nikki Bella, further fueled engagement rumors by sharing marriage-themed posts on both Twitter and Instagram. He's yet to officially confirm or deny that he popped the question.

On Feb. 3, Us Weekly confirmed rumors that Sienna Miller and Lucas Zwirner are engaged. It's unclear when exactly he popped the question.

Wilmer Valderrama proposed to his girlfriend of less than a year, model Amanda Pacheco, on the beach in San Diego on New Year's Day.

On Feb. 14, Amanda Bynes took to Instagram to announce that she got engaged to her boyfriend of just a few months, Paul Michael, whom she reportedly met through either rehab, a halfway house or AA. Less than a month later, there were reports that they'd called it quits, though Michael denied that was the case. Either way, it's unlikely they'll ever be able to tie the knot under the terms of her conservatorship. On March 17, the duo announced that they're expecting their first child together.

On Feb. 11, People magazine broke the news that former Eagles guitarist Don Felder proposed to "Inside Edition" weekend anchor Diane McInerney during a sunset stroll on the beach in Malibu on Jan. 19.

Martha Hunt took to Instagram on Jan. 8 to announce that she's engaged to photographer Jason McDonald, to whom she was first linked in 2015. He popped the question in the Bahamas on Jan. 5.

"The Kissing Booth" actor Joel Courtney took to Instagram on Feb. 18 to announce that he's engaged to Mia Scholink.

"Younger" star Molly Bernard took to Instagram on Jan. 14 to announce that she and Hannah Lieberman are engaged.

Caila Quinn and her boyfriend of two years, Nick Burrello, got engaged on Jan. 2 during a family vacation in Sarasota, Florida, they told Us Weekly.

"Southern Charm" star Eliza Limehouse took to Instagram on Feb. 14 to announce that she and Struthers McBride are engaged after less than a year of dating.

Jourdan Dunn took to Instagram on Feb. 1 to announce that she got engaged to a mystery man she started seeing sometime last year. Despite her attempts to keep her fiancé's identity under wraps, multiple media outlets have reported that she's engaged to rapper Dion Hamilton, who performs under the name Sincere.

Bachelor Nation's Lesley Murphy — who competed for Sean Lowe's heart on Season 17 of "The Bachelor" — took to Instagram on Feb. 5 to announce that she's engaged to her boyfriend of a year and a half, Alex Kavanaugh.

Shannon Beador's ex-husband, David Beador, is engaged to Lesley Cook, his much younger girlfriend of two years. Lesley announced the news on her private Instagram account on Jan. 30, according to People magazine. David later confirmed the happy news.

Nikki Bella and Artem Chigvintsev took to Instagram on Jan. 3 to announce that they got engaged late last year.

On Jan. 2, People magazine broke the news that Peter Facinelli proposed to girlfriend Lily Anne Harrison during their holiday vacation in Mazatlan, Mexico.

During a Feb. 9 interview with "Entertainment Tonight," Maria Bello revealed that she and French chef Dominique Crenn "just got engaged" in Paris on Dec. 29.

People magazine reported on Feb. 14 that Jason Lewis proposed to his girlfriend of four years, producer Liz Godwin, while rock climbing along the beach in Malibu in late December.

During an interview with People magazine that hit the Internet on Jan. 9, county cutie Karen Waldrup revealed that she and her boyfriend of nearly two years, Cody Henson, got engaged in San Antonio, Texas, on Dec. 27.

On Jan. 25, Brandon Jenner implied on Instagram that he'd proposed to his girlfriend of just a year, Cayley Stoker, by posting a video of them dancing together, which he captioned with two engagement-ring emojis. The following day, he returned to Instagram to reveal that they'd actually tied the knot at the courthouse in Santa Barbara, California, five days earlier. They then welcomed twin boys on Feb. 19. 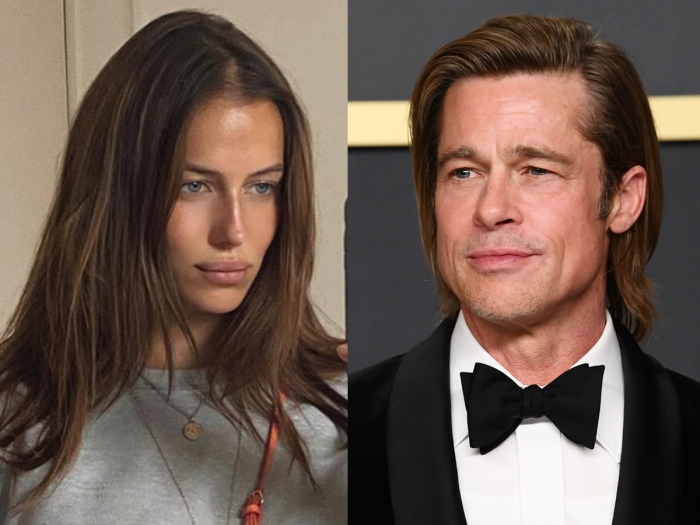