Are Kendall Jenner and Ben Simmons living together?

When romance rumors first hit Kendall Jenner and Philadelphia 76ers star Ben Simmons, they came with assurances the alleged couple had taken extra care to keep their relationship on the DL. That might be changing, though. TMZ reports the alleged couple are now sharing a $25,000-a-month rental in the Fairfax neighborhood of Los Angeles, where they're apparently been spotted hanging out regularly in recent weeks. The new digs, which feature five bedrooms and six bathrooms, is apparently a multi-month lease Kendall's using while she renovates Charlie Sheen's old house in Beverly Hills, which she bought last August. Neither Kendall nor her purported NBA star squeeze have confirmed or denied their status.

On the heels of a recent report indicating Kanye West is a changed man since he uttered those controversial "slavery" comments this spring comes some validation from a podcast hosted by New York Times music writer, Jon Caramanica. During the latest edition of "Popcast," Kanye made a number of revelations, including that he's no longer on medication and that he has a grand plan of making 52 records in 52 weeks someday, according to Vulture. The host also seemed surprised to see 'Ye gleefully strolling through Jackson Hole, where he spent a good deal of time working on new music for his latest projects recently, and talking to fans. "Kanye is very clear, super focused right now," a source told Us Weekly earlier this month. "The version of him today is very different than the one we saw a few weeks ago. He's focused on his craft right now and is excited [about] how much everyone is liking his new music."

Is Duchess Meghan's post-wedding style already influencing the likes of Angelina Jolie? It sure looked that way on Thursday, June 28, when Angie appeared at the Service of Commemoration and Dedication in London, where attendees were celebrating the 200th anniversary of the Most Distinguished Order of St Michael alongside her friend, the Bosnia-born British politician, Arminka Helić, Baroness Helic. Clad in a pale gray custom Ralph & Russo ensemble and a matching fascinator, the actress quickly drew comparisons to Prince Harry's new wife from People, which noted the duchess' recent habit of dressing in ivory, white and gray tones topped off by fascinators similar to the one Angelina wore this week. Angelina has been staying in the U.K. with her kids while she shoots "Maleficent 2."

As the #MeToo movement continues to become ingrained in American culture in 2018, how has it changed the lives of those who spoke out publicly about those they alleged assaulted, harassed or raped them? That's what the New York Times sought to learn when it sat down with more than a dozen victims of sexual misconduct this week. Ashley Judd, who spoke to the Times in the October 2017 expose about Harvey Weinstein, said despite being unsure how the public would react to her claims, she's found what the Times describes as "waves of accolades and thanks" and has become a more devoted activist in the realm of women's issues. "Now I want joyfully to shout from the rooftops, everyone come forward, everyone come forward," she said. "Everyone has to make their decisions, but I think we can safely say millions of others are here to offer support and hope. Nobody can do it for me, but I don't have to do it alone." Gwyneth Paltrow also checked in with Times about having accused the former Weinstein Company exec of sexually harassing her. "This is a system that has existed for thousands of years, and now you cannot behave that way," she marveled. "The psychological implications for those of us who have been exploited by men in power are so much to process, because we've built our identities and defense systems and strength out of protecting ourselves against this kind of system. For a mother of a 14-year-old girl, it's overwhelming to know we're living in a culture where ramifications exist for this kind of thing."

That didn't take long! Just a month after welcoming her second child with John Legend, Chrissy Teigen looked nothing short of stunning when the couple stopped by an event celebrating the launch of Restoration Hardware's collaboration with General Public, the curation and publishing company founded by Portia de Rossi, in Los Angeles on Wednesday, June 27. Asked how John and Chrissy's older daughter, Luna, is handling having a little brother, John recently told USA Today (via the Daily Mail) that the situation seems to be making Luna more pro-active about winning her parents over. "I think she's just becoming aware that he's the competition," the singer said of Luna and Miles, who was born this spring. "We'll see how that plays out," he continued, "but I think it might be good because it's making her, like, she's doing more to ingratiate herself to us, which means it might be a good thing for her to have a little competition."

Slowly but surely, Tristan Thompson is working his way back into the lives of Khloe Kardashian's family members. On Wednesday, June 26, Khloe was celebrating her 34th birthday alongside her sisters and Tristan when Kim Kardashian West posted an Instagram Story in which she could be seen asking the NBA star to let her back into his social media network. "Alright guys, it's Khloé's birthday. Should I ask this guy to unblock me?" Kim says into the camera in the clip, published by the New York Post. "For Khloé's birthday. Will you please unblock me?" Kim then asks Tristan. "It's only right!" Tristan says, laughing as Khloe appears behind him. "I got you." Tristan and Khloe, who welcomed their daughter, True, earlier this year, have reportedly been trying to work things out in the wake of Tristan's cheating scandal, which surfaced shortly before True was born. Tweeting back at a concerned fan on Twitter who didn't understand Khloe's decision to stay with Trsitan this week, Khloe said, "I'm proud of my strength. I appreciate your opinion and I hope you hold that same opinion to everyone else who has stayed in situations."

Four months after she announced she was taking a hiatus due to her battle with Graves Disease, Wendy Williams is reaching out to others affected with the immune system disorder to let them know they're not alone. Speaking at the Graves' Disease & Thyroid Foundation 2018 Patients and Family Conference via video this week, Wendy explained that she'd been diagnosed with Graves' disease and thyroid disease nearly 20 years ago and had been taking medication for them when something suddenly felt off. " I had the radioactive iodine [medication], taking my pill a day, minding my own business," she recalled (via the New York Post). "Then back in the fall or maybe around July of last year, I started feeling weird in the head but I'm thinking, 'OK, this is maybe a casualty of menopause or we were ramping up for season nine of the 'Wendy Show.' So, it wasn't until I passed out on my own show [in October] that … Anyway, life has completely changed." She added that because she loses her balance easily due to her condition, there's one change she's sure she's making. "The doctors tell me it's going to take at least six months — maybe a year — to level off my medication, which is why I always wear flats," she said. "I'm not wearing heels and falling and tripping." Last fall, Wendy worried fans when she passed out while wearing her Statue of Liberty costume on her show.

Reese Witherspoon is being dragged into the assault case pending against her ex-husband, Ryan Phillippe. Elsie Hewitt claims that while she was dating Ryan he grabbed her, hit her and threw her down a flight of stairs, allegations Ryan vehemently denies. Now, Elsie has filed a document demanding Ryan produce any text messages or other communication he had with his ex-wife about the alleged assault, which she says he's refused to turn in to the court, according to The Blast. Elsie is also reportedly asking to see messages she says she sent him suggesting he reign in his alleged drug and alcohol use, as well as documents related to his 2017 training regimen, including information about drugs and supplements he may have used at that time, as she alleges he assaulted her because of a steroid-fueled rage. Ryan's lawyer, meanwhile, tells The Blast: "It is significant that LA prosecutors — who take allegations of domestic violence extremely seriously — found these claims to be meritless and declined to file charges. These attempts to delve into Mr. Phillippe's private life are nothing more than harassment. Mr. Phillippe looks forward to having his day in court and clearing his name." Ryan has said he never physically abused Elsie and only treated her with "kindness and respect" when they were together. He believes she's trying to extort him with the lawsuit.

"Flip or Flop" fans are about to have one more way to indulge their El Moussa obsession. This week, HGTV announced plans to produce "Christina on the Coast," an eight-episode series starring Christina El Moussa. According to E! News, the series will highlight developments in Christina's design business expansion while letting viewers in on aspects of her personal life since she and Tarek El Moussa called it quits. (Whether that includes wedding bells for Christina and her boyfriend, Ant Anstead, remains to be seen.) "Design is my favorite part of the house-flipping process and I can't wait to be able to now work directly with clients and create a space they've always dreamed of having," Christina said in a statement published by E! "The past few years have brought a lot of change into my life and I am so excited to see what the next stage has in store for me both professionally and personally, there is so much to look forward to and this is only the beginning," she added. The series is slated to air early next year. Tarek, who has expressed interest in becoming a hot yoga teacher, is also reportedly in talks for his own show.

With the advent of his new series, "Pose," which revolves around the 1980s New York City drag ball scene, Ryan Murphy hopes to see lasting change with regard to casting as well as the stories that are being told on TV. "I was interested in bringing up a new group of people. When I was coming up in the industry, it was all white guys over 40 who had power. I'm interested in using my juice to promote other people," Ryan tells Us Weekly. "I think the days of casting a straight guy who puts on a wig and is a transgender person … those days are over. I feel like that's not fair and that's not real. There is so much talent in this community. We cast this show for six months and we read anybody who wanted to audition and I feel like you can feel it. It's an authentic show about an authentic group of people and I wanted to give them a chance, and they're so great!"The "Glee" creator adds: "It was a joy and I feel like that is how business has to be now. I feel like we're not gonna go back. We're going to go forward and be more true and authentic." 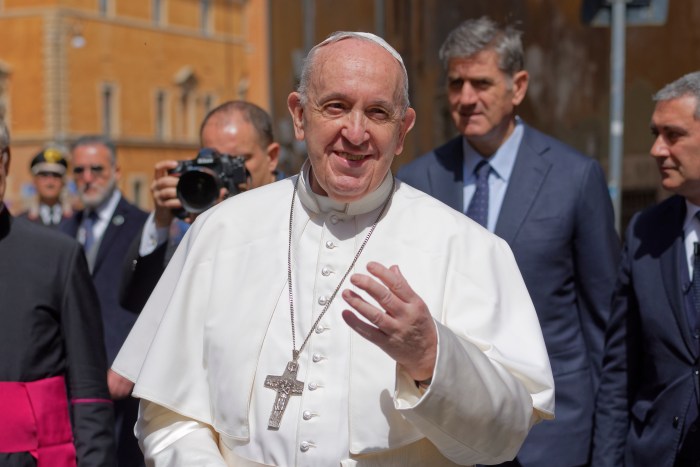