We'll always remember Sarah Jessica Parker's couture-loving character Carrie Bradshaw from "Sex and the City," but there's a lot more to her in real life than designer pumps and hunky men. In honor of the 35th anniversary of the release of SJP's movie "Girls Just Want to Have Fun" on April 12, 2020, Wonderwall.com is taking a look back at the star's life in photos! Keep reading to reminisce…

In the late '70s, Sarah Jessica Parker landed a small role in the Broadway play "The Innocents." But it was her lead role in the musical "Annie" in 1980 that really got the then-14-year-old's career started.

Sarah Jessica Parker landed her first TV series in 1982. She was cast alongside Amy Linker in "Square Pegs," though it only lasted one season. Little did she know then that she'd eventually land one of the biggest television shows in history with "Sex and the City" 16 years later.

Sarah Jessica Parker met fellow actor Robert Downey Jr. on the set of the 1984 film "Firstborn" and fell in love. SJP and RDJ — seen here at the 1989 Oscars — quickly became a hot Hollywood couple, but his drug addiction caused them to split by 1991.

Sarah Jessica Parker started to get bigger and better movie roles in projects like 1992's "Honeymoon in Vegas" alongside Nicolas Cage. She was even rumored to have dated her co-star for a brief while.

Who could forget Sarah Jessica Parker's bewitching role in the 1993 hit "Hocus Pocus" with Kathy Najimy and Bette Midler? Boo!

Finally, true love! In the early '90s, Sarah Jessica Parker met actor Matthew Broderick and the duo started dating. They're seen here at the Broadway revival of the musical "Damn Yankees" in March 1994.

After taking some smaller roles in movies like "The First Wives Club" and "Once Upon a Mattress," Sarah Jessica Parker was offered the role of Carrie Bradshaw on the HBO series "Sex and the City" in 1996. The series debuted in September 1998. And the rest is history…

Sarah Jessica Parker and Matthew Broderick tied the knot in New York City on May 19, 1997. She opted to wear a black gown for her ceremony, though she later admitted to Harper's Bazaar that she wished she'd been more traditional with her wedding attire. "White it up. I'd wear a beautiful, proper wedding dress, like I should have worn that day," said SJP, seen here as a newlywed with Matthew at the 1998 premiere of his film "Godzilla."

Just after the last episode of "Sex in the City" aired in 2004 after six very successful seasons, Sarah Jessica Parker won an Emmy for her performance as Carrie Bradshaw. It was her sixth best actress nomination and first win.

Sarah Jessica Parker returned to the big screen in 2005 with the movie "The Family Stone." The actress's performance alongside Rachel McAdams and Diane Keaton garnered her a Golden Globe nod.

Sarah Jessica Parker started to build a fashion and beauty empire outside of her on-screen "Sex and the City" couture wardrobe. She launched her own perfume, Lovely, in 2005 followed by the clothing line Bitten in 2007.

Sarah Jessica Parker solidified her role as a rom-com queen when she starred alongside Matthew McConaughey in "Failure to Launch" in 2006.

Sarah Jessica Parker has been close friends with Bravo executive and talk show host Andy Cohen since long before he became a household name thanks to his work in reality TV. In December 2019, SJP shared a few photos from Andy's two appearances on "Sex and the City" on Instagram along with the message, "Oh young love. Early friendship. I couldn't possibly have known what @bravoandy would come to mean nor how the love for him would grow." The besties are seen here at the opening night party party for Broadway's "Mary Stuart" at Tavern on the Green in New York City in April 2009.

Sarah Jessica Parker, Kim Cattrall, Cynthia Nixon and Kristin Davis reprised their roles yet again in the 2010 film "Sex and the City 2."

With time, Sarah Jessica Parker has cemented her reputation as a couture queen on screen and off. Her avant garde 2013 Met Gala ensemble was one way she showed the world how much her high-fashion style had evolved.

Sarah Jessica Parker returned to HBO in 2016 with a new show called "Divorce." She co-starred with Thomas Haden Church on the critically acclaimed series, which ran for three seasons and earned her a best actress Golden Globe nomination in 2017.

In May 1997, Sarah Jessica Parker and Matthew Broderick celebrated their 20th wedding anniversary! The couple are seen here at the New York City Ballet's 2017 Fall Fashion Gala in September 2017 just a few months after they hit the two-decade mark.

They grow up so fast! Sarah Jessica Parker and husband Matthew Broderick stepped out with their three kids — twin daughters Loretta and Tabitha and son James — for the Broadway opening performance afterparty for "Charlie and the Chocolate Factory" in New York City in April 2017.

Sarah Jessica Parker did not disappoint at the 2018 Met Gala where the theme was "Heavenly Bodies: Fashion and the Catholic Imagination." She arrived in a golden, glimmering creation by Dolce & Gabbana that included a reliquary-inspired headpiece emblazoned with jewels and a full nativity scene.

Next up for Sarah Jessica Parker? She'll co-star alongside real-life love Matthew Broderick — seen with her here at an opening night performance of "The Inheritance" on Broadway in November 2019 — in Neil Simon's "Plaza Suite" on Broadway in 2020. The pair were in rehearsals when the novel coronavirus pandemic hit in the spring of 2020, postponing their show. 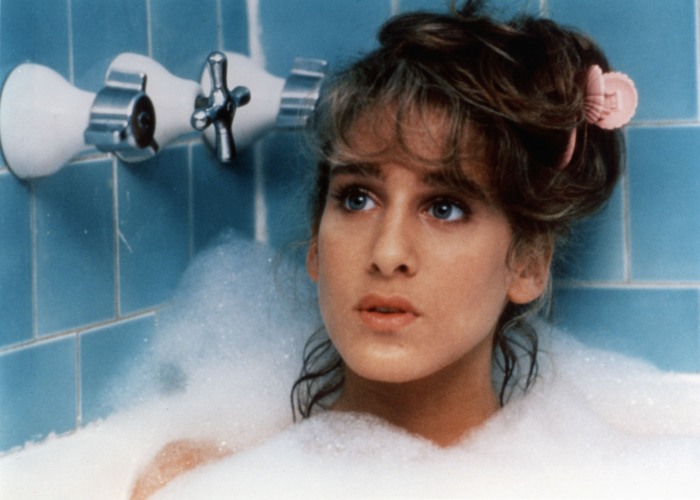 Up Next SJP's Life