Need a little Valentine's Day fashion inspo? In honor of the love-filled holiday on Feb. 14, Wonderwall.com is rounding up the best red dress moments from your favorite stars, starting with this stunner! She was a relative unknown at the 2011 Academy Awards, but everyone took notice of Jennifer Lawrence in this standout slinky Calvin Klein gown that year. The dress fit the rising star — who was nominated for best actress for her work in "Winter's Bone" — like a dream. Keep reading to see more fabulous celebrity red dress moments…

RELATED: Fashion hits and misses from the 2020 awards season

Who could forget Lupita Nyong'o's show-stopping red dress at the 2014 Golden Globes?! She was nominated for the very first time in the best supporting actress category that year for her work in "12 Years a Slave" and donned this fire-engine red off-the-shoulder Ralph Lauren gown equipped with a floor-length cape. And even though she didn't win, she certainly picked up accolades in the fashion department with this legendary frock.

Gorgeous in Gucci! Jennifer Lopez selected this rosy red Gucci gown for the 2011 Met Gala. It featured cut-outs and intricate floral detailing all along the shoulders.

Though she's since become a fashion dynamo, one of our favorite looks from Rihanna was actually a relatively simple red gown. The superstar sported this Azzedine Alaia number at the 2013 Grammys. It featured subtle sheer paneling, a halter-style neckline and a glamorous train.

At the 2009 Primetime Emmys, all eyes were on Blake Lively when she arrived in this phenomenal Versace number. The frock featured a plunging neckline and unique textures down the bodice, but it was that siren red shade that made headlines.

At the 2019 Grammys — after winning four Grammys! — Kacey Musgraves changed into this memorable minidress by Valentino. The frilly frock featured a dropped hemline and dramatic sleeves all in a killer candy red hue.

Looking beautiful in a rich burgundy hue, Zendaya made a statement on the 2016 Golden Globes red carpet. The star's sleeveless Marchesa confection featured a low neckline, a tiered skirt and a subtle all-over floral print in a rich red shade.

Even though it was her very first Met Gala , Gigi Hadid wowed on fashion's biggest night in 2015 thanks to her dress selection. The model donned in this Diane von Furstenberg gown, which featured sequins and beading, a plunging neckline and a thigh-high slit.

It was an elegant Elie Saab gown for Taylor Swift at the 2012 Billboard Music Awards. The pop star arrived in this sweet sleeveless number that featured lace and the illusion of sheer paneling along the bodice plus a flowing skirt with a ruffled hemline all in a bold red shade. That year, the star took home both best dressed accolades and the Woman of the Year prize.

Michelle Williams was a vision in this cherry red lace Louis Vuitton confection at the 2012 Academy Awards. The actress, who was nominated for her work in "My Week with Marilyn" that year, sported a beautiful strapless design featuring a peplum detail at the waist and a tiny train.

At the premiere of "Tree of Life" in 2011, Angelina Jolie shirked her usual black wardrobe for this glorious pop of color. The movie star arrived wearing an asymmetrical Jenny Packham gown that featured a ruffled layer over the bodice and a ribbon belt at the waist, making us wish Angelina rocked bright colors more often!

Cindy Crawford opted for this iconic plunging red Versace gown when she attended the Oscars back in 1991. It was the supermodel's first public appearance with then-boyfriend Richard Gere.

Selena Gomez rocked red leather at the UNICEF Ball in 2016, and we adored her unique Louis Vuitton design. The frock featured ruffled sleeves, a super-low neckline and cut-outs of the fashion house's iconic flower logo down the front of the skirt.

Model Alessandra Ambrosio stunned in this shiny satin red number at the Vanity Fair Oscar Party in 2017. The strapless Ralph & Russo design featured a sweetheart neckline, one off-the-shoulder sleeve and a daringly high slit up to her hip.

We're a sucker for red and ruffles, so Dakota Johnson's darling Dior gown at the 2016 BAFTAs definitely made the list. We loved the simple spaghetti-strap start and the way the frock featured a soft ruffled layer at the waist and down the full skirt all the way to the floor.

Does it get much better than burgundy velvet? Diane Kruger certainly made a case for the luxurious fabric in this divine color at the 2006 Golden Globes, where she arrived wearing a gorgeous gown with thick straps, a column skirt and a subtle train.

Yara Shahidi rocked the Valentine's Day dress of our dreams back at the "Crazy Rich Asians" premiere in 2018. Her pretty Prada mini featured thin straps and layers of little ruffles for a perfectly sweet movie premiere ensemble.

Nicole Kidman was labeled the best dressed star at the 2007 Academy Awards, and for good reason! She arrived in this beautiful Balenciaga gown that included a dramatic bow detail at the neck that draped behind her and also served as a glamorous train.

Kendall Jenner sported this sleek Romona Keveza gown in the perfect rosy shade of red at the amfAR gala in New York City in 2015. The model stunned in the one-shouldered asymmetrical gown, which featured a fitted silhouette and thigh-high slit.

Anne Hathaway nearly matched the famous red carpet of the Academy Awards back in 2008, when she attended as a presenter. The actress arrived in a one-shouldered Marchesa gown with a ruffled floral detail along the shoulder.

Red ruffles atop red ruffles! Amal Clooney arrived at the 2015 Met Gala in this crimson Maison Margiela gown that featured a strapless silhouette and tiered asymmetrical ruffled layers in a sleek and shiny fabric.

The scalloped neckline of this next dress is what landed it a spot on this list! Sarah Paulson sported this sweet strapless gown by Osman in a coral red shade at the HBO Golden Globes afterparty in 2015 .

Red is clearly a popular color choice at the Oscars. We loved the fiery red hue of Viola Davis's slinky Armani gown at the 2017 Academy Awards. The stunning frock ended up being a good luck charm, as the star took home a best supporting actress statue that year for her work in "Fences."

Jennifer Lawrence was a big winner for many reasons at the 2016 Golden Globes! For one, she took home a best actress award for her performance in "Joy," which is certainly something to celebrate. And two, she rocked this eye-catching custom red Dior gown complete with sexy side cut-outs that balanced futuristic chic and classic elegance perfectly.

Jennifer Aniston wowed in custom red Christian Dior dress back at the 2013 Academy Awards. We loved her strapless ballgown, which made her look like a princess on Hollywood's biggest night.

Shay Mitchell sported the perfect ruby red Christmas party dress to Toronto's Jingle Ball in 2017. The Cinq a Sept minidress had teeny spaghetti straps and a funky tie detail on the left side of the hemline, spicing up the otherwise simple satin frock.

At the 2012 Academy Awards, Emma Stone was on hand as a presenter. She certainly made a statement on the red carpet in this stunning red dress by Giambattista Valli featuring a dramatic bow detail at the neck. 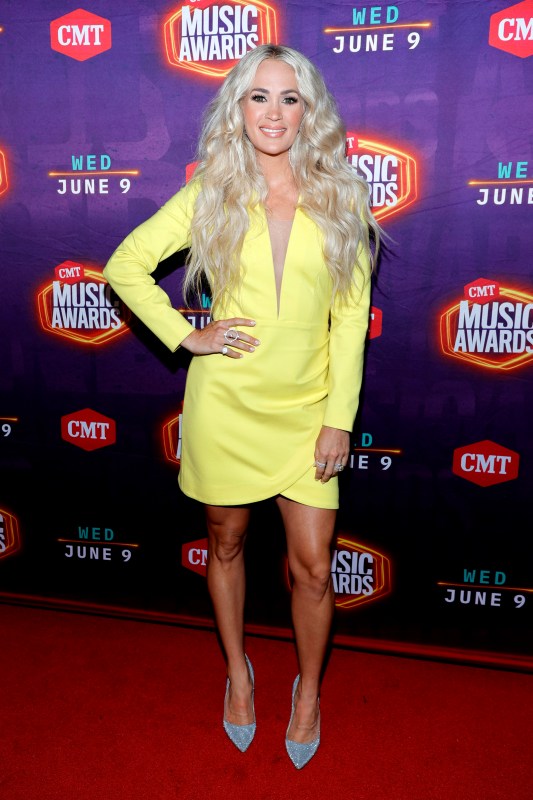