It's the 25th annual Critics' Choice Awards and what better way to hit the red carpet than as an adorable couple? Join Wonderwall.com as we take a look at some of the cutest duos to hit the red carpet at the highly-anticipated event… starting with Adam and Jackie Sandler! The exceptional actor-comedian was beaming as he hit the red carpet with his wife Jackie. Adam Sandler was nominated for best actor for his role as a personable, sports betting jeweler in A24's "Uncut Gems." The Josh and Benny Safdie film was also nominated for best picture at the award ceremony.

RELATED: 2020 Critics' Choice Awards: see all the photos from the red carpet

An adorable match! Long-time couple Adam DeVine and Chloe Bridges hit the red carpet with the brightest smiles on their faces. Chloe stunned in a deep red gown while Adam kept things streamlined in a good looking tux.

This is one duo we will certainly be seeing a lot of on various awards show red carpets! Power writing couple Noah Baumbach and Greta Gerwig hit the red carpet at the 25th annual Critics' Choice Awards looking sleek and sophisticated. Noah Baumbach's "Marriage Story" was up for eight Critics' Choice Awards including best picture, best original screenplay and best director. Greta Gerwig's "Little Women" was also a big contender at the awards ceremony — the film adaptation was up for nine awards including best picture, best director and best adapted screenplay.

Next is none other than talented duo Amy Sherman-Palladino and Daniel Palladino! The masterminds behind "Gilmore Girls" were nominated for best comedy series at this year's Critics Choice Awards for "The Marvelous Mrs. Maisel."

Anne Hathaway hit the red carpet with husband Adam Shulman looking all glitz and glam and we seriously loved it! The actress was nominated for best actress in a limited series or movie made for television for her exceptional role in episode 3 of Amazon's "Modern Love." This was Anne's first red carpet since giving birth to the couple's second child back in December 2019 — and if there's one thing we're sure of, it's that she looked absolutely glowing!

Writer-comedian Keegan-Michael Key hit the red carpet with his wife Elisa Key. The couple kept things simple yet dramatic in their all-black ensembles.

We love these supportive siblings! Joaquin Phoenix and Rain Phoenix hit the red carpet together at the 25th annual Critics' Choice Awards and looked seriously fashionable doing it. Actress-musician Rain Phoenix stunned in a tailored, all-white jumpsuit while her brother Joaquin Phoenix kept things simple in a black suit. Joaquin was nominated for best actor for his starring role in "Joker."

Chris Hardwick posed for photos with his wife Lydia Hearst on the red carpet ahead of the award ceremony. The comedian-TV host looked super fashionable in his sleek, all-black ensemble while his wife looked beautiful in a black dress with a cute pop of pink!

Acclaimed actress Alex Borstein attended the event with her father Irv Borstein! Alex looked gorgeous in her bright red ensemble and Irv looked classy in his suit and tie combo. The star was nominated for best supporting actress in a comedy series for her role in Amy Sherman-Palladino's "The Marvelous Mrs. Maisel."

Olivia Wilde and Jason Sudeikis looked adorable when they hit the red carpet! Olivia stunned in a vibrant coral gown while Jason looked classy and cool in his dark hued ensemble.

Wanda Sykes and her partner Alex Sykes were serious style mavens on the red carpet! The multi-talented actress-comedian was nominated for best comedy special for "Wanda Sykes: Not Normal" which is on Netflix.

Sebastian Maniscalco attended the award ceremony with his wife Lana Gomez! The actor-comedian was at the event to support his film "The Irishman" which was nominated for a slew of awards in major categories including best picture, best score, best actor and best supporting actor.

Jared Harris and his wife Allegra Riggio attended the 25th annual Critics Choice Awards together! The "Mad Men" actor went for a bold yet sophisticated look in his eye-catching tuxedo, while Allegra went for a simple, black velvet gown with gold accents!

Actor Walton Goggins hit the red carpet with none other than his wife Nadia Conners. Walton was nominated for best actor in a comedy series for his role in CBS' "The Unicorn."

Actor couple Tim Blake Nelson and Lisa Benavides attended the 25th annual Critics Choice Awards together! The duo looked classy and cool as they posed for photos ahead of the ceremony.

Iconic writer-producer Norman Lear attended the event with his wife of over 30 years Lyn Lear! The celebrated producer behind cult-classic sitcoms like "All in the Family," The Jeffersons" and "Good Times" looked dapper with his white fedora, while his wife looked as elegant as ever in all-black.

It truly was a happy day! "Happy Days" actor Henry Winkler hit the red carpet with his wife Stacey Weitzman. The couple looked sleek in their dark toned outfits!

Filmmaker Rian Johnson hit the red carpet with his wife Karina Longworth. Rian was nominated for best original screenplay for "Knives Out."

Acclaimed actor Harvey Keitel showed up to the red carpet with his wife Daphna Kastner! The "Reservoir Dogs" actor and his leading lady looked edgy and sophisticated in their dark tone get-ups ahead of the event.

Actor-comedian Eddie Murphy attended the award ceremony with his partner Paige Butcher. The "Dolemite Is My Name" actor was also the winner of the Lifetime Achievement Award at the 25th annual Critics' Choice Awards. 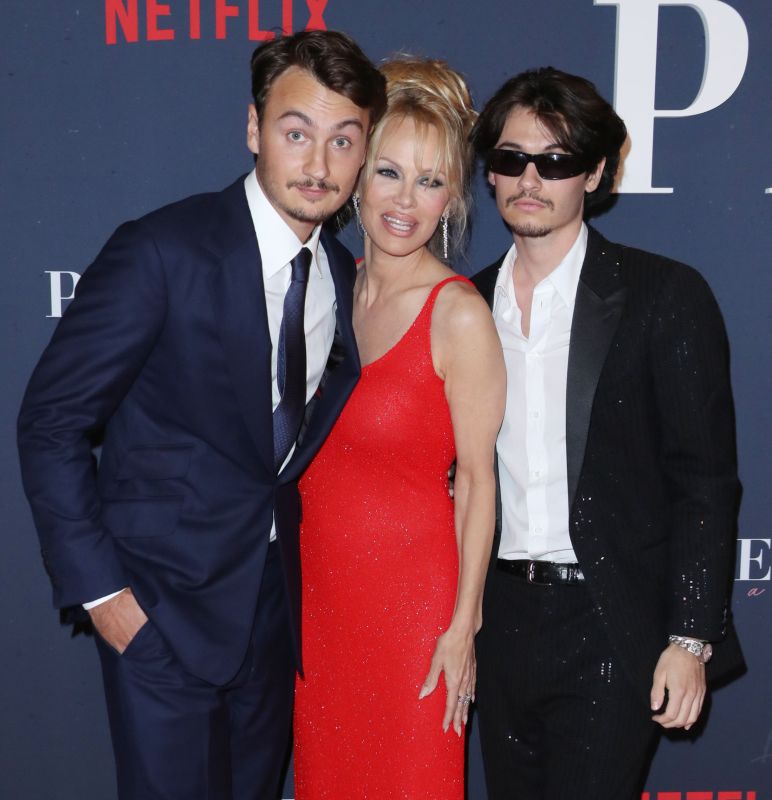