Wonderwall.com is taking a look at how our favorite celebs have enjoyed a little sun and sand in 2020, starting with this model… Kendall Jenner looked chic while enjoying a beach day in Malibu on July 18. Keep reading to see dozens more stars at the beach and in swimwear this year…

Matt Damon got some vitamin D during a day at the beach in Malibu on July 15.

Alessandra Ambrosio ran around in the Pacific Ocean during a visit to a Malibu beach on July 11.

Robin Thicke spent some time at a Malibu beach with his fiancée and their kids on July 17.

Ireland Baldwin hit the beach in Los Angeles on July 17.

Chad Michael Murray enjoyed a beach day with his family in Malibu on July 9.

Sylvester Stallone went for a walk on the beach in Malibu with daughter Sophia Rose Stallone on July 16.

King Felipe VI of Spain and Queen Letizia took a walk along the beach in Benidorm, Spain, on July 3.

Sofia Richie did a little sunbathing in Malibu on July 16.

Scott Disick enjoyed a solitary moment at the water's edge while in Malibu on July 18.

Dennis Rodman walked along the beach in Hollywood, Florida, on July 19.

Chrissy Teigen was all smiles as she kicked back in the seaside resort town of Puerto Vallarta, Mexico, with her family during a holiday getaway on July 6.

Brody Jenner rode some waves on an electric surfboard in the middle of the ocean off the coast of Los Angeles on July 4.

A bikini-clad Sofia Richie soaked up the sun on a balcony in Malibu while hanging with some friends on July 5.

Sarah Jessica Parker spent a day at the beach with her family in the Hamptons on July 4.

Jonah Hill carried his surfboard as he walked down the beach in Santa Barbara, California, alongside fiancée Giana Santos on July 5.

Josh Brolin walked down to the beach in Malibu with his surfboard and family in tow on July 4.

"The Bachelorette" alum Tyler Cameron spent some time on a boat and went wakeboarding with friends including "The Bachelor" star Matt James in Jupiter, Florida, on June 23. Keep reading to see more of Matt…

Upcoming "The Bachelor" star Matt James spent some time on a boat and went wakeboarding with friends including Tyler Cameron in Jupiter, Florida, on June 23.

Ireland Baldwin wore a retro-inspired gingham-print bikini as she played with her dog on the beach in Malibu on June 27.

Kate Hudson hit the beach in Malibu on June 23 wearing a straw sun hat and denim cut-offs with her tie-dyed one-piece swimsuit.

Hailey Bieber slipped into an animal-print bikini after climbing aboard a yacht in Sardinia, Italy, on June 23.

Bella Hadid got some sun in an orange bikini after climbing aboard a yacht with model pal Hailey Bieber in Sardinia, Italy, on June 23.

Alessandra Ambrosio enjoyed a day at the beach playing volleyball with friends in Santa Monica, California, on June 21.

Comedians Chris Rock and Adam Sandler went for a walk on the beach in Malibu on June 18.

Actress-model Rosie Huntington-Whiteley enjoyed a dip in the ocean during a Malibu beach day on June 14.

Gerard Butler hit the beach in Malibu to surf some waves with friends on June 16.

Josh Duhamel went for a swim in the Pacific Ocean in Malibu on June 13.

Adam Brody caught some waves in Malibu on June 1.

Minnie Driver carried her longboard while boyfriend Addison O'Dea grabbed the cooler bag during a Malibu beach day on June 14.

Mira Sorvino and husband Christopher Backus hit the waves in Malibu on June 14.

Helen Hunt caught some waves on her boogie board at a Los Angeles beach on June 7.

Owen Wilson took a dip in the ocean in Malibu on May 19.

Dylan Penn donned a green bikini for a Malibu beach day with mom Robin Wright (not pictured) on May 10 — Mother's Day.

Brody Jenner rode a motorized surfboard in the Pacific Ocean near Malibu on May 10.

Kim Kardashian West wore a sparkly maroon bikini on a sunrise stroll outside her family's Malibu rental home on May 5.

Reese Witherspoon went for a beachside bike ride in Los Angeles on May 2.

Sofia Richie went for a walk on the beach in Malibu on April 23. Keep reading to see her pounding sand with boyfriend Scott Disick and their dog…

Scott Disick, Sofia Richie and their dog, Hershula, joined a female friend for a walk on the beach in Malibu on April 23.

Scott Disick texted while walking on the beach in Malibu on April 23.

A wetsuit-clad Gerard Butler grabbed his surfboard and drove down to the beach in his ATV for a solo surf session in Malibu on April 26.

Robin Wright and husband Clement Giraudet took their dog to the beach in Malibu on April 5.

Model and former "The Bachelorette" star Tyler Cameron showed off his beach bod while working out in Palm Beach, Florida, on March 18.

Gisele Bundchen struck a pose while frolicking on the beach in Costa Rica in a chocolate-brown bikini top and matching leopard-print bottoms on March 8.

NFL quarterback Tom Brady got a little sun during a beach vacation with wife Gisele Bundchen in Costa Rica on March 11.

Alessandra Ambrosio flaunted her fantastic figure for a Gal Floripa photoshoot on the beach in Riviera Maya, Mexico, on March 4.

Gerard Butler and girlfriend Morgan Brown had a picnic on the beach in Malibu on March 30.

Reese Witherspoon and son Tennessee Toth went for a bike and scooter ride next to the beach in Malibu on April 19.

Reese Witherspoon's husband, CAA agent Jim Toth, went for a run along the shoreline in Malibu on April 11.

An inked-up Jonah Hill snapped some photos on his phone after a surfing session in Malibu on March 19.

Lizzo was spotted living her best life while vacationing with friends in Rio De Janeiro, Brazil, on Feb. 8.

Chrissy Teigen enjoyed some fresh air and football on the beach in Malibu on March 16 while in her robe.

Gisele Bundchen was all smiles as she enjoyed a stroll along the beach in Costa Rica on March 23.

Taylor Dye and her new husband, Josh Kerr, walked along the beach during their honeymoon at the Sandals Grenada resort on Feb. 5.

Retired NFL star Rob Gronkowski, who's now an analyst for Fox Sports, cooled down in the ocean while enjoying some time at the beach in Miami on Feb. 12.

Dame Judi Dench was spotted snorkelling with friends while on holiday in Bridgetown, Barbados, on Feb. 8.

Joel Kinnaman showed off his fit body while arriving for a surfing session in Manhattan Beach, California, on Feb. 20.

Teri Hatcher snapped some photos while walking on the beach in Malibu on March 11.

Sam Smith hit a rocky Aussie beach in Sydney with friends on Feb. 12.

Alessandra Ambrosio reminded us all why she's a supermodel as she hit the beach in Florianopolis, Brazil, on Jan. 16.

Model and DJ Chantel Jeffries hit the beach in Miami on Feb. 3.

Olivia Culpo showed off her figure as she hit the beach in Cabo San Lucas, Mexico, on Feb. 15.

Karrueche Tran took a dip in the Atlantic Ocean off the coast of Miami on Feb. 3.

French Montana chatted on his phone while enjoying a beach day in Miami on Feb. 6.

Model Amber Valletta was snapped while posing for a photoshoot on the beach in Malibu on Jan. 30.

Mark Wahlberg took a dip in the ocean while vacationing in Honolulu, Hawaii, on Jan. 9.

Model Bella Hadid struck a pose in a denim-look bikini over the New Year's holiday while vacationing in St. Barts.

On Jan. 4, model Devon Windsor took a stroll on the sand in Miami while rocking the Freya Full-Piece swimsuit from her eponymous swimwear line.

Luke Evans hit the beach in Miami after going for a swim in the ocean on Jan. 3.

Pop star Dua Lipa donned an aqua blue bikini to enjoy some fun in the sun in Miami on Jan. 4.

Duchess Kate's little brother, James Middleton, took a dip off the coast of St. Jean in St. Barths on Jan. 4.

Taraji P. Henson hung out by the pool at the Nobu Hotel Los Cabos in Cabo San Lucas, Mexico, on Feb. 17.

Simon Cowell showed off his new slim physique on the beach in Bridgetown, Barbados, on Jan. 9.

Cindy Crawford enjoyed a New Year's Day stroll on the beach in Miami on Jan. 1.

Behati Prinsloo soaked up the sun in Cabo on Jan. 12.

A wind-swept Ashlee Simpson hung out on the beach at the adults-only Secrets Cap Cana Resort & Spa in Cap Cana in the Dominican Republic on Jan. 10.

Model Jerry Hall showed off her amazing figure while basking in the sun in Bridgetown, Barbados, on Jan. 5.

Jerry Hall's husband, media magnate Rupert Murdoch, got a helping hand as he left the water while vacationing in Bridgetown, Barbados, on Jan. 6.

DJ-producer Diplo splashed around in the ocean with friends in Tulum, Mexico, on Jan. 5.

Sarah Hyland practiced some ballet moves while vacationing on the beach in Cancun, Mexico, over the New Year's holiday.

Paul McCartney was snapped on the beach during a holiday in St. Barths on Jan. 5.

Vincent Cassel struggled to keep his balance while paddleboarding in Tulum, Mexico, on Jan. 8.

Jimmy Kimmel played with son Billy during a family beach holiday in Tulum, Mexico, on Jan. 1.

Model Alessandra Ambrosio took a dip in the water while on vacation in Punta del Este, Uruguay, on Jan. 9.

Diddy went for a ride on a Jet Ski with a mystery woman while in Miami on Jan. 2. 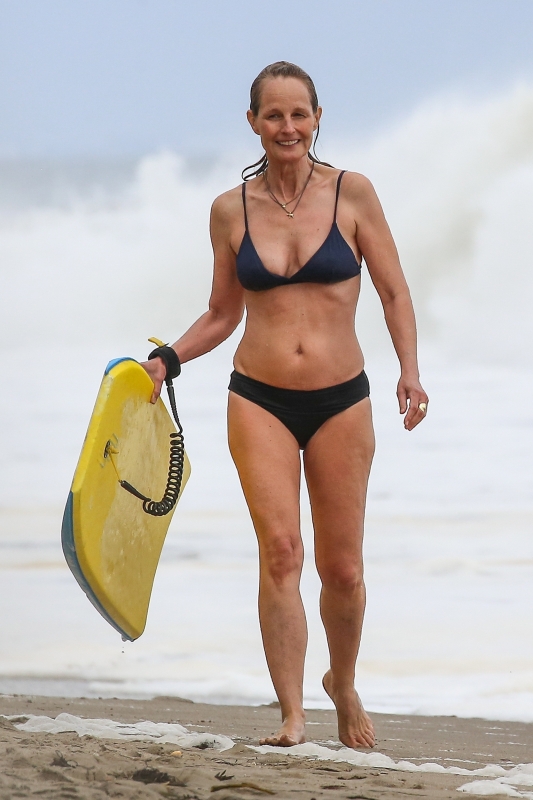