With their wedding plans delayed by the pandemic, Jennifer Lopez and Alex Rodriguez are self-isolating at home together — they're also staying busier than your average quarantined couple. Multiple outlets are reporting the singer and former Yankees star are moving in on a deal to buy an ownership stake in the New York City Mets MLB team. "It's real," a source told Page Six this week of the couple's Mets plans. Both the Post and Variety have separately confirmed A-Rod and J.Lo, whose combined net worth is about $700 million, already have an exec from JPMorgan Chase on retainer to raise money for a bid on the team. Meanwhile, the power couple's been enjoying the occasional at-home pseudo-date, like the joint workout session Alex posted clips from on his Instagram Story on Monday, April 19. The posts showed the lovebirds taking turns filming and encouraging one another as they lifted free weights. "Getting it in!" Alex captioned one clip (via People). As Jennifer recently told Elle, "Everybody's quarantined and the world is upside-down and crazy, so we've gotta make lemonade out of lemons right now, don't we?" The last price for that ownership stake in the Mets, by the way, was listed at $2.6 million, before the deal fell apart. That's some pricey lemonade.

RELATED: All the livestreams and concerts you should check out while social distancing

On Friday, Andie MacDowell and her daughters, Rainey, 30, and Margaret, 25, were reportedly photographed crawling under a gate as they left the Audubon Center at Debs Park in Los Angeles, which is closed as the city observes a "safer at home" order. A rep for the park has since told Page Six there are no plans to "penalize them" for trespassing. But a new report from the Clinton News Record claims Andie's Twitter account appeared to have been deleted after she faced backlash for allegedly failing to stay home with her daughters. As of Tuesday, April 21, it was unclear when the actress's Twitter page was taken down.

RELATED: See which stars are donating to COVID-19 relief efforts

Serena Williams is not here for your Duchess Meghan questions, Naomi Campbell …

When it comes to shutting down questions about a certain duchess-bestie, Serena Williams is as much of a star on the mic as she is on the tennis court, a fact she proved once again this week during an appearance on Naomi Campbell's YouTube show, "No Filterith Naomi." Asked point-blank about Duchess Meghan and Prince Harry's recent relocation to Los Angeles, Serena went "Eternal Sunshine of the Spotless Mind" on the show host. "Are you happy that your girlfriend's moved to America? Meghan Markle," Naomi asked (via Harper's Bazaar). "Don't know what you're talking about, don't know nothing about that," Serena responded immediately. "I mean, they're on the West Coast. It's a big deal!" Naomi continued, pushing for any crumb or tidbit in response. "Never seen her, never heard of her, don't know her," said Serena. And that was that. Serena's perfect shut-down comes amid Meghan and Harry's ongoing battle in and out of court with the British tabloid media. Citing the outlets' regular publication of "distorted" or "false" information and their use of "invasive" tactics for digging up dirt, the Sussexes announced over the weekend they would no longer engage with or corroborate anything published by certain British tabs.

Maya Hawke on Generation X: 'They really f—ed us'

Maya Hawke has a bone to pick with her parents' generation. As the 21-year-old actress and musician tells Nylon in the magazine's new digital issue, she's given up her new digs in New York City and returned to upstate New York to wait out the pandemic with her famous folks, Ethan Hawke and Uma Thurman, and her younger siblings. And it sounds like the downtime is giving the "Stranger Things" star her own, real-life version of "Reality Bites," albeit without the grunge soundtrack and early '90s coffeehouse culture. At one point, the conversation turns to her decision to go into showbiz and the mostly budget-related changes she's noticed, having grown up visiting Ethan and Uma on movie sets. "It's not so glamorous anymore," she says. "There's almost no such thing as a movie star anymore. There can be an appearance of one for a second. Now there's a bajillion actors with a following. It's a lot more everyman." Maya also admitted she has trouble imagining what's next for any industry, given how crazy things have become in the so-called time of COVID. One thing she's sure of, though, is that her folks are at least partly to blame for the burden her generation will have to shoulder once the world reopens. "I was talking to my friend the other day about this and we're just so annoyed at our parents' generation," Maya says. "They had it so easy. They were all just high and driving around in cool, gas-guzzling cars. Destroying our environment … and having no wars, and no plagues and no pandemics. We're in our 20s, we're supposed to be having fun, and doing drugs and partying. But instead … We're going to SoulCycle and trying to outlive our planet. We have a horrible president, and it's just really irritating. They really f—ed us."

Halle Berry subs her son for weights during at-home workouts

"Just keep it together." That's the relatable stay-at-home fitness advice Halle Berry shares in a new essay she penned for Women's Health magazine. The 53-year-old has been focusing on her new digital wellness community, re-spin, in recent weeks, while sharing makeup-free and random funny posts from her own staying-at-home experience in California. When it comes to her workout routine, she tells Women's Health she breaks up her daily exercise into small bouts of "10 minutes here and there with the goal of doing at least 30 total minutes of more formal exercise per day." But even her "more formal exercise" is a bit unconventional, given the circumstances. "I even use my son as workout equipment when we're goofing around. I'll sit in a chair and he'll lay across my feet, and I'll do a few sets of leg extensions," she writes. "As hard as it is to feel so out of my usual routine, I think we all need to remember to be gentle with ourselves right now. This is an odd, stressful time, and we've all had a lot dumped on our plates. You don't have to make big strides or do big things. Just keep it together." Halle continues: "Move when you can and in a way that feels good—or in a way that gets your kids in on the action. Just hang in there. All any of us can do right now is our best."

The world is officially now two steps closer to a "Mean Girls" sequel starring the original cast. Over the weekend, Rachel McAdams checked in with the Heroes of Health: COVID-19 Stream-a-thon, where she was asked if she'd ever want to revisit her Regina George character from Tina Fey's 2004 comedy. Her answer was a resounding "yes." "It would be fun to play Regina George later in her life and see where life took her!" she said, according to Elle. That said, she also admitted any conversation she's had about a sequel to the movie have been "in joking," and said she hopes that after all these years, "Mean Girls" "… has helped girls to be nicer to each other, not the other way around." A few days prior to her appearance on the stream-a-thon, Lindsay Lohan, who played Cady Heron, said on "Lights Out with David Spade" that she's long dreamed of being involved in a sequel, "… with the same cast … Tina [Fey], and the whole crew again, and [Mean Girls director] Mark Waters."

Mr. Big made a big change to his noggin this week. On Tuesday, Chris Noth, aka Carrie Bradshaw's longtime "Sex and the City" beau, showed off a new look on Instagram. "I decided dealing with hair was superfluous during these times of quarantine," the actor, 65, captioned the somber shot. As hundreds of fans and followers weighed in on the cut in the comments, one user's response stood out. "Why did you wait so long???? X" asked Chris' former costar, Sarah Jessica Parker, giving the look her stamp of approval. The sweet response actually marked SJP's second two-thumbs-up moment for Chris in recent months: In an appearance on the "Bradshaw Boys" podcast back in January, the actress and designer, 55, finally revealed who she thought Carrie should have ended up with. Though she gave big props to John Corbett's Aiden, she said, "Ultimately, Carrie should have ended up with Big."

One week after Michael Che announced he wants to cover one months' rent for everyone living in the public housing-operated building where his late grandmother lived, rapper and Cash Money Records founder Birdman posted a similar offer on Instagram. "I would like 2 offer to pay everybody rent for month of May (for those who in need) in residents area of UPTOWN New Orleans where I was born and raised at," he shared this week, adding a shout-out to the St. Thomas public housing development where he grew up and a thank-you to hospital workers. Like Che, whose grandmother died after contracting COVID-19, Birdman called on local officials to help out, as well, tagging New Orleans Mayor LaToya Cantrell and the Housing Authority of New Orleans.

Bruce Willis and Demi Moore aren't the only Hollywood exes quarantining together this month. Susan Sarandon's daughter Eva Amurri has been open about the adjustment period she and her now ex-husband Kylie Martino faced after splitting while she was pregnant with their youngest child. She was similarly candid on Instagram Live this week while speaking with Otherland co-founder and CEO Abigail Cook Stone about "unconventionally isolating" with Kyle amid the COVID-19 crisis. "It's been really interesting. He actually said in an [Instagram] Live for work not that long ago that we sort of jammed a year of therapy into a few weeks of self-isolation because we had to really get on the same page," Eva said, according to People. "So many times we've come up against some conflicts, as you would imagine, and had to work through them." The former couple share 5-week-old son Mateo plus an older son, Major, 3, and daughter, Marlowe, 5. Kyle is now staying in a studio on Eva's property in Connecticut rather than his usual home in New York City, Eva said. "It was either he isolates on his own and doesn't see the kids for who knows how long or we isolate together. It was an obvious choice for the kids' sake and his sake," she explained. "It's been great, surprisingly. It's obviously had its moments." Eva, a lifestyle blogger, and Kyle, an analyst for NBC Sports, mediated their own divorce earlier this year and welcomed Mateo in mid-March.

It's a girl! Joshua Jackson and Jodie Turner-Smith have welcomed their first child together. "Both mother and baby are happy and healthy," reps for the stars jointly told People on Tuesday, April 21. Jodie announced the baby's gender on International Women's Day. She and Josh were first spotted wearing wedding rings last fall. 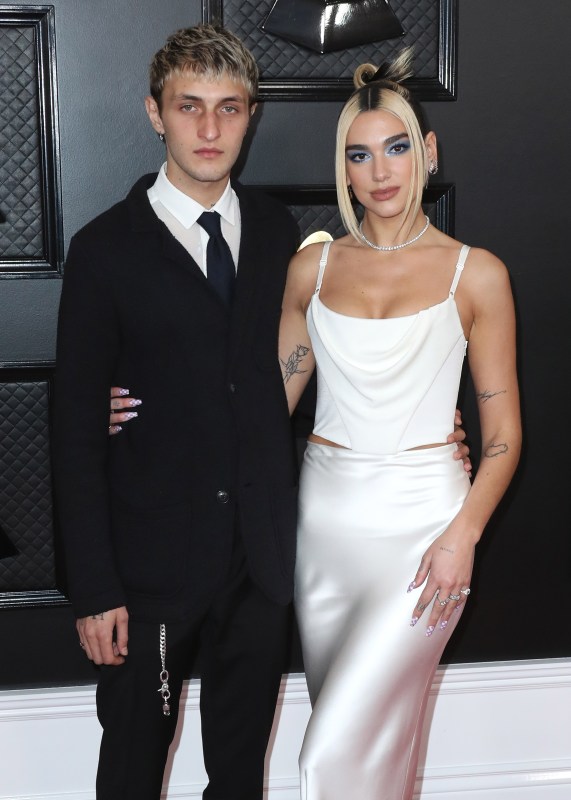 Up Next Grammy noms' loves

Halle Berry's romance with Van Hunt is heating up, plus more news