Dennis Quaid gets candid about his heavy cocaine use

By the time Dennis Quaid went to rehab in 1990, he was using about two grams of cocaine a day. That's one of multiple revelations the actor and musician makes in a new interview with the Sunday Times. Pegged to the recent release of his debut album, "Out of the Box," with his long-running band The Sharks, the wide-ranging piece also delves into the 64-year-old's highly publicized personal life, from the effect his three divorces had on him to his drug use. "I liked coke. I liked it to go out," Dennis admits, adding that he changed his tune in the moment he realized how detrimental his behavior was. "I had one of those white-light experiences where I saw myself being dead and losing everything I had worked for my whole life," he says. "So I put myself in rehab." After a decade of total sobriety, he says he felt comfortable having the occasional drink, telling the magazine, "I started drinking again because alcohol was never my problem. I never liked the feeling of being drunk." Rather, booze was a comedown tool he used to deal with the effects of such heavy cocaine highs. It wasn't long after Dennis got off drugs that his marriage to Meg Ryan fell apart — a split that was so public, he says then-President Bill Clinton actually contacted him from Air Force One because "he wanted to let me know he was thinking of me." These days, Dennis — whose divorce from Kimberly Quaid was settled in April — has happily settled into a romance with model Santa Azuina, with whom he shares a strong connection despite being more than three decades older than her. In addition to promoting his new album, Dennis has multiple new films in the hopper, including the thriller, "Intruder," which hits theaters in April.

Getting serious? Kendall Jenner turns up at Ben Simmons' game for the second time in three days

For someone the Daily Mail reported is "just having fun" with one of the Philadelphia 76ers' stars, Kendall Jenner sure is devoting a lot of time to supporting him from the sidelines. On Sunday, Dec. 2, Kendall sat courtside as her rumored boyfriend, Ben Simmons, fought off the Memphis Grizzlies to win, 103 – 95 in the City of Brotherly Love. It was the second time in three days she caught one of Ben's games, the first being his battle against the Washington Wizards on Friday. Her appearance that night ramped up questions about whether her relationship with Ben could be getting more serious — according to People, she spent much of the game laughing and chatting with Ben's mom, Julie Simmons. Kendall and Ben were first linked in May. Split rumors hit the pair in September but by November, Kendall was back in her courtside seats — smiling as she jokingly booed her sister, Khloe Kardashian's boyfriend, Tristan Thompson, as he and the Cleveland Cavaliers took on Ben and the Sixers.

RELATED: The business of being Kendall Jenner

Kim Kardashian: Kanye West 'can't control what he says when he gets ramped up'

Kanye West's habit of making controversial statements boils down to his tendency to veer into what he's called a "ramped up" state. The rapper and designer, who's been diagnosed with bipolar disorder, has acknowledged that fact before, telling Jimmy Kimmel in August that the interview he gave TMZ in which he said slavery "was a choice" and defended wearing a "MAGA" hat went down the way it did because when his brain goes to that place, "you get these comments that just shoot out." His wife apparently understands the issue — and seemingly has to deal with it on a regular basis. A new teaser for the next edition of "Keeping Up With the Kardashians" shows Kim Kardashian West explaining, "When he gets ramped up, he can't control what he says." The clip was likely shot in the aftermath of Kanye's May TMZ interview, based on the focus of this past weekend's show, which focused largely around Kim trying to figure out if she was up for going back to the City of Light after being robbed there in 2016 to support Virgil Abloh at his first Louis Vuitton runway show as the creative director of the fashion house, according to the Daily Mail. "I don't want to put any pressure on you to go to Paris," Kanye told Kim at one point. "I think just for the culture, for Kim K to show up to the first black designer at [a] Louis Vuitton show, the world would just love to see you there." In a confessional after Kim agrees to go, she tells the camera: "I hope that this trip is so good that I start to remember all the magical things about Paris and why Kanye and I fell in love with it."

Looks like Jenna Dewan's new guy is falling hard for the dancer. Tony winner Steve Kazee, who was first spotted smooching Jenna in late October, left a ridiculously sweet message for her on Instagram. After Jenna posted a shot promoting her new Danskin activewear line in November asking "Have you found your favorite yet?", Steve chimed in with three little words. "Yes. I have," he wrote (via Us Weekly), making us blush vicariously for Jenna. This past spring, the "World of Dance" star announced she and her husband, Channing Tatum, were calling it quits after nine years of marriage. Jenna filed for divorce in October. In November, Us Weekly reported Channing is now dating singer Jessie J.

In October, Page Six caught Bradley Cooper and Irina Shayk sharing what looked like a tense meal. The moment fueled questions about the couple's relationship, but judging from Bradley's demeanor at the Versace pre-fall 2019 fashion show at the American Stock Exchange building in New York City over the weekend, all is well between the actor and model. Bradley was on hand to support Irina as she walked the runway alongside stars including Hailey Baldwin. After the event wrapped, he joined his girlfriend, with whom he shares a daughter, and headed out in a car — with a smile on his face.

At a time when women in Hollywood are speaking out more than ever about the different ways men and women are treated in the entertainment industry, Lady Gaga and Bradley Cooper's take on the classic, "A Star is Born" seems even more poignant to stars like Meryl Streep. As the three-time Oscar winner told Stephen Colbert over the weekend at a benefit for Montclair Film, the movie made her think about the intense physical scrutiny she's endured over the years. "Every woman in this room thinks about her weight, if only it were 10 pounds less. We are so judged by how we look …," she said, according to Page Six. "We inevitably allow ourselves to be the object of 'What should I wear tonight?' 'Is my hair clean?' You think about these things. Men do not think about these things." Meryl went on to admit that like Lady Gaga's character, she was told — and believed — she wouldn't succeed in her chosen field because of her looks. As a young woman, she said she felt becoming "a film star … wasn't even an option …" because of the size of her nose, in particular. "I've just seen 'A Star Is Born,' and I so related to that," she said. On the plus side, she said her hindsight is a bit closer to 20/20: "I'll come upon a movie, and I'm in it, and I'm really young and very beautiful, and I'll think, 'I was so unhappy, I thought my nose was too big, I thought I was fat … What was I thinking?'"

On the heels of his settlement with former adult film star Layla Lace, Drake has put a second lawsuit behind him. The Blast reports Drake has ditched his case against publishing company Hebrew Hustle, which accused him of sampling jazz musician Jimmy Smith on "Pound Cake/Paris Morton Music ," sparking Drake to countersue on grounds the company damaged his brand by using his face on its website. The details of the settlement have not yet revealed actual dollar amounts, but according to the website, Drake came out ahead with a payout from Hebrew Hustle. He previously denied all allegations he stole any music for his track.

Congratulations are in order for Scooter Braun and his wife, Yael Cohen Braun, who welcomed their first daughter on Saturday, Dec. 1, according to Us Weekly. "She came on her own schedule and her own time. Saturday morning (8 days late) we became 5…. and we wouldn't want it any other way," Scooter, who manages Justin Bieber and Ariana Grande, posted on Instagram on Monday. "Welcome to the party Hart Violet Braun! Daddy will always be here! And mommy… Mommy is a rockstar!! We love you! #sheownsme," he added. Yael made an announcement, too, sharing a photo from her hospital bed alongside the caption, "We're so in love. Hart Violet Braun," The couple are also parents to sons Jagger and Levi.

Gwen Stefani gets cozy with Blake Shelton at One Love Malibu

Love still wins for Gwen Stefani and Blake Shelton. The lovebords stopped by the One Love Malibu concert and fundraiser over the weekend to help support victims of the Woolsey Fire. Gwen — who was among the performers, along with Katy Perry, Robin Thicke, Chris Martin and others — brought her son, Apollo, along, as well. The 4-year-old even got onstage to help his mom sing at one point, according to the Daily Mail.

Eminem still has no problem doing whatever it takes to win a freestyle battle. In a new video on Instagram, Em warns viewers that in such settings, "the objective is to destroy … your opponent by saying anything and everything … to get a reaction from the crowd." Shot at St. Andrew's Hall in his native Detroit, the video goes on to show Em dropping a slew of famous names — and not all of them are mentioned in positive terms. He spends a number of bars talking about the Manchester bombing at Ariana Grande's concert last year, rapping: "Squashed in-between a brainwashing machine / Like an Islamic regime, a jihadist extreme radical Suicide bomber that's seeing / Ariana Grande sing her last song of the evening / And as the audience from the damn concert is leaving / Detonates the device strapped to his abdominal region / I'm not gonna finish that for obvious reasons," according to E! News. There's a reference to Jada Pinkett, too ("Told this chick she's hot as Jada Pinkett / And just stared 'til I made her think it"), as well as explicit content about Reese Witherspoon and a "Christina" most outlets assume is Christina Aguilera. Em takes on a certain pop star-slash-newlywed, as well. "Justin Bieber in a Catholic school," he raps, "Selling dust and reefer when your back is to him." 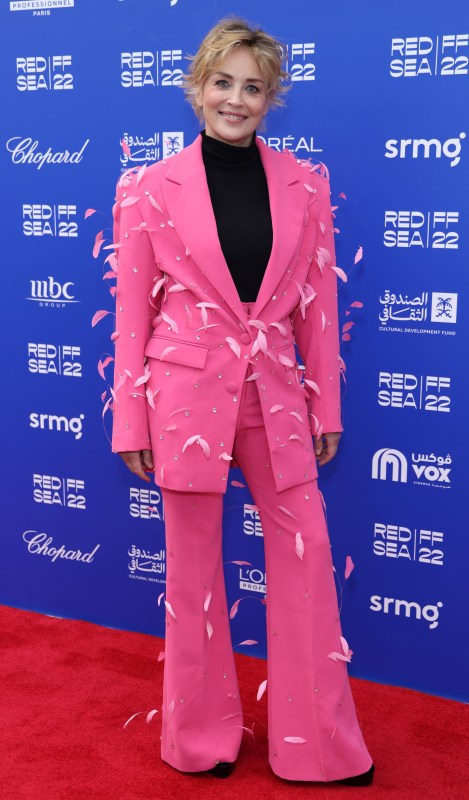