Halloween is almost upon us! In honor of the spookiest of seasons, Wonderwall.com is counting down our favorite films to watch during the lead-up to All Hallows' Eve, silly and scary alike (including the classic slasher flick "Halloween" starring Jamie Lee Curtis). Keep reading to see where it lands on our list, plus see which other movies you should add to your queue…

No. 25: The rebooted "Ghostbusters"

Kate McKinnon, Melissa McCarthy, Kristen Wiig and Leslie Jones starred as the titular team of women who take on New York City's ghost problem in the rebooted horror-comedy "Ghostbusters," which debuted in July 2016, making this flick one of the newest additions to our list.

Want your scares to feel a little more homemade? 1999's "The Blair Witch Project" was a massive hit, largely due to its very real nature. By embracing found footage ahead of the age of social media, this horrific thriller takes you on a wild ride that original audiences weren't sure was real or fake.

Jack Black starred as writer R.L. Stine in the 2015 horror-comedy "Goosebumps," in which several of the most memorable creations from the real-life author's titular series of children's books come to life to terrorize his small town in Delaware.

Of the stop-motion family-horror films to hit the box office since "The Nightmare Before Christmas" debuted, "ParaNorman" is by far the most underrated. The sometimes-dark 2012 comedy, which earned an Oscar nomination for best animated film, chronicles a boy who can talk to the dead and his misadventures when his small town is overrun by zombies. The strong voice cast includes Anna Kendrick, Leslie Mann, Casey Affleck and Christopher Mintz-Plasse.

Johnny Depp starred as police constable Ichabod Crane and Christina Ricci (who's appeared in several of our favorite Halloween films, as you'll see!) portrayed the beautiful Katrina Van Tassel in the 1999 horror film "Sleepy Hollow," which was directed by Tim Burton (another mainstay on our list of the season's best movies!). The haunting film won the Academy Award for best set direction in 2000 and earned two more Oscar nominations that year.

Halloween is the perfect time to bust out the horror classics. And what scary movie is more famous than "The Exorcist"? The terrifying 1983 film features the perfect elements for a spooky time — demonic possession in the form of a creepy little girl. What more could you ask for?

Kristy Swanson starred as the titular heroine in the 1992 horror-comedy "Buffy the Vampire Slayer," in which Luke Perry appeared as her mortal love interest. The original film isn't necessarily anything to write home about, but it launched the beloved '90s TV series of the same name — and for that, we are eternally grateful!

Devon Sawa starred as stoner-slacker Anton, a guy who accidentally kills his parents and two best friends when his hand is possessed by the devil, in the cult 1999 horror-comedy "Idle Hands." Jessica Alba, Seth Green and Vivica A. Fox also appeared in the film, which culminates with Anton's amputated hand going on a killing spree at his high school's Halloween dance.

Neve Campbell, Courteney Cox, David Arquette, Rose McGowan, Liev Schreiber, Skeet Ulrich, Matthew Lillard, Jamie Kennedy and Drew Barrymore starred in the 1996 slasher film "Scream," which was inspired by writer Kevin Williamson's passion for horror movies like "Halloween." In "Scream," there are several nods to the seminal 1978 horror film, which Sydney and her friends even watch during the house party at the end of the movie!

The Disney Channel launched the "Halloweentown" franchise — which chronicles a family of witches in the titular supernatural community — in 1998. The made-for-TV movie has since spawned three sequels, which are all equally worthy of re-watching this October!

It's not set during Halloween, and, despite its title, it's not a horror film — but October just wouldn't be the same without "The Rocky Horror Picture Show." Tim Curry starred as Dr. Frank N. Furter, a mad scientist and the leader of a band of aliens from the planet Transsexual in the galaxy of Transylvania in the 1975 cult-classic musical, which got a made-for-TV reboot on FOX in October 2016.

Celebrate the late, great Gene Wilder by screening "Young Frankenstein," the Oscar-nominated 1974 Mel Brooks comedy in which he starred. The beloved actor played Dr. Frederick Frankenstein, the grandson of the infamous mad scientist, and "Everybody Loves Raymond" star Peter Boyle portrayed his creation.

If you make it to November without watching the 1991 live-action adaptation of "The Addams Family" at least once, you messed up! The ensemble comedy, which features Anjelica Huston, Christopher Lloyd and Christina Ricci, even earned an Oscar nomination for best costume design.

Christina Ricci starred as Kat Harvey, the daughter of a paranormal therapist who befriends the titular friendly ghost, in the 1995 family comedy "Casper." The film culminates with Kat and a temporarily corporeal Casper (played in his human form by a young Devon Sawa) sharing a dance at Kat's Halloween party.

No. 10: The original "Ghostbusters"

Harold Ramis, Bill Murray and Dan Aykroyd starred as a trio of parapsychology professors who team up to rid New York City of the undead in the original 1984 "Ghostbusters," which earned two Oscar nominations.

Michael Keaton starred as the titular ghost in the 1988 supernatural comedy "Beetlejuice," which won an Oscar for best makeup. Though the Tim Burton-directed film (which also starred Winona Ryder, Alec Baldwin and Geena Davis) isn't set during Halloween, it's the perfect combination of creepy and comedic, which makes it a must-watch during October.

There's a reason why you can still watch "It's the Great Pumpkin, Charlie Brown" on TV every October even though it's been more than 50 years since the animated television special debuted in 1966: It's really, really good! The movie, which follows the Peanuts gang on Halloween, earned three Emmy nominations back in the day.

The grossly underrated 2007 horror anthology "Trick 'r Treat" has become a cult classic — and a true hit with Halloween fans — over the years. The film follows several characters (the ensemble cast includes Anna Paquin, Leslie Bibb and Brian Cox) over the course of one Halloween in an unnamed small town.

"A Nightmare On Elm Street" is a classic horror movie that will haunt your dreams (literally). The 1984 slasher film follows four teenagers who are murdered in their dreams — which also ends their lives IRL — by serial killer Freddy Krueger. Critics and audiences loved the flick for its exploration of reality vs. imagination, and the movie has grown into a franchise with nine slasher films, a television series, novels and comic books.

The "It" remake might be relatively new (it was released in 2017), but it was so amazingly scary that it comes in pretty high on this list. Set in the summer of 1989, "It" tells the story of seven children who are terrorized by a being that takes the shape of whatever scares them most — often appearing as a terrifying clown. The horror film was a huge box-office success, grossing $700 million worldwide. "It" is now the highest grossing horror film of all time as well as the fourth-highest grossing R-rated film and the most profitable horror film ever.

Coming in at No. 4 is the 1980 classic "The Shining." The horror flick stars Jack Nicholson as Jack Torrance, a writer who becomes insane due to a hotel's supernatural forces, which places his wife and son in grave danger. "The Shining" is regarded as one of the best horror films of all time (legendary director Martin Scorsese ranked it at No. 1) and its influence on pop culture continues to this day.

No. 3: "The Nightmare Before Christmas"

We know, we know: Christmas is in the title. But any true fan will agree that Tim Burton's Oscar-nominated 1993 stop-motion musical "The Nightmare Before Christmas" is, in fact, a Halloween movie.

Jamie Lee Curtis made her feature-film debut as babysitter Laurie Strode, who's terrorized by serial killer Michael Myers on All Hallows' Eve, in the seminal 1978 slasher flick "Halloween."

Sarah Jessica Parker, Bette Midler and Kathy Najimy starred as the Sanderson sisters — a trio of resurrected witches seeking to restore their youth by sucking the souls out of children on All Hallows' Eve in Salem, Massachusetts — in the beloved, sometimes-scary 1993 family comedy "Hocus Pocus." 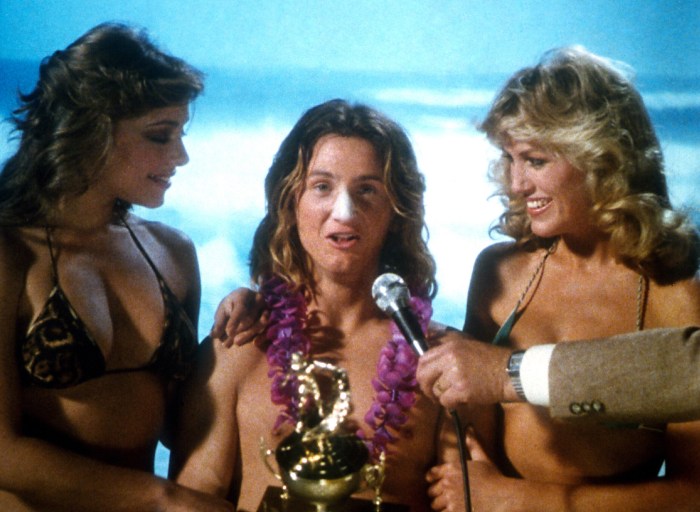