On May 6, 2019, the Metropolitan Museum of Art will host its annual Met Gala, more formally known as the Costume Institute Gala — aka fashion's biggest night. Wonderwall.com is taking stock of the best accessories attendees have added to their high-fashion looks at the big event over the years… starting with the couture gold swirl headpiece that Rihanna wore to complement her amazing yellow and gold Guo Pei look at the 2015 Met Gala. The headpiece, which looked more like a crown, was encrusted with rubies and diamonds that mimicked the intricate design of her dress and offset her gold choker. Keep reading to see more of the greatest accessory moments from Met Galas past…

RELATED: Wackiest fashions and wardrobe malfunctions from Met Galas past

With a theme like "Heavenly Bodies: Fashion and the Catholic Imagination," the options for out-there accessories at the 2018 Met Gala were endless. Rihanna certainly delivered once again, sporting this papal mitre designed by Stephen Jones covered in the same embellished fabric as her Maison Margiela dress.

Fashion-forward star Mary-Kate Olsen was rocking a major Bohemian look at the 2017 Met Gala. To accessorize her ivory antique lace gown, Mary-Kate donned a chain headpiece that was actually woven into her tousled hair plus layers of amber and jade jewelry with embossed metal medallions. She even rocked a pair of carved drop earrings and jet-black underwear to contrast with her dress.

Beyonce's flaming black-and-orange Givenchy gown at the 2013 Met Gala was fierce enough on its own, but she took the look up another notch when she paired it with long black gloves and thigh-high matching Givenchy boots. The footwear was designed to perfectly complement her gown, making it hard to tell where it ended and her gorgeous dress began.

Lupita Nyong'o knows fashion's supposed to be fun. She accessorized her custom Prada flapper dress at the 2014 Met Gala with a vintage Cartier choker worn as a headband. The feather and jewel-embellished look didn't need much to make it pop, so Lupita expertly added little more — just an emerald-hued clutch and green peep-toe heels with jewel embellishments.

Sarah Jessica Parker caused quite a stir at the 2013 Met Gala when she arrived in a black-and-gold Giles Deacon gown with thigh-high Christian Louboutin boots and this eye-catching black-and-gold Mohawk headpiece designed by Philip Treacy. While the headgear looked like it weighed a ton, SJP confirmed it was actually "light as a feather." The same can't be said for those hefty diamonds around her neck.

Proving she'll always give us something to talk about, Sarah Jessica Parker arrived at the 2016 Met Gala wearing this white Monse capri suit inspired by the Broadway musical "Hamilton." What pulled the look together were her embellished blue satin heels and a gorgeous blue-and-white Fred Leighton cameo necklace. While SJP was later criticized for her look and for not following the night's theme (man vs. machine), she defended it, saying, "Perhaps you weren't aware of the technology used in the details and embellishments of the design. Or perhaps you simply didn't like what I wore, which is completely fine but you can't accuse me of not paying close attention and adhering to the theme." We think she looked stunning.

Jennifer Connelly's 2016 Met Gala look was a lesson in contrasts. The actress donned a sexy asymmetrical tea-length galaxy-inspired Louis Vuitton dress with edgy black combat boots and a black clutch (also by the designer). While heels might have been a more traditional way to accessorize the dress, we love how casual (and, let's be real, comfortable) Jennifer made it all look.

Although Jennifer Lopez's best accessory at the 2017 Met Gala was hunky new boyfriend Alex Rodriguez, the 150 carats of Harry Winston diamonds she wore with her powder-blue Valentino gown weren't so shabby either. Looking like a glittering goddess, J.Lo wore vintage triple diamond hoops and diamond bracelets all set in platinum. Keeping it shiny, the singer-actress added a silver clutch with a giant crystal clasp.

Blake Lively shined in an intricate Atelier Versace creation at the 2018 Met Gala, and when it came time to add jewelry, she called in Lorraine Schwartz. The jeweler outfitted her in more than $2 million worth of gems — including this custom-made halo housing more than 100 carats of champagne diamonds. Blake also sported some killer earrings made up of 30-carat emeralds and diamonds.

Cameron Diaz stood out in a fuchsia gown at the 2007 Met Gala, but it was her jewelry selection that really turned heads! She accessorized with vibrant turquoise earrings and a matching necklace.

Rosie Huntington-Whiteley's earrings at the 2014 Met Gala have us wide-eyed and envious. Complementing her leopard-striped, long-sleeved Balmain cocktail dress were these supersized gold bamboo hoops (also from Balmain). The earrings added a safari vibe and perfectly accentuated the bamboo detailing down the arms of her dress.

At the 2017 Met Gala, Kerry Washington rocked a structured black-and-silver Michael Kors gown with a severe bob and a safety-pin choker. The interesting necklace (also designed by Michael Kors) was the only jewelry Kerry wore (aside from her wedding ring) and featured hundreds of tiny diamonds bordering actual safety pins, giving her an edgy, almost unfinished appeal that fit perfectly with the night's theme, "Art of the In-Between."

Katy Perry's avant-garde look at the 2017 Met Gala was courtesy of designer John Galliano for Maison Margiela Artisanal. The flaming red gown was given an intriguing boost by its matching veil adorned with swirling metal, dangling rhinestones and graffiti-inspired art. Katy paired the look with a simple gold hoop nose ring and Lorraine Schwartz diamond earrings.

Although Chrissy Teigen's subtle, sparkling all-black St. John Knits gown at the 2015 Met Gala was glam enough, her accessory game was on-point and worthy of some praise. From her silver Italian leather belt and Judith Leiber fan clutch to her beaded jade drop earrings and the gorgeous purple orchid in her hair, Chrissy was one of the most beautifully accessorized stars of the night.

The Met Gala is one of the only places where headpieces are a totally appropriate accessory, and Priyanka Chopra donned a beautiful one in 2018 that took artisans 250 hours to make. It was by Ralph Lauren, who also made her gown, and was comprised of red Swarovski crystals and gold beading.

Lady Gaga's 2016 Met Gala look was one for the books. The fashion-forward singer wore a leotard with a jacket made of circuit boards by Versace. On its own, the look was brilliant based on the theme of man vs. machine, but because she's Gaga, she also added the tallest lace-up platform heels we've ever seen and some seriously dazzling diamonds from Lorraine Schwartz (including an amazing bolt diamond ring). Of course, her big '80s hair pulled the entire outfit together.

Headpieces were everywhere at the 2018 Met Gala, but none were as intricate as Sarah Jessica Parker's! The star wore a reliquary-inspired piece that featured a towering gold design embellished with jewels and a full nativity scene — perfectly on-point for the "Heavenly Bodies: Fashion and the Catholic Imagination" theme.

At the 2017 Met Gala, Rihanna stunned in this incredible ruffled floral Comme des Garçons dress. RiRi paired it with killer red thigh-high sandals from DSquared2. The singer and fashionista said the dress was easy to slip on but it took her an entire hour to get the sandals on and laced up. Finishing the look, Rihanna wore black tourmaline earrings and a chunky diamond bracelet from her very own Rihanna Loves Chopard jewelry collection.

At the 2016 Met Gala, Kate Bosworth looked like royalty in an ornate bedazzled gown with a matching tiara from Dolce & Gabbana. As if she wasn't sparkly enough, the actress added a touch of sunlight with canary diamond earrings.

The best accessories aren't always jewels! Case in point: Jasmine Sanders' unexpected addition at the 2018 Met Gala. The Instagram star wore her hair in a super-long braid that was adorned with dozens of tiny red roses. Not only was this touch gorgeous, but it also adhered to that year's theme, "Heavenly Bodies: Fashion and the Catholic Imagination," since roses are a strong Marian symbol within Catholicism.

Diddy's girlfriend, "Me & U" singer Cassie, brought the drama to the 2017 Met Gala red carpet. Along with her sexy black Christian Louboutin gown that featured a long, frilly train, Cassie donned ear cuffs from Rinaldy A. Yunardi that perfectly matched her boyfriend's sunburst-patterned cape.

At the 2017 Met Gala, Haley Bennett looked like the Roman goddess Flora personified in this flowery Dolce & Gabbana gown with a matching floral headpiece. Pairing the ethereal garden look with soft, dewy makeup and Namikawa jewelry including diamond rings and gold drop earrings, Haley looked like everything she touched would turn into spring.

Ciara's 2016 Met Gala look made the most of some simple yet perfect accessories. The singer wore a body-hugging custom H&M gown dripping in Swarovski crystals paired with nothing but super-high heels, her wedding ring and silver hair paint.

Taylor Swift's rock 'n' roll look at the 2016 Met Gala was courtesy (top to bottom) of Louis Vuitton. Her custom metallic dress was accessorized with lace-up gladiator heels and a dark statement lip that offset her platinum-blonde bob.

In 2006, Jennifer Lopez accessorized her pale pink Versace gown with some serious statement earrings made up of gems in complementary pink hues in various oval and circular shapes.

In 2014, Selena Gomez looked elegant on the Met Gala red carpet in a plum Diane Von Furstenberg gown and geometric silver chandelier earrings from Lorraine Schwartz. The tiny triangles were laden with sparkling diamonds and added a touch of brilliance to Selena's classic look.

Jennifer Connelly was the face of Balenciaga back in 2008, so it was no surprise that the star donned a look by the designer at that year's Met Gala. Completing her ensemble? This stunning necklace featuring diamonds and gemstones in a myriad of shapes and sizes, resulting in one of the most unique pieces on the carpet that year.

Though her dress was nothing to write home about that year, Jessica Alba's 2009 Met Gala accessories were on-point. She wore Van Cleef & Arpels' stunning Cotillon earrings comprised of 51.08 carats of cabochon drop Zambian emeralds and diamonds.

Back at the 2010 Met Gala, Sarah Jessica Parker accessorized her champagne-hued Halston gown with a panoply of incredible vintage diamond bracelets from Fred Leighton. Another notable accessory the star wore that night? An enormous bow that matched the fabric of her dress, which added a whimsical feel to her look (and would have definitely been Carrie Bradshaw-approved!).

Can we talk about British model Adwoa Aboah's accessory brilliance at the 2017 Met Gala? Wearing an ivory gown created by up-and-coming designer Conner Ives (who conceptualized the dress for an assignment at his design school, Central Saint Martins), Adwoa paired the look with seriously hot jewel-studded magenta heels and a gigantic, sparkly ear cuff with a dangling chain, which was also designed by Conner from individual jewelry pieces he found in a London market. To add a little pop of color, Adwoa also decorated her digits with rings from the Astley Clarke Astronomy collection. 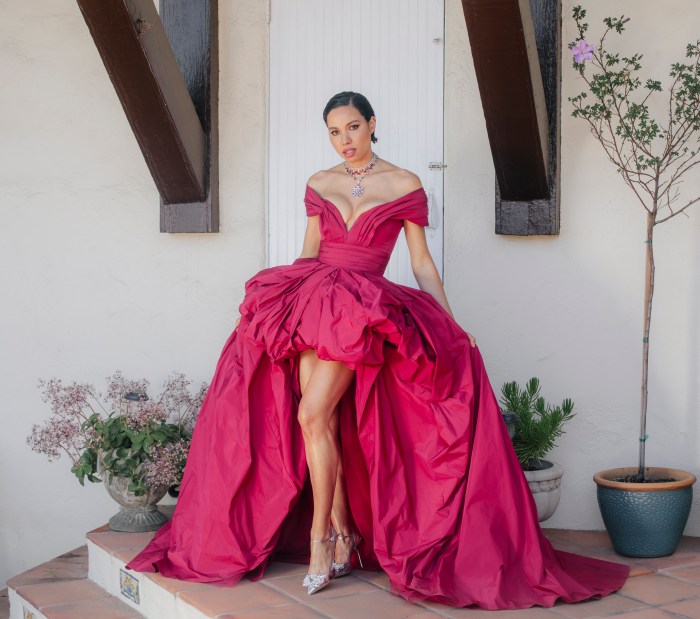 Up Next April's Best and Worst

Kacey Musgraves embraces new doctor boyfriend while waiting for an Uber, plus more stars smooching, hugging and cuddling in public this year