The American Music Awards bring out the best in music each year. And along with that come the buzzworthy moments — the performances, the fashion, the speeches, the controversies and more. As we gear up for the Nov. 24, 2019, telecast of the 47th Annual AMAs, Wonderwall.com is looking back at some of the most talked-about moments over the years. We're kicking off our list with perhaps the most memorable red carpet fashion moment of all time: Britney Spears and Justin Timberlake's coordinated denim outfits from 2001. Justin has since implied he regretted the look, telling Australia's "The Project" in 2016, "If you wear denim-on-denim, it will get documented."

The 1996 American Music Awards delivered a big surprise when it came time to hand out the artist of the year trophy. That year, it went to Garth Brooks, who attended the ceremony with then-wife Sandy Mahl (seen here). Audiences were shocked when the country music superstar, who also won favorite country male artist and favorite country album that year, stepped on stage and said he couldn't accept the artist of the year prize. He walked off, leaving the award on the podium. The reason? He believed he didn't deserve it and that it should have gone to Hootie and the Blowfish.

In 1986, Michael Jackson and Lionel Richie wrote the charity song "We Are the World," recorded it with a number of superstars and donated the proceeds to help eradicate hunger in Ethiopia. At the show, Diana Ross invited Michael, Lionel and anyone else in the audience who sang on the recording to perform, but even more artists than that wanted to join in, including Janet Jackson, Whitney Houston and Elizabeth Taylor.

Contrary to popular belief, the 2009 MTV Video Music Awards incident involving Taylor Swift actually wasn't Kanye West's first major award show outburst. Back at the 2004 American Music Awards, the rapper was up for favorite breakthrough artist but lost to country singer Gretchen Wilson. Needless to say, he didn't take the loss too well. He stormed out after the winner was announced and later told The Associated Press, "I was definitely robbed. I was the best new artist this year."

At the 2004 show, the late Anna Nicole Smith introduced Kanye West, slurring her speech through the whole thing, leaving people worried about her health and sanity as she said things like "Do you like my body?" Ten years later, ex Larry Birkhead discussed the appearance on "The Wendy Williams Show," explaining, "Anna had a lot of health issues due to her breast enhancement surgery… she had back pain a lot, she had chronic pain, she had seizures. The night before [the AMAs], she suffered two seizures, and I tried to get her not to do that show — begged her — but she said no." He added that she took something from a doctor to stay awake and help with her nerves — she had some shilling to do because of her job as a weight-loss brand spokesperson at the time. "When she went out [on stage, the company] were like 'you need to pitch this product,' so she was like, 'like my body?' and pointing to her necklace… which was shaped like a diet pill."

Miley Cyrus closed out the 2013 American Music Awards in a bizarre way that only she could pull off. The then-21-year-old pop star sang "Wrecking Ball" in a tight two-piece cat-print outfit with an image of a giant kitten behind her — a feline that cried tears of diamonds along with exploding planets and stars.

Beyonce's simple performance of "Single Ladies" in 2008 remains one of the best AMA spectacles ever. With a pre-"Glee" Heather Morris and one other dancer by her side , Queen Bey did a gimmick-free, empowering performance that perfectly matched the feeling of the song.

At the 21st AMAs, Whitney Houston took home a whopping eight awards for her work on the soundtrack to "The Bodyguard" and her "I Will Always Love You" single. When she won the night's award of merit, she brought up a tissue to dab her tears away and thanked God, husband Bobby Brown and toddler daughter Bobbi Kristina, who sat on Dad's lap with a bottle as Mom gave her speech.

In 2009, Adam Lambert sparked controversy when he delivered a provocative performance that included simulating oral sex with male and female dancers and kissing a male band member while singing "For Your Entertainment." After the show, the "American Idol" alum told Rolling Stone, "It's a shame because I think that there's a double standard going on in the entertainment community right now. Female performers have been doing this for years — pushing the envelope about sexuality — and the minute a man does it, everybody freaks out. We're in 2009; it's time to take risks, be a little more brave, time to open people's eyes, and if it offends them, then maybe I'm not for them."

In 2003, Eminem skipped the show but still ended up taking home four awards. His "8 Mile" co-star Mekhi Phifer accepted the favorite hip-hop/R&B artist award for him and called the rapper on his flip phone as he accepted it. "Hey y'all, this is Eminem on the phone," he told the audience from the podium.

In 2009, Lady Gaga sang both "Speechless" and "Bad Romance" at the AMAs. As was par for the course then, Gaga wore a bizarre bone-embellished outfit and broke a glass box with a piano inside with her mic stand as she transitioned from one song to another. The violent move seemingly surprised the audience, which watched as glass dangerously flew around the singer before she climbed inside.

In 2010, a 16-year-old Justin Bieber became the youngest person to win the coveted favorite artist prize. "I'm from the smallest town in the world of, like, 30,000 people," he told the crowd. "I never thought this was possible." After his win, Beliebers Katy Perry and Russell Brand showed off their love and pride for Justin by hugging and kissing him in the audience.

"#BlankSpace performance tonight on the #AMAs!!!!!!! It's gonna be crazy. No like, actually crazy," Taylor Swift tweeted before she opened up the 2014 American Music Awards. It was the first time she ever sang the song on television and her performance mirrored the track's epic music video (complete with hot-model dancers!).

In 2012, Eric Stonestreet presented Taylor Swift with the best country music artist award at the show and mocked her classic I'm-so-shocked-I-won face. "Taylor, have you ever won an award before?" the "Modern Family" star asked her.

Pink's "Try" performance at the 2012 AMAs goes down as one of the most incredible ever. During her sensual acrobatic performance, she balanced on her dance partner's back while covered in colored pigment, did splits and sang her heart out in a dramatic and wildly memorable production.

MC Hammer and Psy teamed up to perform "Gangnam Style" and "Too Legit to Quit" in 2012. "[Manager] Scooter Braun connected us, and [when] I spoke with Psy, I knew right away that he is a good guy. I like working with good people … I loved doing it and we had a great time together," MC Hammer told CNN. "Psy is fantastic. He's shifted the planet. He's got the whole world dancing. And it's a rarity in this world. Only four people made that happen in history — James Brown, Michael Jackson, yours truly and Psy. "

For the 2013 show, a new honor was created: the Icon Award, which was presented to Rihanna by her mom, Monica Braithwaite. "Rihanna, I'm so proud of you tonight," she said, getting emotional. "I know the journey in your career has not always been an easy one, but tonight I applaud you and admire you for being so strong and so positive and so humble and so focused. It's amazing how you always manage to take good from all your experiences. I'm so blessed to be a part of this historic moment. I just want to say how proud I am to present to you the first-ever AMA Icon Award."

In 1995, Madonna and Babyface performed their song "Take a Bow" for the first and only time together. "I was nervous as hell," Babyface later told Billboard of the performance. "But you couldn't actually see my legs shaking under the suit. When we finished, she told me she had never been that nervous before. That was crazy to me — I was thinking, 'You're Madonna, you're on stage all the time!'"

At the second AMAs in 1975, the late Michael Jackson, then 17, and Janet Jackson, then 9, adorably presented together. Michael introduced his sister, calling her "beautiful, talented" and "charming" before she strutted on stage in a boa, then met her with a kiss on the forehead at the podium. Michael was already an AMAs expert, having hosted alongside Donny Osmond, Rodney Allen Rippy and Ricky Segall the first year.

To celebrate the 20th anniversary of "Clueless," stars Alicia Silverstone and Jeremy Sisto introduced Gwen Stefani's performance at the 2015 AMAs. "One of the many, many great things in the movie was this young, up-and-coming band No Doubt, and their song 'Just a Girl,'" Jeremy, who played Elton, said just before the No Doubt frontwoman took the stage to sing her solo breakup song "Used To Love You."

At the 2016 AMAs, Selena Gomez won the favorite female pop/rock artist prize during what was her first appearance since taking a break from work to enter treatment and focus on her mental health. "I think it's safe to say that all of you know my life whether I like it or not. I had to stop because I had everything and I was absolutely broken inside. I kept it all together enough to where I would never let you down but I kept it too much together to where I let myself down," she said in an emotional speech. "All I can say from the bottom of my heart is I am so grateful that I have the opportunity to be able to share what I love every single day with people that I love. I have to say thank you so much to my fans because you guys are so damn loyal and I don't know what I did to deserve you. If you are broken you do not have to stay broken. If that's anything whether you respect me or not that's one thing you should know about me. I care about people. Thank you so much for this. This is for you."

It was a "Degrassi: The Next Generation" reunion when Nina Dobrev presented Drake with favorite rap/hip-hop album in 2016. "Thank you very much! Me and Nina were on 'Degrassi' together, by the way," he started his acceptance speech before turning to the "Vampire Diaries" actress. "We've come a long way, you know. Congratulations on all your success!" 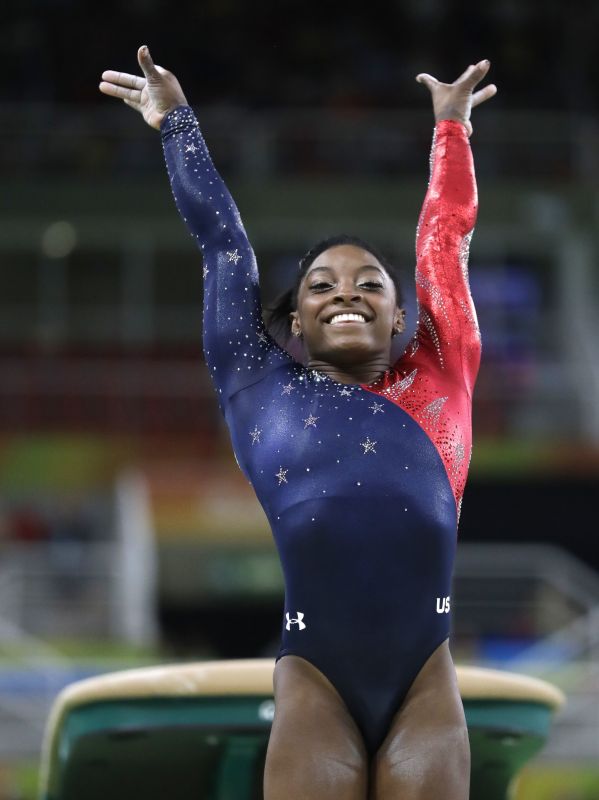