Jennifer Lopez and Alex Rodriguez seem to be on the fast track to a long future together. Since they began dating in early 2017, the two have been inseparable and haven't shied away from gushing about one another to the media or on social media. There's no telling where this romance will head, but it certainly looks like wedding bells are in their future (even their friends say so). From the selfies to the vacations to the magazine covers and the #ManCrushMondays, keep reading for a fun recap of J-Rod's whirlwind romance for the year…

It was in early March 2017 that celebrity news publications blasted the headlines: Jennifer Lopez is secretly dating Alex Rodriguez. Turns out, they were correct. On March 8, Page Six reported that J.Lo and the former Yankees slugger "have been seeing each other for a few months — and were together in L.A. this past weekend." A source added, "They are really into each other because they have so much in common — from their Latin roots to their love of New York and their kids."

Once news got out that Jennifer Lopez and Alex Rodriguez were dating, the couple didn't really hide it. In fact, she was with her beau lending support as he arrived at the New York Yankees vs. Baltimore Orioles spring training game on March 18, 2017 (he's a special adviser to his former team). Jennifer reportedly donned a Yankees cap with a long duster coat, jeans and heels while A-Rod was in work boots and Yankees gear. The couple that coordinates clothes together stays together.

How about a trip to paradise? Just a few days after it was reported that Jennifer Lopez and Alex Rodriguez were dating, they jetted off to the Bahamas in a private jet for a romantic getaway in March 2017. "A-Rod has always been taken with the beauty and personality of Jennifer Lopez," a source told People magazine at the time. "She is his dream girl."

In late March 2017, Alex Rodriguez finally confirmed that he was dating the superstar singer. "We're having a great time, she's an amazing, amazing girl, and one of the smartest human beings I've ever met and also an incredible mother," he gushed about Jennifer Lopez during a March 31 appearance on "The View."

Very quickly, Jennifer Lopez was a hit with Alex Rodriguez's family, and vice versa. On March 17, 2017, J.Lo posted selfies with Alex's sister, Miami luxury realtor Susy Dunand. Susy shared two smiley Instagram photos with Jennifer that same day, captioning one, "Simply sweet!!!" and the other, "Any given Friday!" adding the hashtag #miscuñis, which is a Spanish term for sister-in-law. Alex's daughters are big fans of J.Lo too. On Aug. 21, he posted a photo of his girls — Natasha and Ella — at dinner with Jennifer during a weekend getaway to the Hamptons. He's also already met J.Lo's mom, who gave her approval, and has spent time with her twins.

Friends of Jennifer Lopez and Alex Rodriguez knew this romance was something special early on. "All his friends can tell he really likes J.Lo [but] in the beginning they thought this may just be a fling," a source told E! News in March 2017. "Friends are slowly thinking this may actually be a great match. He calls J.Lo his lady. He would wife her up in a heartbeat… She is different than other people he's dated."

Jennifer Lopez couldn't stop gushing about her man while speaking to Ellen DeGeneres in April 2017. While visiting Ellen's talk show, she actually shared the story of how their romance came to be (they'd first met years prior). J.Lo explained that she saw Alex Rodriguez at a restaurant in Los Angeles. "For some reason, I just felt like tapping him on the shoulder," she said. While chatting, he realized he had her number. After a some texting, they went to dinner. "I don't remember what we had for dinner, but we had a nice dinner," she told Ellen. That was it though. "Mama don't sleep over on the first date," she joked.

It was only April, but Alex Rodriguez and Jennifer Lopez were talking forever… as in forever together! Us Weekly quoted a source on April 5, 2017, as saying, "They've been talking about the future and, of course, marriage has come up. They aren't making wedding plans, but they have been talking about their lives… She hasn't felt this way about anyone in a long time."

Jennifer Lopez and Alex Rodriguez made their red carpet debut on May 1 when they attended the 2017 Met Gala together. They also became Instagram official that day when J.Lo posted a pic of them en route to the gala, calling A-Rod, "my macho bello…," which translates to "my handsome man." A few weeks after that, she was calling him her "Man Crush Monday."

Alex Rodriguez has been extremely supportive of Jennifer Lopez's work commitments since they started dating. Case in point? He's been a near-constant presence on the New York set of her cop drama, "Shades of Blue," where they were seen taking selfies together on Aug. 24, 2017. Say cheese!

Think Jennifer Lopez is happy with Alex Rodriguez? Let her tell you. "I'm in a good relationship. I feel like I can say that for the first time — I don't know — maybe ever," she told HOLA magazine's October/November 2017 issue. "And not that I didn't have great relationships full of love and adventure, but this is the first relationship I've been where I feel like we really make each other better. We complement each other, and there's really pure, true love. Just wanting to support the other person and make them happy. So there's a different selflessness in the love that's beautiful and different. And healthy!"

By September 2017, Jennifer Lopez and Alex Rodriguez were settling into their romance just fine. And they were even reportedly thinking about settling down too. The New York Post reported on Sept. 18 that J-Rod were looking for an apartment together in downtown Manhattan. "Jennifer and Alex are looking at apartments together that would be large enough for the both of them and their children," a source told Page Six. "Jennifer already has a beautiful place in NoMad, but Alex is currently based in Miami and doesn't have an apartment in the city." The source added, "They are totally inseparable."

Seriously, Alex Rodriguez might be Jennifer Lopez's biggest fan when it comes to her music. The baseball legend has seen her Las Vegas show more times than we can count. Since they began dating, video and pictures have shown A-Rod in the audience singing, dancing and even doing her choreography as she performs. Often times, his daughters are with him. On Sept. 12, 2017, he spoke about how much his children look up to J.Lo. "There is not a better role model than Jennifer," he told "Extra." "My daughters, they look up to [her], being a Latina woman in this country, doing the things she has done and the way she pays it forward. If it doesn't help socially, she is not interested. I can't even keep up with her jobs. She's Superwoman, and my daughters, the way they look at her, she has been a great [inspiration] for them."

What makes Jennifer Lopez and Alex Rodriguez work? In his words: "I think we're just best friends," Alex told "Entertainment Tonight" on Sept. 20, 2017. "We just love spending time together. Our kids love each other, so it's a good thing." He also said they simply support each other's interests, which doesn't go unnoticed. "It's a good time for us," he said, "and it's great to be supportive and loving towards each other."

Think there's love there? In Jennifer Lopez's words: "I feel really lucky right now," she told "Extra" in the summer of 2017 of her relationship with Alex Rodriguez. "He's a loving father. He's a generous human being with his family, with his friends, with me. He's caring and sweet and capable and responsible and just all the beautiful things you would want a man to be."

Public declaration? In November the genetically blessed couple shocked us all by posing for an extensive December Vanity Fair cover story featuring the two in domestic bliss. The couple used the spread to open up about their personal life and explain how they got together. "He was sitting there in his white shirt, very confident and manly, but then he was just so talkative! I think he thought I was going to be this loud person, but I'm not. I just listen. So he's talking, talking about his plans, about how he had just retired from baseball, about how he saw himself getting married again, all these things you wouldn't normally talk about on a first date. I don't know if he thought it was a date. I thought it was a date." 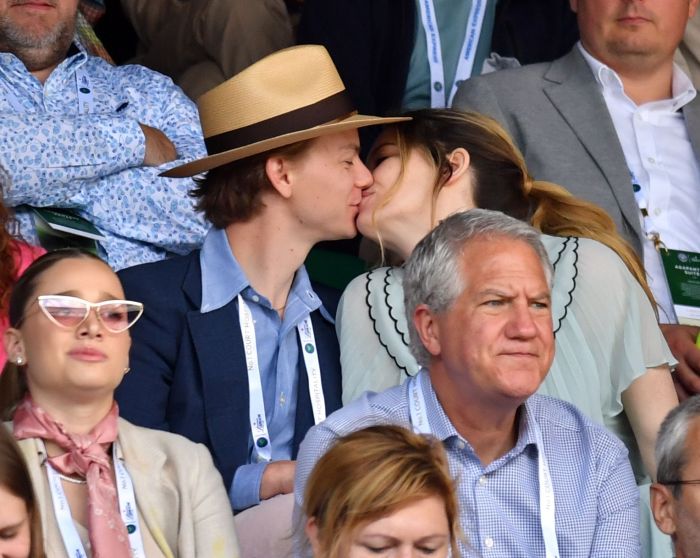