The ups and downs of Demi Moore's relationship with Ashton Kutcher figures prominently in her new memoir, "Inside Out." But after the book hit shelves on Tuesday, Sept. 24, Page Six published a story about a lesser-known romance from Demi's past — and a claim she made that the lover in question now says is untrue. According to Demi's book, Jon Cryer lost his virginity to her when they were filming the 1984 movie, "No Small Affair." She writes about regretting having been "callous" regarding his feelings when they were involved and says she worries she "stole what could have been such an important and beautiful moment from him." According to Jon, however, Demi has no reason to be upset — because he was not a virgin when they slept together. "Well, the good thing about this is she doesn't have to feel bad about it anymore, because while I'm sure she was totally justified making that assumption based on my my skill level (and the stunned look on my face at the time), I had actually lost my virginity in high school," he tweeted Tuesday. "But she's right the other part," he added. "I was over the moon for her during a very troubled time in her life. I have nothing but affection for her and not a regret in the world."

"Jersey Shore" star Mike "The Situation" Sorrentino feels like "a changed man" after serving eight months in prison for tax evasion. Speaking to ET this week, the reality star gushed about how happy he is now that he's put his his prison sentence behind him. "It's fantastic. I have my beautiful wife next to me. I'm healthy, I'm sober, back at work with my best friends on the No. 1 show on MTV and just living the dream," he said. "You sort of take your freedom for granted sometimes," he continued. "Once you get out, you are taking advantage [of] every minute. Every second, every meal, every conversation with my beautiful wife, with my friends. I love my job, so I am on such an awesome road and we are very excited to see what the future has to offer." Mike also noted he's aware that going to prison after spending so much of his adult life in the spotlight requires careful footing. "Our main goal throughout the whole process was to handle it with grace and class," he said. "Not only for ourselves but to show the young generation out there how to handle adversity and move forward and continue to be the best, even if you make mistakes." As it turns out, he watched his life's story play out — including his wedding — on "Jersey Shore: Family Vacation" while he was behind bars. "It's a very uncomfortable situation from start to finish [but] it's not the end of the world," he said. "I didn't feel sorry for myself, but any time something good happened in our lives, I would be in my feels for that. … "I was just proud of myself that, even under extreme stress and adversity, I was still able to do my job and do it well. And still able to earn an income while in prison." The Situation was released from the Federal Correctional Institution in Otisville, New York, on Sept. 12.

Jessie J's relationship with Channing Tatum seems to be inspiring new music for the singer. Page Six reports Jessie performed a "a new love song about her boyfriend" at the Troubador in Los Angeles on Sunday, Sept. 22. Singing, "Let's be still, just stay calm, so we're not rushing what we are," Jessie sang. "Pressure on, just have fun / It's not a race, no need to run," she continued. "If it's forever / Let's just simply be in love." The couple was first linked romantically in October 2018; Jessie's new ballad comes amid news Channing's ex, Jenna Dewan, is expecting her first child with her boyfriend, Steve Kazee.

Gwyneth Paltrow's styylist is speaking out after the internet went to town on the actress over her painfully slow, teeny-tiny step-filled walk across the stage to present an award at the Emmys on Sunday, Sept. 22. After footage of the awkward stroll spawned memes and jokes galore ("this is the exact way I move when I am heading to the bathroom but I don't want anyone to know it's an EMERGENCY" one Emmys viewer quipped on Twitter), stylist Elizabeth Saltzman told The Hollywood Reporter she had a perfectly good reason for dressing Gwyneth in something she could only shuffle around in. "That's because in 1963 there were no back slits!" she explained of the vintage Valentino gown. "It was not that she was having this fabulous walk, which she already has. In order to keep the dress authentic, I didn't want to change Mr. Valentino's design." She added: "It was a fun way to put our nod towards wearing your clothes more than once, to honor a very dear friend, and to look like a billion dollar babe." Meh, walking's overrated.

Prince Harry and Duchess Meghan's coupled-up adorableness was in high gear on Tuesday, Sept. 24, as they dug their heels into the second day of events scheduled for their royal tour of southern Africa. While visiting the Cape Town, South Africa, branch of Waves for Change — a charity devoted to providing surf therapy for communities affected by violence — the royals joined in a circle of local kids, surf coaches and mentors to talk to the children about mental health issues, according to ET. Part of the lead-in to the conversation involved a little group dancing and Meghan's moves reportedly sparked some chatter about dancing being her key strength. She said that in fact, her strength is "parenting," then redirected the attention to her husband, telling the group, "he's the best dad." The kind words in turn inspired Henry to look into his wife's eyes and announce, "ah, she's the best mum." They were later photographed sharing a kiss on the lips, which ET notes is rare for British royalty, before Meghan retreated to be with their son, Archie, while Harry headed to the next event. The two are also slated to visit Botswana, Malawi and Angola during their tour.

Kim Zolciak-Biermann slams trolls after backlash about her daughter's makeup

Kim Zolciak-Biermann refuses to worry about critics who say her 5-year-old daughter is too young for makeup. After the reality shared a pre-"Don't Be Tardy" interview pic of Kaia Biermann in which the little girl appeared to be wearing a full face of cosmetics, trolls popped up in the comments to chastise her. Kim, however, shut them down quickly. "Sweetie stop reaching," she wrote to one social media user who claimed Kaia had eyeliner on (via E! News). Speaking to another who said it looked like she was wearing hair extensions, Kim said: "…now that's funny!" Kim's previously defended herself in the wake of criticism about her other five children. "I feel like I'm a really good mom," she said in a March 2019 edition of "Watch What Happens Live." "We all make mistakes and we all learn as we go," she explained. "I'm very proud of all of my children. I think I'm a really good mom and nobody can really take that."

"Paris is always a good idea … KYLIE X BALMAIN." That's how Kylie Jenner announced a new collaboration she's launching this week with French brand Balmain on social media. According to Page Six, the hashtag "#PFW" she included means she'll be accenting the models at the Balmain runway show during Paris Fashion Week with makeup from the "KYLIE X BALMAIN" line, part of her multi-million dollar makeup empire. WWD has since reported Kylie is the "artistic director of makeup" at the show, which takes place Friday, Sept. 27. The fashion mag adds that in addition to lip color and eye shadow, the new line will feature "accessories incorporating makeup" including bracelets and belts with built-in eye shadow containers in them and knuckle dusters with lip-gloss inside. Kylie's reportedly credited Balmain with the idea, which was sparked by the pink Blamain jumpsuit she wore to the 2019 Grammy Awards. "She wanted to know when the first makeup artist will be arriving backstage, so she's going to be there at 7:30 a.m. to be the first to work on all the models," Balmain designer Olivier Rousteing told WWD. "There's a definite look for the show, but within that, each girl will have different makeup depending on their skin tone and the clothes they'll be wearing."

"Friends" officially turned 25 on Sunday, Sept. 22, and longtime real-life pals Courteney Cox and Lisa Kudrow carved out some time to honor the milestone together. According to photos on the actresses' Instagrams, Courteney and Lisa, who played Monica and Phoebe on the show, staged a miniature reunion — with the help of a few mutual friends. Posting pics that showed the two sitting before a fire flanked by Judd Apatow and singer Charlie Puth, Lisa joked, "So excited to celebrate we burst into flames #friends25," while Courtney wote "Trying to play it cool with all this heat. #friends25." ET reports the get-together was also a birthday celebration for Lisa's producing partner Dan Bucatinsky.

Justin Bieber has a new 'side hustle'

Justin Bieber's stretching his creative potential … into the realm of hand painting sneakers. On Tuesday, Sept. 24, the singer shared a photo of an apparently newly painted light pink Vans low-top surrounded by Sharpies, fabric paint and other art supplies. "Found a side hustle," he captioned the pic. While we're not convinced customizing retro kicks is going to be quite as lucrative as recording pop hits, the post is one of multiple hints things are looking up for Justin as he continues to work on issues related to depression and anxiety. Justin's wife of one year, Hailey Bieber, seemed to think the snap was a good sign, too. "Love u bae😘😘," she wrote in the comments. The pair recently celebrated their one-year anniversary, having said "I do" last September in a courthouse in New York City. They're reportedly planning a second, more religious ceremony before family and friends in the coming weeks.

There was a time when Will and Jada Pinkett-Smith were consumed with worry about Jaden Smith's eating habits. The family broached the matter on this week's edition of "Red Table Talk." Will and I had a bit of an intervention with Jaden because he's a vegan now, but we realized he wasn't getting enough protein," Jada recalled (via Us Weekly). "He was wasting away. He just looked drained. He was just depleted. He wasn't getting the nutrients. … There was even grayness to his skin. We got really nervous." Jaden, 21, chimed in to say he's now vegetarian, not vegan, having changed his diet about a year ago. "I was just eating, like, two meals a day … maybe one. Maybe just that one big meal, and I'm like, 'Oh, you know, I didn't get around to it,'" he said of the weight loss, to which his dad replied, "You're definitely looking better now." 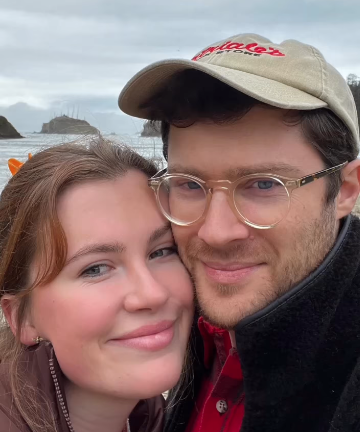