The show must go on! After a few pandemic-related production delays, "American Horror Story: Double Feature" finally returned to FX with a brand new all-star lineup that includes fresh face Macaulay Culkin and veteran talent like Sarah Paulson, Evan Peters, Frances Conroy and Finn Wittrock. To celebrate the 10th season, which debuted in late August 2021, Wonderall.com is catching up with former ensemble cast members of the horror anthology series, starting with Dylan McDermott… The actor starred on the very first season of "American Horror Story: Murder House" circa 2011. He reprised his role as Dr. Ben Harmon, a philandering psychiatrist who unknowingly moves his family into a haunted mansion, on "Apocalypse." He also starred on 2012's "Asylum" as illegitimate child Johnny Morgan and on "1984" as a sinister hitchhiker named Bruce.

RELATED: "Boyz N the Hood" 30th anniversary: Where are they now?

Much like Emma Roberts, Dylan McDermott also went through a major breakup after his last appearance on "AHS." He and Maggie Q, who met about five years earlier on the set of the short-lived CBS police drama "Stalker," ended their four-year engagement in 2019. The dad of two, who shares daughters Colette and Charlotte with ex-wife Shiva Rose, was in 2019 linked to Brazilian model Hethielly Beck. Professionally, Dylan hasn't strayed too far from from his "AHS" family, joining another of Ryan Murphy's star-studded ensemble casts with the 2020 Netflix miniseries "Hollywood." In 2021, he moved back to primetime TV with a major role as mob boss Richard Wheatley on NBC's "Law & Order: Organized Crime" spinoff. He'll also appear in the 2021 HBO Max biopic "King Richard," which focuses on Venus and Serena Williams' father and tennis coach.

It's only been a few years since Emma Roberts last appeared on "AHS," but so much has changed in her personal life since then. For starters, she became a first-time mom! Emma and "Triple Frontier" actor Garrett Hedlund welcomed a son in December 2020 and swiftly debuted their bundle of joy on Instagram: "Thank you 2020 for getting one thing right. Our bright light Rhodes Robert Hedlund." The new parents started dating shortly after Emma broke off her engagement to "AHS" co-star Evan Peters in 2019, finally ending their tumultuous seven-year romance for good. Emma churned out a couple of films before taking on motherhood, including the 2020 Netflix rom-com "Holidate" and the big-screen thriller "The Hunt." She's currently staying with Garrett and their newborn son on location in Boston to shoot her first movie since giving birth, a 1976-remake called "About Fate." The door may not be closed on Emma going back to work with "AHS" creator Ryan Murphy, who's alluded to the idea of a "Scream Queens" reboot. Emma starred on the original 2015 FOX slasher series during its two-season run.

Connie Britton also starred on "Murder House" and "Apocalypse." She played Ben Harmon's wife, Vivien, who copes with the aftermath of a miscarriage.

Connie Britton continues to be one of the most talented and hardest working single moms in Hollywood a decade after adopting son Yoby from Ethiopia. She tackled life with a then-newborn in the midst of shooting "AHS," wrapping up five years as football wife Tami Taylor on "Friday Night Lights" and starting production on ABC's 2012 country music melodrama "Nashville." Connie's star power helped make the soapy series a huge success for six seasons. After it wound down, she jumped right back into work with two big projects in 2018: FOX's first-responder drama "9-1-1" and Bravo's true-crime anthology series "Dear John," which she also executive produced. In 2021, Connie starred on "White Lotus," a satirical HBO miniseries centered around the lives of vacationing guests at a Hawaiian resort. She'll next appear in a big-screen adaption of the novel "Luckiest Girl Alive" with fellow "AHS" star Finn Wittrock.

Lady Gaga's acting career has risen to new heights since she won a Golden Globe in 2016 for her breakout TV performance on "AHS." In 2018, fresh off a broken engagement to "Chicago Fire" hunk Taylor Kinney, she took on the big screen starring alongside Bradley Cooper in "A Star is Born." Gaga scored an Oscar nod for best actress and her first Oscar win for one of the love story's original songs, "Shallow," which she and Bradley performed at the 2019 Academy Awards ceremony. Their steamy off-screen rendition of the ballad sparked serious romance rumors, which were denied by both parties. (Gaga had just broken off an engagement to talent agent Christian Carino, and Bradley's then-girlfriend, model Irina Shayk, was sitting in the audience during the duet.) Gaga has since moved on romantically and professionally: She's been in a relationship with tech exec Michael Polansky since late 2019 and in 2021 will star in "House of Gucci."

Zachary Quinto starred on "Murder House" as Chad Warwick, a murdered previous owner of the haunted mansion, and on "Asylum" as progressive psychiatrist Dr. Oliver Thredson.

Zachary Quinto first played Spock in 2009's "Star Trek" reboot and ended up reprising the role twice following his time on "AHS." He slapped his pointed-ears back on for 2013's "Star Trek Into Darkness" and 2016's "Star Trek Beyond" but still made time for other projects in between like "Hitman: Agent 47" and the biopic "Snowden." More recently, he starred in a 2020 Netflix film adaptation of the 1968 play "The Boys in the Band," which featured a cast comprised of openly gay actors including fellow "AHS" star Matt Bomer. He also starred on the short-lived supernatural-horror series "NOSA42" in 2020 and is set to lend his voice to characters in two upcoming animated flicks: "Invincible" and "The Proud Family: Louder and Prouder." There hasn't been any major new news on the dating front since Zachary and Miles McMillan ended their five-year relationship in 2019.

Taissa Farmiga's Hollywood star has only shined brighter since she finished working on "AHS." She's slated to star on the upcoming HBO series "The Gilded Age," which was developed by the historical masterminds responsible for "Downton Abbey." Her latest feature film, the 2021 psychological thriller "John and the Hole," was selected to screen at both the Cannes and Sundance film festivals. Taissa and director Hadley Klein tied the knot in August 2020.

Chloe Sevigny had a supporting role on "Asylum" as Shelley, a nymphomaniac resident of Briarcliff for the criminally insane. She also starred on "Hotel" as pediatrician Dr. Alex Lowe, whose life falls apart following her son's abduction.

In the five years since Chloe Sevigny has starred on "AHS," she found love, got hitched and started a family. She and art gallery director Sinisa Mackovic had been dating for two years when news of her pregnancy broke in early 2020. The couple said their vows that March with a quiet city hall ceremony in New York City and welcomed son Vanja two months later during the height of the coronavirus pandemic. Chloe is now working on the upcoming romance-horror movie "Bones & All."

Matt Bomer appeared on an episode of "Freak Show" as hustler Andy and also starred on "Hotel" as another of the Countess's exes, Donovan.

Matt Bomer almost doesn't count as a former "AHS" star because he recently went back for more of the action. But instead of the original, he signed on for Ryan Murphy and Brad Falchuk's new spinoff "American Horror Stories," which premiered in July 2021. In 2020, he nabbed a thrilling lead role on the second season of USA's "The Sinner" and shined on the big screen as part of the openly gay cast of "The Boys in the Band." When Matt's not working, he's got his hands full with the three teenage boys he shares with hubby Simon Halls.

Jessica Lange just couldn't quit working with "AHS" masterminds Ryan Murphy and Brad Falchuk, as seems to be the trend with many of her other former castmates. Just a year after wrapping "Apocalypse," she signed on for another of the creative duo's projects, the 2019 Netflix series "The Politician." Jessica has since been laying low, but a little downtime is well deserved for the seasoned actress who has two Oscars, five Golden Globes and three Emmys to her name. She also has three grown children, and two grandchildren, from previous relationships with ballet dancer Mikhail Baryshnikov and playwright Sam Shepard.

Matthew Morrison starred on "1984" as Trevor Kirchner, the activities director at Camp Redwood during a slew of serial-killer attacks.

In June 2021, Matthew Morrison and wife Renee welcomed their rainbow-baby second child, daughter Phoenix. Matthew, who's perhaps best known for his work on the high school musical series "Glee," has stayed low key on the work front since "AHS" with the exception of his 2020 Christmas TV special, "Dr. Seuss' The Grinch Musical." 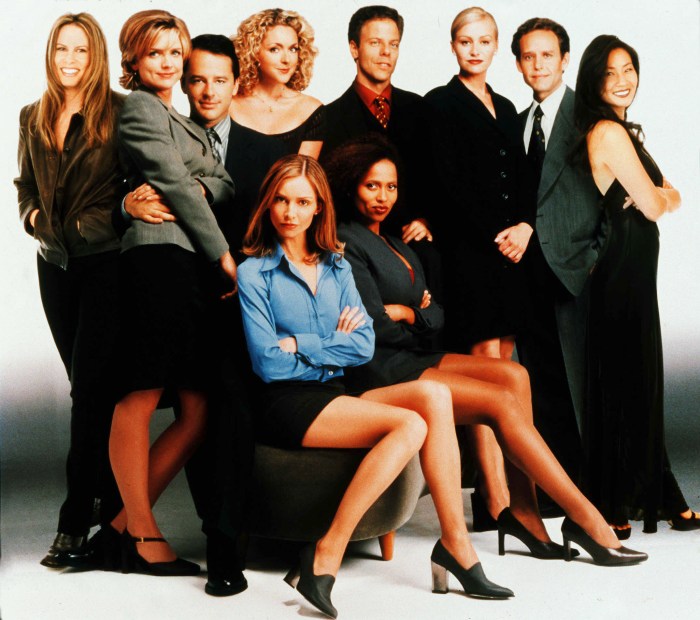