Wonderwall.com is taking a look back at the stars who found love, suffered heartbreak or experienced some other major event in their love lives in November 2018, starting with one of our favorite former power couples: On Nov. 7, five days after Ben Affleck and Jennifer Garner submitted their final divorce paperwork and more than three years after they announced their split, a private judge signed off on the documents to officially end their marriage. (Their divorce will be backdated to Oct. 9, however, because that's the date the actor signed the paperwork, which his former missus previously signed.) Now keep reading for more of the month's biggest celeb love life updates…

On Nov. 20, Page Six broke the news that Robert De Niro and his wife of more than 20 years, Grace Hightower, have called it quits. The duo, who tied the knot in 1997 after 10 years of coupledom, came close to throwing in the towel once before: The actor filed for divorce back in 1999. But the pair, who have two children, reconciled and renewed their wedding vows in 2004.

Mandy Moore and Dawes rocker Taylor Goldsmith tied the knot in the backyard of their Los Angeles home on Nov. 18. According to E! News, Minka Kelly, Mandy's former love Wilmer Valderrama and "This Is Us" co-stars Milo Ventimiglia, Chrissy Metz and Sterling K. Brown were among the 50 guests during the intimate nuptials. The duo got engaged in 2017 after two years of dating.

Paris Hilton and Chris Zylka have called it quits nearly a year after getting engaged, Just Jared reported on Nov. 19. "They broke up and called off their engagement earlier this month," said a source. "Their relationship started to become off-kilter after about two years together." The duo originally planned to tie the knot on Nov. 11 but pushed back their wedding date in August.

On Nov. 8 — a few days after she was spotted with some suspicious bling on her left ring finger — Meg Ryan took to Instagram to confirm that she and off-and-on love John Mellencamp are engaged.

On Nov. 14, DailyMailTV published a lengthy report detailing Stephen Baldwin's alleged two-year affair with professional masseuse Ruth Perez Anselmi. The report included incriminating photos and videos of the pair together, screen shots of their purported text message exchanges and an interview with one of Ruth's friends. The following day, the British tabloid published an interview with Ruth herself in which she confirms her relationship with the "Bio-Dome" star, who's been married to wife Kenya Baldwin for 28 years. When a videographer confronted Stephen about the alleged affair, he didn't exactly deny anything, instead firing back, "You are out of your mind, brother. … You guys are just crazy. … Why do you guys do these sick things?"

Ariana Grande and Pete Davidson's breakup played out in public throughout early November. First, the funnyman seemingly made light of their split (and revealed that he'd previously proposed to ex-girlfriend Cazzie David) in a promo for "Saturday Night Live" that dropped on Nov. 1, infuriating the singer and prompting her to tweet, "for somebody who claims to hate relevancy u sure love clinging to it huh." Two days later, she dropped her latest banger, "Thank U, Next," in which she favorably addresses Pete, as well as former loves Big Sean, the late Mac Miller and backup dancer Ricky Alvarez. The comedian reportedly caught wind of the song, which moved him to say a few kind words about his ex-fiancée on the Nov. 3 episode of "Saturday Night Live." Said Pete during the "Weekend Update" segment, "I know some of you are curious about the breakup, but the truth is, it's nobody's business and sometimes things just don't work out and that's OK. She's a wonderful, strong person and I genuinely wish her all the happiness in the world." It's been all quiet since then — and "Thank U, Next" went on to enter the charts at No. 1.

Chrissy Metz, 38, said back in October that there's a new man in her life. On Nov. 13, Us Weekly identified him as 25-year-old percussionist Hal Rosenfeld. They've reportedly been dating for a few months.

On Nov. 18, The Sun revealed that Princess Beatrice is dating 34-year-old property developer Edoardo Mapelli Mozzi (pictured in 2013). Things reportedly got serious fast for the pair: The 30-year-old royal introduced the divorced father of one to her parents, Prince Andrew and Sarah, Duchess of York, and friends have said that an engagement could be imminent.

Kate Beckinsale, 45, was seen packing on the PDA with 30-year-old comedian Jack Whitehall, who previously romanced Gemma Chan, during a night out on the town in West Hollywood on Nov. 3. "They were like a pair of loved-up teenagers and weren't trying to hide their feelings, they were practically sitting on top of each other," a spy told The Sun.

Page Six reported in early November that Kendall Jenner and Ben Simmons are giving it another go after their romance of just a few months fizzled in late August. Three days after the model and the basketball star were seen partying together at a bowling alley in Philadelphia, Kendall was photographed watching her off-and-on beau's basketball team take on the Nets from a suite at Brooklyn's Barclays Center.

In early November, multiple media outlets reported that Khloe Kardashian is still conflicted over her relationship with Tristan Thompson — especially as she's forced to relive his cheating scandal on her reality show, "Keeping Up with the Kardashians." The general consensus was that although she has trust issues and fears that things will never be normal between them, the new mom is unwilling to give him the boot because she wants their daughter to grow up with both parents in her life. Then in mid-November, TMZ reported that the pair were actually doing just fine leading up to the holidays and that the reason the reality star hadn't been in Cleveland, where her beau plays basketball for the Cavaliers, is because she had to shoot "Keeping Up with the Kardashians" in Los Angeles. Khloe then delayed her trip to Ohio to be with her family in Los Angeles as deadly wildfires raged across California, though she and Tristan spent Thanksgiving together at his Cleveland home with their daughter.

Jaden Smith confused fans by calling Tyler, the Creator his "boyfriend" while performing at the Camp Flog Gnaw Carnival in Los Angeles on Nov. 11. The "Yonkers" rapper appeared to deny the "After Earth" actor's claim, but a few days later, Jaden doubled down during a Nov. 16 appearance on Apple Music's Beats 1 Radio. "I recently said that Tyler, the Creator is my boyfriend, and that's true. So, just so you know," he said. (Earlier in the week, a People magazine source said that the "Icon" rapper was just "trolling" his pal.) Jaden also revealed that one of his new songs, "Fallen Part 2," is about his ex-girlfriend, Odessa Adlon. "I did really f— up in my relationship with Odessa, and this song is kind of like me being like, 'Yo, I'm sorry,' because I am sorry, and I've already said sorry to her a million times, but this is me saying sorry to her again," he said. "That's what this song is. It's kind of sad, high key. I made this in Hawaii, and I was sad."

Joshua Jackson was photographed holding hands with "The Last Ship" actress Jodie Turner-Smith while running errands in Los Angeles on Nov. 18. (See the photos here.) The pair were also seen together back in August, though it was unclear at the time that they were more than friends.

Drew Carey and Dr. Amie Harwick have called it quits less than a year after getting engaged, Radar Online reported on Nov. 13.

Glen Powell and "Extra" host Renee Bargh are an item. They've been dating "for six months," a source told Us Weekly as part of a Nov. 13 report.

On Nov. 2, Kaitlyn Bristowe and Shawn Booth — who got engaged on Season 11 of "The Bachelorette" in 2015 — announced that they've parted ways and called off their engagement.

In other Bachelor Nation news, Chris Lane and Lauren Bushnell — who got engaged to Ben Higgins on the finale of Season 20 of "The Bachelor" in 2016 — revealed that they're a couple on the red carpet at the BMI Country Music Awards in Nashville on Nov. 13. The following day, the reality star accompanied the country crooner to the CMA Awards (pictured).

In early November, Halsey and John Mayer made headlines for their flirty social media exchanges, prompting rumors they're more than friends. The buzz prompted the "Bad at Love" singer to tweet, "I just had a ground breaking idea. What if…we let female artists…have friends…without assuming that they are sleeping together?" Touché!

During an interview with New Statesman that hit the Internet on Nov. 21, Natalie Dormer revealed that she and Irish director Anthony Byrne are no longer together. The couple of 11 years had been engaged.

Danielle Fishel and "Drop the Mic" executive producer Jensen Karp tied the knot at the Carondelet House in Los Angeles on Nov. 4, just seven months after they got engaged.

After 21 years of marriage and four children together, Larsa Pipped filed to divorce Scottie Pippen in Los Angeles on Nov. 2. It's not the first time the longtime couple have come close to calling it quits. The basketball legend filed for divorce in October 2016, but by September 2017, it appeared as though he and Larsa had reconciled, and then last November, they called off the divorce. A source told Us Weekly that the pair tried to make it work, but ultimately, "it wasn't the same after Scottie filed in 2016."

Imagine Dragons frontman Dan Reynolds and his estranged missus, Aja Volkman, are "trying to work things out, " a source told Us Weekly as part of a Nov. 14 report. The duo — who announced in April that they were calling it quits — sparked reconciliation rumors when they posed together on the red carpet at the Hollywood Film Awards on Nov. 4. Later that night, the rocker gushed over Aja while accepting an award for his HBO documentary "Believer."

On Nov. 6, DailyMailTV published an interview with model Justyna Monde in which she alleges that she had an affair with Mohamed Hadid — the father of models Gigi Hadid, Bella Hadid and Anwar Hadid — between 2014 and 2017, even though the real estate mogul has been engaged to another model, Shiva Safai, since 2013. Justyna claims that she started seeing Mohamed after he slid into her DMs on Instagram in September 2014 and that she didn't know he was engaged to another woman. According to the 25 year old, Mohamed asked her to be his girlfriend but she said no because she was also engaged to someone else. She allegedly called things off with him when she moved to New York to become a social media influencer because she "didn't want to hurt anybody anymore." 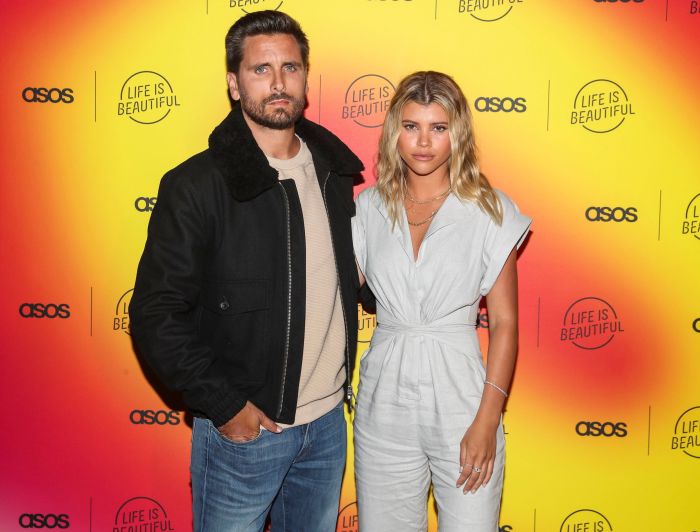 Matt Lauer reportedly wants to work again; will his feuds with Ronan Farrow and Savannah Guthrie get in the way? Plus, more news