Is Blake Shelton getting a little thrill out of recent reports his ex, Miranda Lambert, is dating a married man? A tweet from "The Voice" star on Wednesday, April 25, sure made it seem that way. "Been taking the high road for a long time.. I almost gave up. But I can finally see something on the horizon up there!! Wait!! Could it be?! Yep!! It's karma!!" he posted amid rumors Miranda — who mysteriously stopped being seen with Anderson East recently — moved on with singer Evan Felker around the time they went on tour together in January. Evan's wife, Stacy Nelson, filed for divorce in mid-February, according to People. Blake's tweet isn't that cut and dry, though. When he and Miranda were still married, rumors surfaced multiple times that she had cheated. None of the rumors were confirmed. Blake's followers on twitter, however, certainly seem to be reading his tweet as a reference to his love life. As the singer retweeted reactions to his "karma" post, one stood out for its reference to Blake's girlfriend Gwen Stefani's latest album. Said the fan: "This is what the #TRUTH feels like!!! 😁🔮."

Chrissy Teigen on Kim Zolciak-NeNe Leakes feud: 'Remove me from this narrative'

In the immortal words of Mary J. Blige, "no more drama" — at least, not for Chrissy Teigen when it comes to the "Real Housewives" feud she's been getting dragged into by multiple people. A devout fan of all the "Housewives" shows, Chrissy recently hooked up Kim Zolciak-Biermann and her daughter, Brielle, with tickets to a John Legend performance. That was apparently the beginning of pitting her on Kim's side of the reality star's ongoing beef with her "Real Housewives of Atlanta" costar, NeNe Leakes. (Quickie backtrack ICYMI: The feud started with Kim accusing NeNe of having a cockroach problem and NeNe accusing Kim and her family of being racists.) "Ok I'm done with this," Chrissy tweeted this week in response to a Bravo story that referenced her (via ET). "I've talked to Kim as much as I've talked to NeNe. As a fan. I love the show. As much as I love the show, I'm not on it for a reason, please remove me from this narrative. I don't do teams. Especially when I haven't spent any quality time with either person and don't genuinely know the people. I am a fan and a viewer and y'all can keep this mess to yourselves please." She went on to say NeNe simply never asked for tickets to the show, noting that Kim and NeNe are both great — unlike, apparently, some folks associated with Lisa Vanderpump. "For the record, any interaction I've had with Kim or NeNe has been delightful. And hilarious. All the Housewives, really," she posted. "There was only one Vanderpumper that needed a good push back down to earth. Actually, two Vanderpumpers. One is barely on. Thank God."

Channeling her inner "Pretty Woman," Jessica Simpson was spotted rocking a nightie-slip dress (or maybe it's just a slip), a black lace bra and knee-high stiletto boots in New York City on Tuesday, April 24, for an ensemble that was, um, daring, if nothing else. The low-cut top of the lingerie-like dress left little to the imagination, although Jess did cover up a bit with a $3,980 Gucci jacket, according to the Daily Mail. (What it didn't cover was her figure, which outlets including Celebitchy have suggested has a bit of a bun-in-the-oven vibe.) It was one of two red, black and white Gucci she looks the designer sported during her stay in the Big Apple; on Wednesday, April 25, Jess shared a photo of herself wearing a white suit with red trim and red pocket designs. "Well Suited 😜 #GucciAgain," she captioned the pic.

File under: One more way Prince Harry and Meghan Markle's wedding will break with royal tradition. The bride and groom-to-be are set to be the first couple in royal history whose wedding will be "streamed and [made] available globally on all streaming services," according to a Wednesday, April 25, press release from Decca Records. The streamed version of the event, including performances from award-winning musicians like Sheku Kanneh-Mason and gospel ensemble Karen Gibson and The Kingdom Choir, will be released just a few hours after the service. While the streaming format is new for the royal family, Harry and Meghan aren't the first royal couple to have their own record deal of sorts; Decca also recorded and released copies of Will and Kate's wedding, Prince Charles and Princess Diana's wedding and Princess Diana's funeral service. Harry and Meghan's big day is May 19.

Looks like North West is decidedly NOT among those who are concerned for her dad, Kanye West's mental health these days. In a pair of cute posts on Kanye's rebooted Twitter feed this week, the rapper and producer showed off the dolls his daughter was playing with. "Me and Mike 😂," he captioned a shot of one very obvious Michael Jackson replica and one Ken Fashionista doll by Barbie that had been outfitted with a trench coat and gold chain (fastened, E! News notes, with Scotch tape). From the looks of things in the second post, MJ and Ken Fashionista-Kanye were looking on as North played with a number of other dolls. Kanye added: "and we danced to music Michael [sic] all morning." Never a bad way to start the day.

She's back! After laying low for months while she was pregnant with her first child, new mom Rachel McAdams walked her first red carpet this week since welcoming her baby with James Linden, a screenwriter. She stepped out on Tuesday, April 24, in a black and white, gauzy number that E! News reports is from Giambattista Valli's Spring/Summer 2018 RTW line, plus Ana Khouri earrings, for a screening of her new film, "Disobedience," at the Tribeca Film Festival in New York City. Rachel Weisz, who is also expecting, told E! it was great to her catch up with her co-star. "I just saw her today. I haven't seen her for a while. She is just glowing and looking ravishing and gorgeous. She just seems to be so happy and I am just so happy for her! She had her first baby — it's so beautiful!"

Good news for Kevin Smith! Following his February heart attack, the actor is making major changes to his lifestyle and they're already having a positive effect on his health. That's according to Kevin's daughter, Harley Quinn Smith, whose new film with Molly Ringwald, "All These Small Moments," premiered at the Tribeca Film Festival this week. Speaking to Page Six, Harley gushed about how proud she is to see her dad taking steps to protect himself. "He's doing really, really great. He's the healthiest he's ever been, he's vegan now, which is amazing," said the 18-year-old. Harley added that she's been vegan since 2016 but had no luck in previous attempts to get her dad to adopt a similar approach to eating and exercise. "Now its finally happened," she said, "and I'm so happy."

Chip and Joanna Gaines are divided on what to name baby No. 5

"Fixer Upper" stars and soon-to-be parents of five Chip Gaines and Joanna Gaines have announced their fifth child is a boy. Knowing the baby's gender in advance doesn't seem to have helped them much in the name department, though. During an appearance this week on "Today" pegged to the release of Joanna's first cookbook, "Magnolia Table," the couple seemed unsure of which direction they were going, name-wise, though Joanna did declare she was going to have the last word on this one. "I want a C name and he [Chip] wants a D name," she admitted (via E! News). "I say he got the boy, so I get to pick the name." The pair have sons named Drake and Duke and daughters named Ella Rose and Emmie Kay already. "She wants to change the pace," said Chip. He added that having one more male in the house could end up "really upsetting the balance of power," joking that "the boys might be able to outvote [the girls] from here until kingdom come." Joanna, meanwhile, is just happy her other kids will be old enough to pitch in once baby No. 5 joins the crew. "There's going to be quite the [age] gap," she said. "I'm going to have a lot of little helpers. I'm so excited." The couple ended their popular "Fixer Upper" series and premiered their new show, "Behind the Design," this month. In November, they launched their Hearth and Hand line with Target.

The strange case of Meek Mill vs. a judge who allegedly demanded he give her a shout-out on a recording of a Boyz II Men song continues to get more strange by the day — even though Meek is now out of prison, thanks to a Pennsylvania Supreme Court ruling. According to TMZ, Judge Genece Brinkley, who locked Meek up on a probation violation for which jail time was not recommended (he ended up in solitary confinement) still thinks she's treated Meek without bias. She also says via her lawyer that she's not removing herself from Meek's case. The prosecutor and Meek's attorney have asked the judge to dismiss the drug and weapons conviction at the next hearing, scheduled for next June. But the judge's lawyer says she "will not necessarily" consent to throw it out, despite the state Supreme Court politely inviting her to do just that. Meek's lawyer responded to the judge's assertion that she'll stay on the case by telling TMZ she's "a little sad and a little delusional."

Vanessa Grimaldi has a new beau

"Bachelor" alum Vanessa Grimaldi is giving the dating pool another go. "Right now I am dating someone," she said in a recent appearance on the "Help! I Suck At Dating"podcast (via Life&Style). "Again, like, I don't know where this is going to lead, but I do know I appreciate all his qualities. I feel like I'm a much better person when I'm with him. I'm just very lighthearted, and I'm focused on the right things and I'm not distracted by the fake world that we could be a part of." Vanessa and her "Bachelor" fiance, Nick Viall, parted ways eight months ago. Her new lucky guy, she says, "is not related to 'Bachelor'-world at all." In December, she told Life&Style she and Nick were "on good terms [and] we're very supportive of each other." 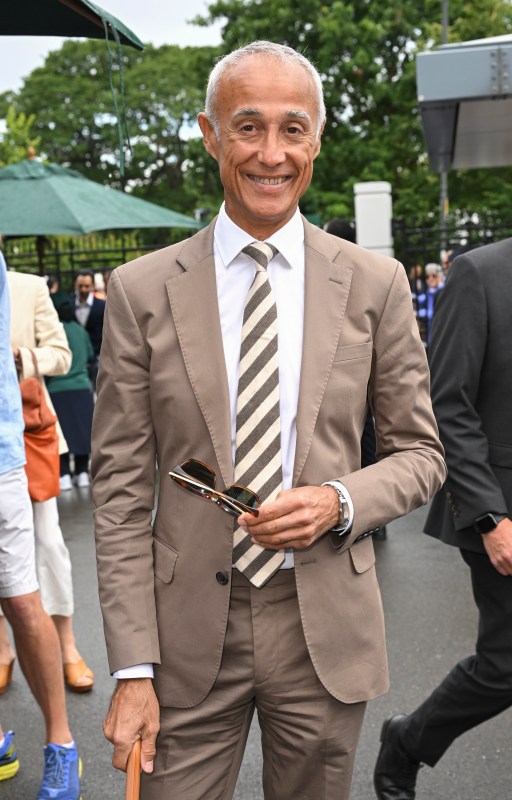 Up Next Stars at Wimbledon