At the Emmy Awards this week, there was more than a little red carpet buzz about the status of Heidi Klum's relationship with her boyfriend, Tom Kaulitz. That was thanks to the enormous diamond ring she wore on her left hand — and continued wearing the next day on "America's Got Talent." Turns out a ring is just a ring. "I don't know why everyone keeps saying that [I'm engaged]. Everyone is asking me," she told People. "When you do what I do, you wear a lot of fashion. A lot of jewelry. I always look for something that goes with the outfit. So, I wear big rings. There is nothing more to it than that. Tomorrow I have to give it back," she said, adding, "Sad." The other thing people have been inquiring of the 45-year-old seems to be the age difference between her and her beau, who's 29. "My boyfriend is many years younger than me, and lots of people are questioning that and asking about it," she recently told InStyle (via the Daily Mail). "That's really the only time when age seems to be shoved in my face and I have to give an answer for it. I don't really think about it that much otherwise. You have to just live a happy life without worrying too much about what people think because worrying is only going to give you more wrinkles." Touche.

Will Kanye West make an appearance at Beyonce and JAY-Z's L.A. shows?

It's been a while since the Carters and the Wests acted like pals in public, but that seems to be changing. Three years after Beyonce sat in the front row of Kim Kardashian West for Kanye's Season One Yeezy New York Fashion Week show — and two years after 'Ye's public diatribe slamming Bey and Jay — Kanye posted an Instagram photo of the "On the Run II" couple with the caption, "famleeeeee," on Thursday, Sept. 20. As Page Six points out, Bey's wearing a pair of clear, $850 heels from 'Ye's Season 5 Yeezy collection — and a big, bright smile — in the photo. The tab suspects repairing the couple's relationship with Kanye could be part of Beyonce's seeming 2018 seeming goal to make amends with people, from JAY-Z, with whom she renewed her vows while celebrating what's essentially their makeup album on tour, to the former members of Destiny's Child she recently reunited with at her shows in Texas. Page Six also predicts Kanye could turn up onstage with the Carters during one of their last few shows. Bey and Jay perform twice in Los Angeles this weekend.

With "Saturday Night Live" returning for its 44th season on Sept. 29, Pete Davidson seems ready to return to the world of social media — with baby steps. The "SNL" star deleted all his posts on Instagram two months ago, telling followers nothing was wrong but "The internet is an evil place and it doesn't make me feel good," adding that there's no reason he should "spend any time on negative energy when my real life is f—ing lit." He said he'd probably be back. Now, he is, albeit cautiously. On Thursday, Sept. 20, Pete posted a video that showed a sidewalk full of paparazzi taking his picture while moving backwards as he attempted to walk down the street in New York City. "Hey, how are ya? How you guys doing? You guys look great, alright. Ah! Welcome home," Pete — whose fiancé, Ariana Grande, had to turn off comments on Instagram after she started being blamed for the death of her ex, Mac Miller — can be heard saying in the clip. His caption reaffirmed his previous sentiment about the interwebs. "@nbcsnl back next week," he wrote. "f–k the internet tho…"

Tiffany Haddish made it clear she'd moved on from Katt Williams' negative comments about her at the Emmy Awards, but her longtime friend Kevin Hart is still hot about the whole thing. He appeared with Katt on "The Breakfast Club" this week and took the opportunity to tell the comic it was unfair of him to criticize Tiffany for getting ahead without paying the dues he thought other female comedians had paid because, as Kevin put it, Katt "chose drugs" over his career and it scared off major movie studios. "You had the shot!" Kevin said, according to TMZ. "You were set up to be the star. You didn't show up to work! You f—ed off promo shoots!" Kevin added another point to his tirade too. "Have you ever used your platform to f—ing bring the people that were under you up?" he asked. "You haven't! So, because you haven't, don't s–t on those that now are [successful]!!"

Rihanna is now an ambassador for Barbados

Rihanna's work with her Clara Lionel Foundation and the Global Partnership for Education and Global Citizenship Project inspired Harvard to name her its 2017 Humanitarian of the Year. Now, the singer and designer has another title to add to her resume. CNN reports Rihanna is the new Ambassador Extraordinary and Plenipotentiary for her native Barbados, a position with she's responsible for "promoting education, tourism and investment for the island." "[I] couldn't be more proud to take on such a prestigious title in my home country," Rihanna said in a statement published by JustJared. "Every Barbadian is going to have to play their role in this current effort, and I'm ready and excited to take on the responsibility. I look forward to working with Prime Minister [Mia Amor] Mottley and her team to reimagine Barbados." Congrats!

Josh Groban was 'flattered .. but very surprised' Katy Perry wrote a song about him

When Josh Groban stopped by "Watch What Happens Live" this week, one caller wanted to know how he'd reacted when he found out He'd inspired Katy Perry's 2011 song, "The One That Got Away." Katy revealed that tidbit to James Corden, calling Josh "one of my good friends." Josh was relatively open to Andy Cohen and Queen Latifah, the other guest on the show. "We did [date]," he said (via E! News). "We were both very private, and so we realized we were better as friends. And we've been very, very good friends to this day. She's the best. But, I was not expecting that. That was a double take and a spit of my coffee when I saw that." He also said that while Katy had said some "very sweet" things about him, he was a little confused after listening to the lyrics, which recount a makeout session in a Mustang and getting matching tattoos. "I'm like, 'I never owned a Mustang. I don't have a tattoo. Are you sure that's about me?'" Josh admitted. "I'm very flattered by it. But I was very surprised by it, too."

Jazz Jennings doesn't care about Derrick Dillard's opinion anymore: 'He can say whatever'

Since completing her gender confirmation surgery in June, TLC star Jazz Jennings has found a balance she never had before. "I feel like I finally have mental, physical alignment and just overall I feel so much more confident in who I am," she told Us Weekly on Thursday, Sept. 20. That confidence may be why she's not paying much attention to critics and trolls. Asked how she responds to "Counting On's" Derrick Dillard, who's repeatedly trashed her on social media, calling it "child abuse" to allow a teenager to undergo the surgery and claiming "transgender is a myth" because "gender is not fluid; it's ordained by God." Jazz, 17, says she has plenty of positive people around her and she'd rather focus on their messages than the ones people like Derrick, 29, have put out there. "Honestly, I don't give Derrick any of my attention. I don't even read the tweets that he sends out anymore because I just don't care. You know? He can say whatever. I think he's doing it for attention," she said. "Honestly if someone has a negative opinion then I don't really read or listen to them. Like COMMA why spread negativity? I listen to the people that are supportive who are saying great things — telling me that my message is meaningful and that I should continue telling my story."

Leighton Meester isn't sure 'Gossip Girl' 'was the healthiest environment'

Leighton Meester's been acting professionally since she was 11 but it wasn't until she landed the role of Blair Waldorf on "Gossip Girl" that her career really took off. Along with that success, she tells the new issue of Porter magazine, came challenges she wouldn't have had to face had she grown up in less public environments. "I would get there at 5 a.m. and leave at 8 p.m. A lot of days I didn't see the sun," she recalls of shooting the show, which aired from 2007 until 2012. "I was young when I started 'Gossip Girl.' A lot more people were suddenly around and I was being looked at. If you don't have the right perspective, you could definitely be confused by people being that nice to you or judging you for behavior that's typical of a 20-, 21-year-old, making mistakes but having to make them very publicly," she continues. "I'm not haunted by that time, but it's been interesting and helpful for me to look at it and examine it as an adult and go, 'I don't know if it was the healthiest environment.'" Like most people in their early 20s, Leighton was still trying to figure out who she was. "Because of the success of [Gossip Girl], I was put in a place where that journey was sped up," she says. "I had to figure it out quickly and with not a completely developed mind to discern between what's real and what's not, who I can trust and who I can't. I got really lucky and was able to very early on find and stay friends with people who are true." At 32, Leighton looks back on the period as "a very special time" in her life. She says people often wonder if she misses it or dreams of going back to it. "And the truth is, it was so special and such a unique, amazing experience," she sys, "but no, I wouldn't wanna go back to it. I was a kid!"

Heath Ledger's mom and dad are headed to New York City next week to catch up with their granddaughter, Matilda — and to meet Michelle Williams' new husband, Phil Elverum. "We're going to see [Matilda] in New York next week. So we'll be there a few days and see how she's grown," Kim Ledger recently told UsWeekly of the daughter Heath shared with Michelle before his accidental death in 2008. "She seems to have grown pretty tall." Sally Ledger, meanwhile, said, We get to meet [Phil] as well," adding, "Michelle's very low-key. We're all pretty low-key." In a Vanity Fair profile that came out this summer, Michelle admitted she'd secretly tied the knot with Phil. "I never gave up on love," she explained. "I always say to Matilda, 'Your dad loved me before anybody thought I was talented, or pretty, or had nice clothes." 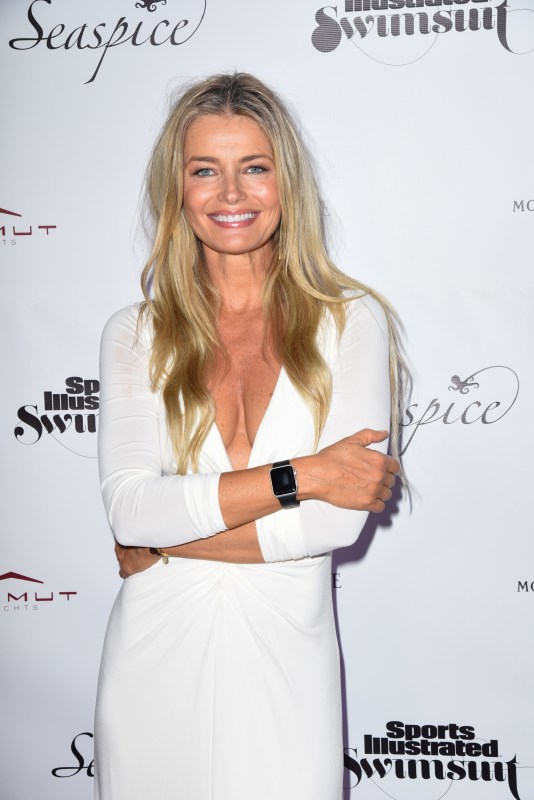