Married man Justin Timberlake is apologizing for holding hands with "Palmer" co-star Alisha Wainwright at a New Orleans bar in November and bringing embarrassment to wife Jessica Biel and son Silas. He's also denying that anything more happened between the two of them. "I stay away from gossip as much as I can," he wrote on Instagram on Dec. 4, less than two after pictures of the hand holding emerged. "But for my family I feel it is important to address recent rumors that are hurting the people I love." He added, "A few weeks ago I displayed a strong lapse in judgement — but let me be clear — nothing happened between me and my costar. I drank way too much that night and I regret my behavior. I should have known better. This is not the example I want to set for my son. I apologize to my amazing wife and family for putting them through such an embarrassing situation, and I am focused on being the best husband and father I can be. This was not that."

She's taken! Emma Stone is engaged to her her boyfriend, "Saturday Night Live" segment producer and writer Dave McCary. On Dec. 4, he posted a photo to Instagram in which the actress flaunted her engagement ring. He captioned the photo with heart emojis. The pair were first linked more than two years ago. When he popped the question isn't known.

NBC has opened an investigation into reality competition show "America's Got Talent" amid the firing of judges Gabrielle Union and Julianne Hough after their single-season run. On Dec. 4, the Gabrielle tweeted that she and NBC had a "productive" five-hour meeting about her ousting. "I was able to, again, express my unfiltered truth. I led with transparency and my desire and hope for real change," she said. NBC said in a statement that the "initial conversation was candid and productive. While there will be a further investigation to get a deeper understanding of the facts, we are working with Gabrielle to come to a positive resolution." Variety reported that Gabrielle made "complaints of [a] toxic culture on set," citing inappropriate and racist jokes and producer-judge Simon Cowell's penchant for allegedly smoking indoors. There were also reports that she was told her hairstyles were "too black." Deadline reported that Gabrielle had raised her concerns and urged others within the show to speak with NBC's human resources department, but nothing ever came of it. Simon supposedly urged her to come directly to him with issues rather than go to HR. Further, former judges Howard Stern and Sharon Osbourne have both said that "AGT" is a "boys club" with Simon as the ringleader.

Snooki is leaving "Jersey." While speaking on her "It's Happening with Snooki & Joey" podcast on Dec. 6, Nicole Polizzi revealed that she's leaving "Jersey Shore: Family Vacation." "I love you so much, and don't hate me for my decision," she said. "I am retiring from 'Jersey Shore.' I am not coming back to 'Jersey Shore' for season 4 if there is one." She cited her family as the main reason for her decision. "I try and quit every single day," she said. "I quit every time we film because I just hate being away from [my three] kids. I don't like partying three days in a row. It's just not my life anymore. I want to be home with the kids. I don't mind here and there going to a dinner or whatever, but it's just really hard for me to leave the kids and film the show."

Olivia Jade has finally spoken out about the college admissions scandal in which her parents — Lori Loughlin and Mossimo Giannulli — are involved. But she didn't really say anything, other than that she can't say anything. "Obviously I have been gone for a really long time," she said in a Dec. 1 YouTube video titled "hi again." "And as much as I wish I could talk about all of this, it's really hard for me to say this because I know that it's something that needs to be addressed. It's just unfortunately, which is also why I didn't know when I should come back to Youtube, but the reason for that is just 'cause I'm legally not allowed to speak on anything going on right now." In a few of her parting words, she said she wanted "to move on with my life." At the end of the video, Olivia thanked her fans for "sticking around."

This ain't no smokescreen — Willie Nelson has given up smoking marijuana. The country music legend has long touted his love of marijuana, and he even has his own cannabis company. In a chat with KSAT-TV published on Nov. 29, Willie said he'd quit lighting up. "I have abused my lungs quite a bit in the past, so breathing is a little more difficult these days and I have to be careful," he said. "I don't smoke any more, take better care of myself." WIllie's rep later clarified that Willie still uses cannabis in other forms and hasn't ruled out smoking again in the future.

Chrishell Stause Hartley has formally responded to her husband's seemingly abrupt divorce filing, implying that she was blindsided. In his Nov. 22 filing, "This Is Us" star Justin Hartley listed their separation date as July 8. In Chrishell's official response, obtained and published by TMZ on Dec. 3, she listed their separation date as Nov. 22, essentially indicating that they split the day he filed, not months before as he indicated. The pair — who were seen at many Hollywood events together in recent months — tied the knot only two years ago. They are at odds over finances in their dueling divorce documents — she wants him to pay spousal support and lawyer fees and he doesn't want to pay either. A source told People magazine that "Chrishell is still reeling" from the split. "Yes, they'd had some problems, but she certainly never thought he would just go and suddenly file for divorce, and not even try to save things," the source said. "He's reached a new level of fame thanks to the show and he doesn't want to close many doors right now, and that's not necessarily the path Chrishell is looking to take. She thought babies would happen soon after they got married, but it just hasn't worked out."

According to reports from earlier this year, Katy Perry and Orlando Bloom were set to tie the knot sometime in December, but the nuptials have now been put on pause, Us Weekly reported. "They changed the timing due to the location they want," a source told the magazine on Dec. 4. The couple is supposedly planning two weddings: one "local" and the other a "destination wedding." They also plan to start a family ASAP, Us's source said, explaining that Katy allegedly wants to get pregnant "soon after they get married."

The fallout from Kid Rock's expletive-laced rant toward Oprah Winfrey has begun. On Dec. 4, the rocker announced that the lease for his Made in Detroit restaurant inside Little Caesars Arena would not be renewed. A statement from Ilitch Holdings, which owns Little Caesars, said a new concept will be introduced in the space that "aligns with our community and company values." Although Kid Rock "voluntarily decided not to renew" his licensing agreement, he didn't exactly take the restaurant news in stride, taking to Facebook to call out Rev. Al Sharpton, who started the Michigan National Action Network (NAN) in 1991. "I guess the millions of dollars I pumped into that town was not enough. I will let the NAN network and others go ahead and take the wheel now. Good luck," he wrote. "I may be guilty of being a loud mouth jerk at times, but trying to label me racist is a joke, and actually only does a disservice to the black community, which I have supported my entire life, by trying to alienate myself and many others."

Felicity Jones and her husband, Charles Guard, are expecting their first child. The "Rogue One" actress's rep confirmed the news on Dec. 4. The Oscar nominee and the director have been married for a little over a year. Felicity publicly debuted her baby bump at the premiere of her newest movie, "The Aeronauts," in New York City the same day. 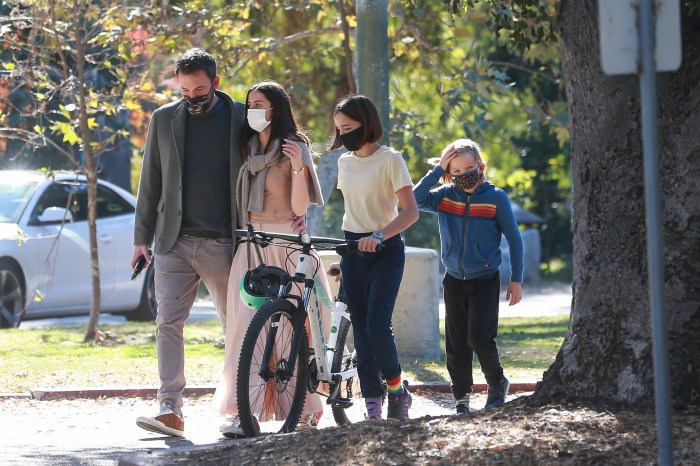