Wonderwall.com is taking a look back at the biggest celebrity hair transformations of 2020, starting with this young star's new look… On March 12, Willow Smith's friend, collaborator and rumored boyfriend Tyler Cole shaved her head as part of their performance art piece at The Museum of Contemporary Art in Los Angeles. "@willowsmith at her interactive experience. My baby shaved her head! Again!" proud mama Jada Pinkett Smith captioned a video of her daughter, who started the day with shoulder-length dreads. Back in 2012, a 12-year-old Willow shocked her parents when she suddenly shaved her head in the midst of her "Whip My Hair" tour. Now keep reading for more of the year's biggest celeb hair makeovers…

After shaving her head in late 2019, Evangeline Lilly bleached the hair she'd grown back by early 2020 to play a woman with terminal cancer in the upcoming thriller "Till Death." On Jan. 6, she took to Instagram to share a video showing off her new hair hue: "Final product. TOO MUCH FUN. 🤠 #blonde," she wrote in the caption. Two weeks later, she returned to Instagram to share a video of herself getting a touchup, explaining in the caption that maintaining the look had become "a full time job." She also thanked her hairstylists for "helping me to reestablish [my character] and committing to maintaining her while I tell this story." On March 1 — after she wrapped shooting the film — the "Lost" alum revealed in another video that her "hair is happy we wrapped" because it's "been FALLING OUT for two weeks now." Wrote Evangeline, "7 complete bleachings in 6 weeks is NOT how one is supposed to treat their follicles but mamas hair groweth fast…like, crazy fast, and roots were not an option when playing a natural blonde. Alas 🤷🏻‍♀️ what's a lady to do?? #theshowmustgoon #balding #ladybalding."

Elisabeth Moss started 2020 with blonde locks that fell just past her shoulders. She debuted a new shorter 'do at the French premiere of "The Invisible Man" in Paris on Feb. 17.

RELATED: Shocking celeb hairstyles from over the years

Brielle Biermann made waves when she dyed her hair brown (with blonde highlights) in late 2019. In late February, she went even darker. The reality star, who typically sports blonde locks, captioned a slideshow of photos of herself, "Get you a girl who can do both." She later showed off her new hair hue on her Instagram Story.

On Feb. 25 — four days after wrapping the series finale of "Modern Family" — naturally brunette Ariel Winter had her hair dyed red during a visit to Nine Zero One salon in West Hollywood.

Katherine Heigl — who dyed her long, blonde hair a dark brunette shade in 2019 — debuted a new cut on Feb. 18: a blunt bob. "Fresh cuts for the Kelley's. The girls were no where to be found for these pics…or they're hiding cause they don't want to be in the pic…but every one of us got our hairs done and we feel fine! PS. I will capture the girls cuts one way or another…they can't hide forever. 😏," the actress captioned this pic with son Joshua Kelley Jr.

Jane Fonda — who started the year with a super-short blonde bob — debuted a silver pixie cut while presenting the Academy Award for best picture during the 2020 Oscars on Feb. 9. Her colorist, Jack Martin, told People magazine that it took seven hours to achieve the actress-activist's "icy silver blonde" shade. "She is someone who is very far from being nervous about a hair makeover. … She's the kind of person who is not afraid of change," he said.

Kylie Jenner took to her Instagram Story on Feb. 13 to show off her new super-short bob. "@jesushair said he was giving me a trim and cut off all my hair," she scrawled across a mirror selfie. Her hairstylist, Jesus Guerrero, later joked on his own Instagram Story, "@kyliejenner is trying to play me."

On Feb. 17, colorist-to-the-stars Jack Martin took to Instagram to share this photo of Sharon Osbourne's new hair hue: After nearly two decades of dying her hair a deep red shade, the former reality star decided to embrace her naturally all-white tresses, he explained in the caption. "Another great day in my career welcoming the most beautiful and elegant talk show host and entertainer @sharonosbourne for a complete transformation," Chris wrote. "Sharon has 100% white hair and she was coloring her hair once a week dark vibrant red for the past 18 years. she explained to me that she wanted to do this transformation long time ago but every time she attempts it ends up with a disaster. Sharon was very tired of coloring her hair once a week and she was obligated to since she is on tv almost every day hosting her popular tv show @thetalkcbs . I didn't promise Sharon anything but I told her I will try my best, it took me a total of 8 hours from start to finish to get her to a platinum blonde so she doesn't have to be committed to coloring her hair once a week anymore. I had great time spending my day off with this gorgeous, humble, and sweet soul."

Marie Osmond has sported a long brown mane for decades, so it came as a huge shock when she took to Instagram in mid-February to debut a blonde bob. "I think blondes DO have more fun!!" she captioned a slideshow of selfies with her hairstylist, Cody Renegar.

Katy Perry started 2020 with platinum-blonde locks. She debuted her new peach dye job during a visit to the "Jimmy Kimmel Live" studios in Hollywood on Feb. 12.

Miley Cyrus kicked off 2020 by cutting her hair into a mullet-inspired 'do. "New Hair. New Year. NEW MUSIC!" she captioned a Jan. 6 slideshow of photos showing off her new cut on Instagram. A month later, she gave the world a better look at her her haircut during the Feb. 7 Tom Ford fashion show in Los Angeles.

Saoirse Ronan's hairstylist, Adir Abergel, gave her bangs the morning of the 2020 Oscars! She debuted her new look, which was inspired by Audrey Hepburn, on the Feb. 9 red carpet.

Eva Mendes took to Instagram on Feb. 1 to show off her new bob in a video promoting her collection for New York & Company. "⁣Back to work. Design meeting. My coworker getting her kicks and teasing me about my 'cute' new hair. Thanks to @giannandreahair for making my mom life a helluva lot easier," she wrote in the caption. Her hairstylist, Giannandrea, later wrote on Instagram that it's the first time the actress has sported a short haircut. "I was stunned when she asked for me to [cut it]," he wrote, adding that she's now "all chic" and "a modern designer business woman and cool mama."

Olivia Colman went blonde the morning of the 2020 Oscars. She debuted her new look on the red carpet on Feb. 9. "Nothing like a major change the DAY of the Oscars," her hairstylist, Marcus Francis, wrote on Instagram.

Ricki Lake took to Instagram on Jan. 1 to reveal that after years of suffering from hair loss, she'd decided to just shave her head. "I have been struggling with hair loss for most of my adult life," she captioned a slideshow of photos of her new close-cropped 'do. "It has been debilitating, embarrassing, painful, scary, depressing, lonely, all the things. There have been a few times where I have even felt suicidal over it. Almost no one in my life knew the level of deep pain and trauma I was experiencing. … Ever since I played Tracy Turnblad in the original 'Hairspray' back in 1988 and they triple-processed and teased my then healthy virgin hair every 2 weeks during filming, my hair was never the same." She went on to attribute her hair loss "to many factors," including "yo-yo dieting, hormonal birth control, radical weight fluctuations over the years, my pregnancies, genetics, stress, and hair dyes and extensions." She "tried wigs on a few occasions but never could get used to them," she wrote, adding that "it all felt fake" and made her feel "super self-conscious and uncomfortable." She also had steroids injected into her scalp and tried supplements. "My hair would recover and then shed again. It was maddening," she concluded. Two days later, she showed off her new look while visiting the "Good Morning America" studios in New York City.

Chrissy Metz started the year with shoulder-length locks. (Here's how she wore her hair during the 2020 DGA Awards on Jan. 25.) So it was pretty surprising when she showed up to the 2020 Oscars on Feb. 9 with a noticeably longer hair length. As her hairstylist revealed on Instagram, they achieved her Old Hollywood-inspired 'do with the help of City of Angels extensions.

Christina Ricci started the year with shoulder-length locks. She showed off her new bob on the red carpet at the 28th Annual Elton John AIDS Foundation Academy Awards Viewing Party on Feb. 9.

Hayden Panettiere cut her shoulder-length tresses into a funky pixie in late 2019. After her locks had grown out a bit, she got yet another new 'do: an asymmetrical pixie that's extra long on top. "Thank you to my girl for my bomb hair cut!!!" she captioned a Feb. 5 photo of herself showing off her new hairstyle while posing with friend and hairstylist Naomi Szloboda.

"Judy" star Jessie Buckley got a bowl cut in the moments leading up to the 2020 BAFTA Awards on Feb. 2. "Moments before the BAFTA AWARDS red carpet, Jessie Buckley and I decided to cut her hair off to a modern day Louise Brooks inspired moment. Strong lines and committed," her hairstylist, Adir Abergel, wrote on Instagram.

Alessandra Ambrosio had extra-long, stick-straight tresses during the 2020 Grammys on Jan. 26 thanks to her hair extensions.

Silver fox! Sylvester Stallone's new gray hair (and matching beard!) could be seen in a video he posted of himself on Instagram on Jan. 28. It's a bold new look for the iconic actor, who ended 2019 with just a hint of gray in his otherwise black hair.

Chrissy Teigen rocked what appeared to be a freshly cut bob during the 2020 Grammys on Jan. 26. Within days, however, she'd started sporting a much longer hair length, leaving fans wondering if she'd been wearing a wig during music's biggest night or gotten extensions shortly after. 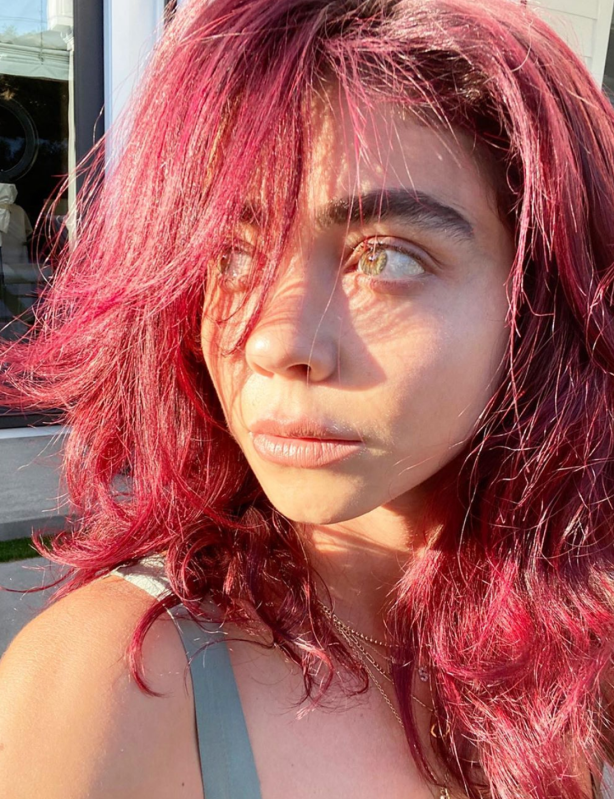 Up Next Makeovers and unders