Taylor Swift's Reputation Tour swung through her adopted hometown of Nashville over the weekend, drawing a slew of stars. Among them was Taylor's onetime bestie, Karlie Kloss, whose presence in the VIP section helped tamp down rumors the two are no longer pals. "No one puts on a show like @taylorswift…#ReputationTour Nashville was out of this world, I am SO proud of you," Karlie wrote alongside a selfie of the pair — the first such selfie to surface in nearly two years, according to E! News. Rumors Taylor and Karlie were on the outs began when Karlie's name was missing from a T-shirt Taylor wore in her "Look What You Made Me Do" video that featured the names of her famous friends. Fans quickly noticed Karlie's name hadn't made it onto the garment. This summer, Karlie spent some time on a yacht with Taylor's ex, Harry Styles, which refueled the rumors. (Karlie has denied there was a feud brewing in an interview with the New York Times.) Other celebs who joined Taylor for the show at Nissan Stadium included Tim McGraw and Faith Hill, who performed Taylor's tribute to Tim, "Tim McGraw," as well as Nicole Kidman, who brought her daughters to the concert, where they met Taylor backstage. "I first came to this city in search of a record deal when I was 11!" Taylor later wrote on social media. "I'm just as enamored by being here now all these years later. Thanks for an unforgettable night."

For more on Karlie Kloss and Taylor Swift, check out The Daily Buzz

Roseanne says she has new doctors and is 'doing better'

Roseanne Barr is still working to repair her image amid fallout from the racially offensive tweet that got her "Roseanne" reboot canned. Over the weekend, she shared two selfies on Twitter showing her blonder-than-usual hair. On one pic, she wrote, "Got new Dr.'s and am doing better now," she wrote, without elaborating. She then added a "Thanks everyone!" The comment garnered a number of negative responses, including, "Medication won't help racism …sorry." Roseanne's show was canceled this spring shortly after she compared former Barack Obama aide Valerie Jarrett to an ape and implied she had ties to the muslim brotherhood. She later blamed the tweet on Ambien.

RELATED: Aretha Franklin loses her battle with cancer and more August news you may have missed

If all goes according to Ashlee Simpson and Evan Ross' plans, their 3-year-old daughter, Jagger Ross, could be a big sister in the very near future. The couple, whose new music-focused reality show, "ASHLEE + EVAN," premieres on E! on Sept. 4, are starting to plan for another baby. "It's definitely soon … in the next year," Ashlee recently told the network "Definitely in the next year would be nice." In the meantime, she and Evan have plenty to keep them busy. Both singers are working on new albums while also promoting their show and getting ready to tour together. Speaking to E!, Evan, who turned 30 over the weekend, added that he's also about to dive into a new project with Lee Daniels. Said the birthday boy: "I'm hoping for an amazing year."

Could Posh be getting her own reality show? Despite a denial from Victoria Beckham's rep, insiders tell British tab The Daily Star the designer is "in talks" with American TV producers about making a behind-the-scenes-focused series about her fashion company. According to the Daily Star, the show would potentially begin filming next month so it could show Victoria unveiling her 2019 collection at London Fashion Week in September. Victoria's husband, David Beckham, and their children, would reportedly make appearances on the show, as well. A spokesperson for the Spice Girls alum, however, told The Sun, "There are no talks. Victoria has no interest in doing a reality show." The designer's decision to skip her former band's 13-date reunion tour next year seems to have added to speculation she could be making more time in her schedule for another project.

Fergie and Josh Duhamel showed off their superhero-worthy coparenting skills on Saturday, Aug. 25, when the former couple reunited to celebrate their son, Axl's fifth birthday. "Happy bday party day to my favorite superhero. #axljack," Fergie wrote on Instagram, sharing a photo that showed Fergie in a Wonder Woman costume and Axl decked out in a cape. Josh shared a handful of happy pics, too, plus a video of the ice cream truck the parents had stop by the superhero-themed bash. In other posts (via the Daily Mail), a grown-up Spiderman duked it out with Fergie's Wonder Woman, while Batman threw up his arms behind them. Fergie and Josh ended their eight-year marriage in 2017.

Jada Pinkett-Smith shocked by how many marriages she's seeing end

Is there something in the water these days? Jada Pinkett-Smith posted on Instagram over the weekend that she's "been watching a lot [of] marriages dissolve around me" lately for some reason. "It's been really painful," Jada said in the post. "Marriages change," she continued. "Sometimes they need to be reimagined and transformed. Sometimes they are simply over… but either way, I pray that folks going thru this painful transition find the patience and the love within to not throw the 'babies' out with the bath water." Jada and Will Smith married more than 20 years ago and while they have openly discussed being flexible with the state of their relationship, in both good times and difficult ones, Jada said in June that the two would never divorce. "Take out all that whole marriage/relationship crap, at the end of the day, Will and I are family," she said at the time (via Page Six). "I am going to hold him down, doesn't matter … At the end of the day, that is a man that can rely on me for the rest of his life, period."

Missy Elliott honors Aaliyah on the anniversary of her death

Fans, friends and loved ones of Aaliyah, memorialized the late, award-winning singer over the weekend, marking the seventeenth anniversary of the plane crash that killed her and her entourage in 2001. "Aaliyah, we miss you so much. But your legacy will live on forever and ever!" Missy Elliott could be seen writing in a letter posted via video on Instagram on Saturday, Aug. 25. "Aaliyah (Babygirl) I can only imagine how great you would be today winning oscars😉& creating music that would be in the year 2050 & setting all kind fashion trends all the things you did while you were here with us🙌🏾 but most of all spreading love is what u always were about❤️your fans have worked diligently in holding u down!" Missy captioned the clip. "Your mom & brother @radmax6 are keeping your Legacy alive! We miss you & to those that knew you or your music know that you will always be A One in A Million🙌🏾 Rest peacefully angel Babygirl🙏🏾 @timbaland @Ginuwine Magoo playa tweet Nicole #Supafriends." After seeing the post, Queen Latifah chimed in as well, replying, "miss you already know," along with a string of hearts. Aaliyah was just 22 when she was killed.

Two weeks after "Southern Charm" star Ashley Jacobs announced she and Thomas Ravenel were calling it quits, Thomas posted a series of tweets suggesting she may have been unfaithful while they were dating. "Today, my personal life just took a huge upward turn," Thomas tweeted on Saturday, Aug. 25 (via Us Weekly). "I finally have more than enough information to move forward without any doubt or hesitation and I'll never look back." As fans chatted with him, he cheerfully assured them that's he's not only single, but also "ready to mingle." Asked to share what he'd learned that caused the big change in his personal life, Thomas replied: "After 30 years I finally understand the lyrics from that wonderful Chicago tune: If she would have been faithful / if she could have been true / then I would have been cheated / I would have never known real love." He went on to say that while he wants Ashley to be happy and his working through his own feelings about the split, he looks forward to what's next. "I hope the best for her … I do feel a bit sad now. But now I know that just around the corner, down the street, around the block, something magical is going to happen … perhaps real love," he wrote in a post. In another, he said he's looking for "a woman with whom the trust, faith, respect and love is immovable." Earlier this year, Thomas announced he was not returning for the show's sixth season. The announcement came on the heels of allegations from multiple women that he sexually assaulted them. He has denied the allegations.

Did Danny Boyle quit 'James Bond' because he 'refused' to kill off its star?

In the wake of Danny Boyle's sudden, "creative differences"-sparked departure from "James Bond 25," reports initially suggested he'd clashed with producers and the franchise's current star, Daniel Craig. Now, The Sun is reporting the disagreements were over killing off special agent 007, which Danny reportedly "refused" to allow. According to The Sun, both Daniel and producer Barbara Broccoli demanded a "spectacular finale" in which James Bond would die — a plan Danny allegedly deemed to be so "ridiculous" that he quit. The Sun's source claims such a finale would allow "a twist" in the next film, revealing that "either Bond hadn't died or there could be a 'Doctor Who'-esque regeneration with a new actor." The Sun's report also cites budget problems that are rumored to have caused multiple production staff members to quit. "There are fears the film will be put back months and backroom staff are worried about where their next pay check is coming from," says the source. The film is said to be Daniel Craig's last for the franchise. Last week, Idris Elba denied rumors he's slated to take over the starring role.

The world could soon be treated to a new GOOP post or supplement aimed at healing through "energy balancing" and sound wave and color therapy. That's according to Page Six, which spotted bride-to-be Gwyneth Paltrow and her fiancé, Brad Falchuk at the New York Center for Innovative Medicine in New York last week. Dr. Thomas Szulc, who founded the holistic center for health and wellness, has appeared on Gwyneth's website in the past, sharing information about his unconventional approach to treating Lyme disease. "Gwyneth maintains many relationships with wellness providers as well as medical doctors for her research," a spokesperson told the tab. Gwyneth and Brad are expected to tie the knot in Amagansett, New York, after Labor Day weekend. 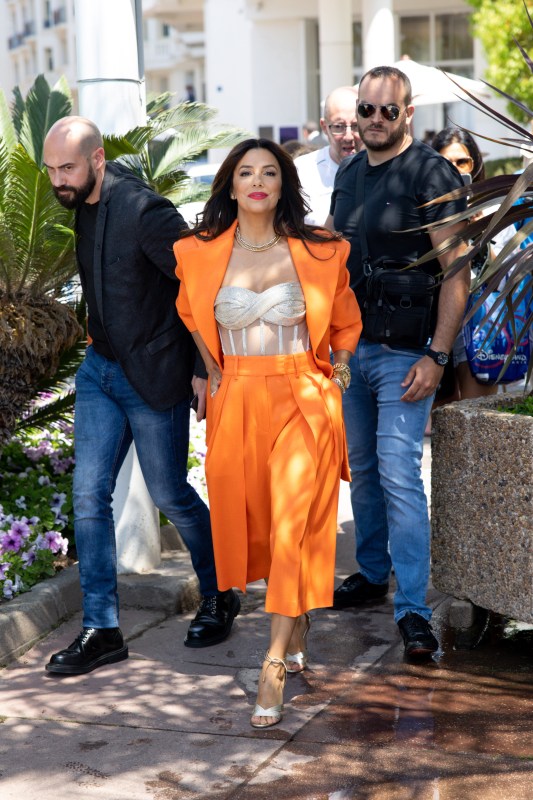