Safe to say no Instagram filters were harmed in the making of this gloriously real selfie. Before heading to the set of "The Voice" this week, Kelly Clarkson put her own, hilarious twist on the concept of the makeup-free selfie (which in the hands of some celebs reads a bit like, "look how amazing I look with nary a smudge of concealer on my preternaturally perfect skin"). Sharing a shot of herself backstage, a makeup wipe draped across her eyes and zit cream dabbed on a blemish, Kelly threw two thumbs up and wrote, "Just another day in #thechair ! #iwokeuplikethis." The glowingly grateful reactions were understandable, particularly given that most of us do not, in fact, wake up "Flawless," per Kell's "I woke up like this" Beyonce reference. "We [don't] deserve the realest queen ever," gushed one fan. Others chimed in with giggling Emojis and plenty of love. "Please don't ever change," begged another commenter, adding, " You are my favorite. Omg. YOU are who I want my daughter to aspire to be like." Bow down!

RELATED: Life after 'The Voice:' Where are the winners now?

And you thought making "A Star Is Born" four times was overkill. Over the course of the press tour for her feature film debut, Lady Gaga has developed a little quirk in which she repeats one very specific sentence about her director and costar, Bradley Cooper. Like the movie's premise, it's a wee bit heavy-handed — and the Internet is having a field day with it. The line goes like this: "There can be 99 people in a room who don't believe in you, and one who does" and as a recent post on TMZ shows, Lady G. has probably uttered the thing more than 100 times. While the video montages of Gaga saying the same thing over and over in different settings are entertaining, the memes and tweet-quips about the whole thing are even better. "I wish I had a $ for everytime Lady Gaga says that 'if there's a 100 people in the room and 99 don't believe in you and just one does, it can change your whole life speech' I'd be a millionaire," wrote one Twitter user (via the Daily Mail). Another gem: "Cute group Halloween costume idea: 99 people … Bradley Cooper … Lady Gaga." There's also the photo of a guy standing in a drained pool alongside the caption, "The one person in a room of 99 people that believes in Lady Gaga." Moving on (before we start tossing out our own "99 problems but a Bradley Cooper ain't one" options) …

Kylie Jenner and Travis Scott buy their first home together

New parents Kylie Jenner and Travis Scott are getting serious about their domestic instincts. TMZ reports the couple recently bought their first home together — and it looks like their daughter, Stormi's getting an upgrade on her already fabulous nursery situation. Kylie and Travis are reportedly the proud, new co-owners of a $13.5 million mansion in Los Angeles' Beverly Hills Post Office neighborhood. The new digs feature a 2,300 square foot master bedroom plus perks including multi-car garage for all the couples' high-end wheels, a gym where we presume Kylie will be snapping selfies of her post-baby workouts and a separate massage room. The purchase marks Kylie's fifth property buy: she currently owns her own, $12 million place in Hidden Hills.

Emma Stone's corset for 'The Favourite' 'shifted' her organs

Here's a Halloween-worthy factoid for those of you in need of a good scare: Emma Stone wore a corset for her role in the 18th-Century period drama, "The Favourite," and the thing physically moved her internal organs around in her body. Speaking to Graham Norton for an upcoming episode of his show, the actress revealed just how damaging to women's bodies clothing used to be. "Women existed like that for such a long time, which gives you a lot of sympathy for that time period and what they were going through," the actress marveled (via Page Six). "For the first month, I couldn't breathe and I would smell menthol and it would make me think I was in a wide-open space and could breathe for a moment in time." Then she shared the freaky kicker. "After a month, all my organs shifted — it was gross and if you don't have to, don't do it!" Dakota Fanning endured something similar for her costume for "The Alienist." "Seven months; your body completely changes," the star told W. "You can get [the corset] on without even lacing or unlacing. By the end I was just snapping it on, snapping it off. It was like second nature." No, thank you!

That Chanel shopping spree Ariana Grande went on shortly after splitting from her fiance, Pete Davidson, probably eased the singer's breakup pain, but as she told a fan on Twitter this week, there's only one cure-all in her world and that's music. Ariana Twitter-chatted with multiple fans on Wednesday, Oct.25, assuring them she'd soon announce new U.S. tour dates where she's expected to debut some of the new music she's been working on. When one fan gushed, "I'm so in love with your passion for music!" Ariana replied by writing, "It fixes everythin," (via People). She also implied that her love for Piggy Smallz, the pet pig she and Pete adopted prior to their split, has been helping her get through the challenges she's endured this year. When a third fan applauded her work ethic, Ariana replied: "it ain't work when u love it r u kiddin ! i'm the luckiest girl in the world to be able to do this s— n express myself n heal this way …. my lifeline tbh thank U for listening n allowing this to be my life."

Drake celebrates his birthday with an ode to the 2000s

Champagne Papi was definitely poppin' the bubbles for his 32nd birthday on Wednesday, Oct. 24 and the vintage was decidedly '00-style. The night before his big day, Drake threw a 2000s-themedf party in Hollywood, where he celebrated with pals including French Montana, Swizz Beatz and more stars. On Instagram during and after the bash, Drizzy showed off his multiple costume changes — an ode to Fabolous' "Trade It All" music video outfit earned some b-day love from Fabolous himself — and decorations ranging from childhood photos of Drake to a Slurpee-stuffed 7-Eleven section. Not a bad compliment to a week that XXL magazine reports began with the rapper breaking The Beatles' record for the most Top 10 hits in one calendar year on the Billboard Hot 100.

After Kim Kardashian West and Kanye West's daughter, Chicago, was born in January, TMZ reported the couple had declined multiple, multi-million dollard offers for the first photo of the little girl. Now, Cardi B and Offset are following suit when it comes to shopping pics of their newborn daughter, Kulture. Cardi stopped by for a chat with Apple Music's Ebro Darden this week and explained why accepting an impressive offer she got to share a photo of the little girl isn't in the cards for the new parents at the moment. "Me and my husband … We just don't wanna show our baby right now," she said, according to People. "I got offered seven figures [for baby pictures], but I'm just not ready yet." Seems about right for a mom whose first album was titled, "Invasion of Privacy."

As NBC distances itself from Megyn Kelly, who still has a year-and-a-half with the network according to her contract, the "Today" show personality's blackface comments seem to be straining other key professional relationships, as well. Megyn has reportedly split from CAA, which had represented her since 2015, according to Page Six. While insiders at NBC tell the tab Megyn was already in talks with UTA because of "conflicts" with CAA and "NBC management," it seems she's now lost her negotiating foothold with UTA and is being repped by entertainment lawyer Bryan Freedman instead. After the controversy aired, Megyn apologized for her comments and said had not understood the malignant, racism-fueled Jim Crow history of blackface in America. There's also reportedly talk at NBC of nixing her eponymous "Today" segment at the end of the year.

Ellen DeGeneres rarely misses a chance to support a good cause — whether it's introducing a young tennis star to her favorite celebrity crush or donating cold, hard cash to someone in need. She went for the latter option on Wednesday, Oct. 24, thanks to a surprise "Ellen" visit from Ricky Martin. The Puerto Rico native (and newly minted Emmy nominee) used his appearance to announce plans to award houses to displaced residents of the hurricane ravaged U.S. territory where he was born as part of his ongoing efforts to help the island recover from 2017's deadly hurricane Maria. In response to his announcement, Ellen promptly donated $20,000 to the cause. "For an entire year many, many Puerto Rico residents had no power, no electricity," Ricky said (via the Daily Mail). In addition to his housing push, Ricky said he'd organized a fundraiser allowing his 10-year-old sons to help the cause. Their drawings of Puerto Rican flags now appear on T-shirts being sold via Charity Stars, the proceeds of which are supporting more relief efforts. "We live off of tourism, if you want to help us, come and visit the island!" he encouraged viewers. "We have the most amazing beaches, great restaurants, great hotels — but still we need help." More stars who've worked to support aid efforts as Puerto Rico continues its recovery this year include Jennifer Lopez and Alex Rodriguez, among others.

How seasonal! Dakota Johnson hit the red carpet for her "Suspiria" remake with a special horror genre alum at her side — her grandmother, Tippi Hedren, who won a Golden Globe for her performance in Alfred Hitchcock's classic, "The Birds." The 29 and 88-year-old duo huged and smiled for cameras as they headed inside the ArcLight Cinerama Dome in Los Angeles on Wednesday, Oct. 24. Dakota's mom, of course, is Melanie Griffith — Tippi's daughter — while the "Suspiria" star's dad is Don Johnson. 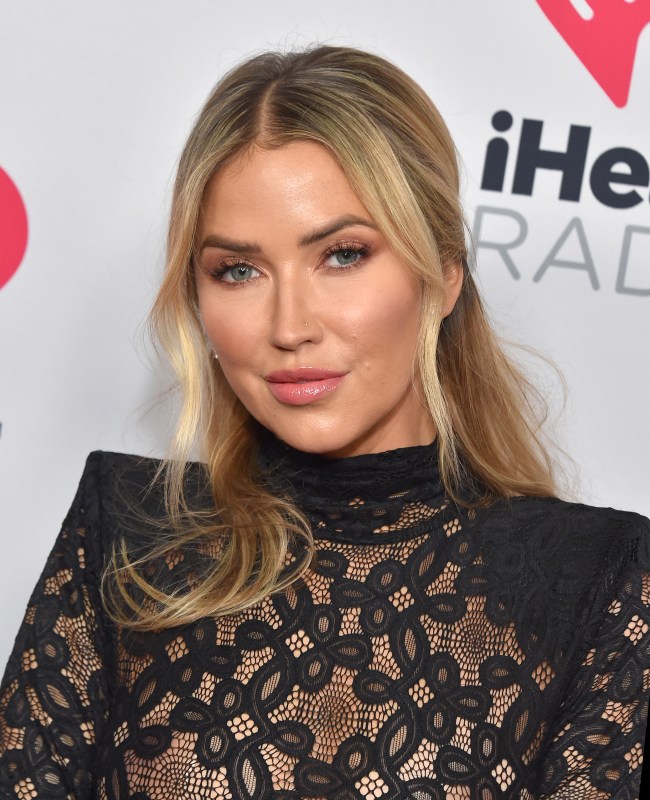