It was only a matter of time until Prince William turned into a robot for his wife. #Marriage.

RELATED: The Duchess of Cambridge's best looks of 2016

Celine Dion perfectly depicts how we felt after the election.

Alec Baldwin, tell us how your steak was prepared tonight…

And this whole time you thought Jennifer Lopez was one of a kind!

Chrissy Teigen is the walking definition of "food for thought" right now.

Rihanna is brave! Most people couldn't stand to watch the Lakers last season with two eyes, but Rihanna, on the other hand…

Julianne Hough just realized she hit "reply all" on that insulting email.

Don't ever let Kaley Cuoco and Johnny Galecki around laughing gas ever again.

Pumpkin's not the only one who's ever wanted to strangle Honey Boo Boo.

That look you give when you find out your ex and your friend are now dating. Nicole Kidman gets it.

Leonardo DiCaprio just can't understand how some of these guys get roses on "The Bachelorette." We know how you feel, Leo.

While listening to R. Kelly, Jennifer Garner did, in fact, believe she could fly.

Kelly Ripa can catch a baseball, but she can't catch a co-host. What do ya know!

Gwen Stefani is stocking up for her relationship diet. We all know the one.

You've heard of kiss and tell? Well, Heidi Klum and Vito Schnabel have perfected the tactic.

What has two thumbs and wears too much jewelry for a country artist? This guy, Jason Aldean.

Is it just us or does Victoria Beckham look different these days?

Snooki, we caught ya red handed! (We know, we know, that one was too easy.)

Susan Sarandon's life would be a lot better if she would just swat the fly.

Kendra Wilkinson's "blue steel" look is too bootylicious — and you ain't ready for this jelly.

…and now you are seeing the fruits of Vanessa Hudgens' labor.

With hands like that, that it's hard to tell where Arnold Schwarzenegger's fingers end and the sausages begin.

…that moment when Vin Diesel's narcolepsy catches up to him.

Salma Hayek don't want none unless you got buns, hun!

Uh, Suzanne Somers, what time was it again that you said you'd be over to clean the house?

That look you get from Ryan Gosling when you bet the Carolina Panthers in the Super Bowl, but he told you not to.

I guess this looks like as good of a hand rest as anything, said Lady Gaga.

If we didn't know better, we'd think that Kendall Jenner stole that hat from the Hot Dog on a Stick employees.

This is what Kaley Cuoco and Jimmy Kimmel call "rolling with the homies."

Liv Tyler has developed a slight hunchback… it's hardly noticeable.

Why do people insist on calling Simon Cowell a puppet?

Dakota Fanning's hair could probably use a little caffeine this morning.

If the "see no evil" emoji was next to Bradley Cooper and Irina Shayk, this would be perfect.

Thanks to Mariah Carey, we can pinpoint the exact moment when nightclub dress codes jumped the shark.

For Gabreille Union, this is the red carpet equivalent of marking your territory.

Kelly Ripa should lend this to whomever her new co-host turns out to be — they'll be banging their head against the wall before you know it.

The great thing about Paris Hilton's dress: It doubles as a festive tablecloth.

That boy who took Ray Liotta's daughter out for a date had better drop her off on time.

Scarlett Johansson will do anything for a little peace and quiet.

Isn't it always so annoying when you just can't get that popcorn kernel out of your teeth, Zendaya?

Joshua Jackson is looking for a ring… since he never gave Diane Kruger one.

Jamie Foxx shows off his strike-out dance — like a touchdown dance, but worse.

If Hilary Duff's ex-husband was as good a listener as this guy, maybe they'd still be together.

Luke Bryan shows us how we all felt after National Doughnut Day.

Solange Knowles once fanned the flames surrounding those Jay Z and Beyonce divorce rumors. Now she just dresses like a fan.

Britney Spears. Caffeine. Yeah, it definitely looks like they're friends.

You would think Melissa McCarthy would have swallowed her dinner by now.

Think Prince William knew Duchess Kate was so hard-headed before he married her?

The last time Kaley Cuoco hugged a dog, it was her ex-husband.

When it comes to looking for a good man, Paris Hilton's track record isn't the best — but that all changes today!

Jon Hamm may need to talk to his dentist about using less Novocaine.

Cara Delevingne is always game for a little hypnosis.

Listen to Eva Longoria — she has a point here.

Hey Chris Pratt, we mustache you what time it is.

If Kate Beckinsale starts singing "Supercalifragilisticexpialidocious," we give up.

Unfortunately for Christine Taylor, Ben Stiller, Hugh Jackman and Deborra-lee Furness, no one else got the wear-all-black memo at the U.S. Open.

Well, this is rather convenient… You know, since most of Rosario Dawson's movies these days take a bath too.

Rachel McAdams is giving the sign to steal second base. The Dodgers could have used her in the playoffs.

Beyonce always seems to have a leg up on everyone else in music, doesn't she!

When a hairdresser in training tried to tell Emma Roberts she needed bangs.

We agree, Tom Hanks, it IS 5 o'clock somewhere.

Will Smith, the Babe Ruth of Hollywood.

Hopefully, Scarlett Johansson knows where her hands have been.

Tom Brady doesn't know how to act around a properly inflated piece of sporting equipment.

Gigi Hadid's head is really getting big these days.

Spencer Pratt and Heidi Montag are still eating up their 15 minutes of fame.

If this acting thing doesn't work out for Hugh Jackman, he can always sub as an eye model for WWE's The Undertaker.

Sarah Hyland just found out how much her American Express bill is. Yep, been there.

That judging look you give when you see your ex's new partner out and about (read: Any woman who dates Lamar Odom, French Montana or James Harden… beware.)

Gabrielle Union's face when her friend wants to go to that restaurant that serves mediocre food.

Someone tell Coco that raising the roof isn't a cool move anymore.

Caution, model crossing. Do not disturb.

Nick Cannon was never made to be a leader.

Clive Owen wears the most sophisticated bike helmet in the world.

Gerard Butler might be looking for a hit movie… it's been a while.

Mel Gibson could be praying that he won't open his mouth… which isn't such a bad thing.

Joe Jonas must be thinking, "I doughnut know who to text right now."

Welcome to Sarah Hyland's quest to find a signal.

Amy Schumer is so happy that even her eyes are smiling.

It was at this moment that Duchess Kate decided that she would never ever buy that budget hair spray again. 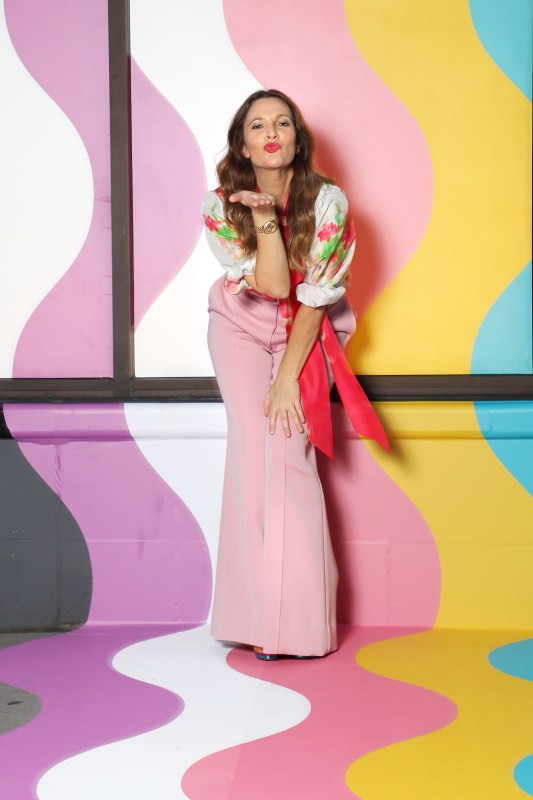 Up Next Flower Power