Wonderwall.com is taking a look back at the celebrities who found love, suffered heartbreak or experienced some other major event in their love lives in July 2019, starting with our favorite young pop stars… Shawn Mendes and Camila Cabello spent most of early July confirming rumors from late June that they're an item as they were spotted on several PDA-packed outings together. Now keep reading for more of the month's biggest celeb love life updates…

TMZ revealed on July 11 that Heidi Klum and Tom Kaulitz secretly tied the knot on Feb. 22, the first anniversary of the day they met.

Sarah Hyland and Wells Adams took to Instagram on July 17 to announce that they're engaged after less than two years of coupledom.

Britney Spears and her boyfriend of nearly three years, Sam Asghari, made their red carpet debut at the premiere of "Once Upon a Time in Hollywood" at the TCL Chinese Theatre in Hollywood on July 22. The singer sported a diamond ring during the A-list affair, sparking rumors that they'd gotten engaged — though multiple media outlets reported on July 23 that Sam has yet to pop the question. (Vanessa Hudgens and her longtime boyfriend, Austin Butler, also sparked engagement rumors at the event.)

Princess Stephanie of Monaco's eldest son, Louis Ducruet, married his college sweetheart, Marie Chevalier, in a civil ceremony at Prince's Palace in Monaco on July 26. The following day, they had second wedding: a religious ceremony at the Cathedral of Our Lady Immaculate, which is where his grandparents, Grace Kelly and Prince Rainier II, wed in 1956.

During an interview with iHeartMedia that aired on July 12, Ed Sheeran finally confirmed longstanding rumors that he and Cherry Seaborn secretly tied the knot.

Kendall Jenner and Los Angeles Lakers power forward Kyle Kuzma sparked romance rumors when they attended several Fourth of July parties together. But on July 14, the model took to Twitter to deny that they're an item.

Finally official! On the July 17 episode of "The Bellas Podcast," Nikki Bella finally called Artem Chigvintsev her boyfriend. Just a few days earlier, the former "Dancing With the Stars" partners posed together on the orange carpet at the Nickelodeon Kids' Choice Sports Awards — their first official appearance as a couple since taking their relationship to the next level in late 2018.

Nicole Murphy and Antoine Fuqua were photographed packing on the PDA while hanging out at a hotel pool in Italy on July 20. It's unclear when (or if) the "Training Day" director and his wife of two decades, actress Lela Rochon, called it quits. Nicole later claimed to TMZ that she was under the impression Antoine was divorced.

Leona Lewis married her love of nearly a decade, choreographer Dennis Jauch, in a vineyard in Italy's Tuscany region on July 27.

On the July 8 episode of her eponymous talk show, Wendy Williams confirmed she has a new boyfriend — but he's not 27-year-old fashion designer Marc Tomblin, to whom she was linked in June. The hostess said she's "crazy about" her mystery man — a doctor who's been married before and has kids in their 20s — but she's not in love with him.

On July 21, Us Weekly confirmed rumors from May that Rooney Mara and Joaquin Phoenix are secretly engaged.

"The Real Housewives of Atlanta" star Cynthia Bailey and her boyfriend of a little more than a year, sports journalist Mike Hill, got engaged at the grand opening of her new Atlanta-based business, The Bailey Wine Cellar, on July 26.

Tom Holland has a new girlfriend: The English actor was spotted holding hands with Olivia Bolton at the British Summer Time Hyde Park music festival in London on July 14, signaling that his rumored relationship of around two years with Zendaya had come to an end.

Cole Sprouse and Lili Reinhart have called it quits after nearly two years of coupledom, Us Weekly reported on July 22. Other outlets also reported the"Riverdale" co-stars had broken up, but the duo made fans question their relationship status when they separately took to Instagram to promote their new joint cover of W magazine, hinting that maybe the reports were false. "BREAKING: A reliable source has confirmed that none of you know [anything]," Lili wrote.

KJ Apa, 22, and Britt Robertson, 29, are an item, multiple media outlets reported on July 21 after the "A Dog's Purpose" co-stars were seen packing on the PDA during a Comic-Con party.

In The Band Perry's new song "The Good Life," which dropped on July 12, frontwoman Kimberly Perry sings about the infidelity she experienced during "a toxic and incredibly difficult time" in her life. Though she stopped short of explicitly saying that her ex-husband, J.P. Arencibia, served as the inspiration for the song, the blonde beauty made it clear during an interview with People magazine that, based on the timeline, she's talking about the former MLB catcher. He clearly got that impression! J.P. took to social media — and released a statement to People — denying that he'd ever been unfaithful. He went on to call the whole thing a publicity stunt on his ex-wife's part.

On July 16, MailOnline revealed that Michael Sheen has a new girlfriend: 25-year-old Swedish actress Anna Lundberg, whom he's been seeing since at least May. The following day, the Welsh actor tweeted that he and Anna are expecting a child together.

People magazine reported on July 3 that according to La La Anthony's rep, the actress is "proceeding with legal discussions as the next step" in her relationship with her husband, Carmelo Anthony, in the wake of his latest cheating scandal.

Dua Lipa and Anwar Hadid confirmed they're a couple by kissing and cuddling during the British Summer Time Hyde Park music festival in London on July 6. A few days earlier, a British tabloid reported that the "One Kiss" singer was seen smooching Chris Martin at another English music festival. The Coldplay frontman's rep released a statement denying the report.

Bindi Irwin took to Instagram on July 24 — her 21st birthday — to reveal that her longtime boyfriend, Chandler Powell, popped the question.

Olivia Culpo and Christian McCaffrey, who reportedly hit it off in June, debuted their burgeoning romance during a post-Independence Day vacay in Cabo with the two friends who "set them up."

Cara Delevingne and Ashley Benson sparked engagement rumors by wearing matching gold bands while vacationing in St. Tropez on July 5. Two weeks later, the former "Pretty Little Liars" star debuted what appears to be a tattoo dedicated to her girlfriend of a little more than a year: the letters C and D (Cara's initials) just below her armpit.

Elijah Wood and his girlfriend of at least a year, Mette-Marie Kongsved, also sparked engagement rumors when they stepped out in Los Angeles on July 8. The Danish film producer, who's apparently pregnant, can be seen wearing what appears to be an engagement ring.

During an interview with Vogue that hit the Internet on July 9, Ariana Grande described her relationship with her ex-fiancé, Pete Davidson, as "an amazing distraction" from a difficult time in her life — specifically her breakup from the late Mac Miller, who died of an accidental overdose in September 2018. "It was frivolous and fun and insane and highly unrealistic, and I loved him, and I didn't know him," she said of the "Saturday Night Live" star.

Amy Landecker and Bradley Whitford tied the knot in Santa Barbara on July 17.

During an interview with "Entertainment Tonight" that hit the Internet on July 15, model Calee Lutes confirmed previous rumors that Peter Weber, who's currently competing for Hannah Brown's heart on "The Bachelorette," suddenly ended their long-distance relationship of five months in December so that he could appear on the show. She also said that since the season debuted, "multiple people" have reached out to tell her that the pilot was seeing other women while they were exclusive.

E! News reported on July 9 that Cole Swindell and Barbie Blank, who debuted their relationship at the 2019 ACM Awards in April, have already called it quits.

Bella Thorne and her boyfriend, Italian pop singer Benjamin Mascolo of Benji & Fede, posed together in their first joint photo shoot: a feature for Vanity Fair Italia that hit the Internet on July 16. In the accompanying interview, the duo revealed that they first connected through Instagram three years ago but didn't meet in person until Coachella in April 2019. (Bella's relationship with her ex-boyfriend, rapper Mod Sun, came to an end after they got into a fight at the Southern California music festival.)

Andrew Garfield is dating model Christine Gabel, Radar Online reported after the duo were seen walking with their arms wrapped around each other in Los Angeles on July 10.

Adriana Lima debuted her new boyfriend, Emir Uyar, in Mykonos, Greece, on July 8. It's unclear when exactly the supermodel and the Turkish businessman, who were also seen holding hands, first started dating.

Although he's still in the process of divorcing second wife Elvira "Elly" Schneider — a process that's taken five years so far — John Schneider married Alicia Allain in a non-legally-binding ceremony in the barn at John Schneider Studios in Holden, Louisiana, on July 2. The pair plan to make their union legal once the former star of "The Dukes of Hazzard" finalizes his divorce.

"Riverdale" star Vanessa Morgan took to Instagram on July 3 to announce that she and baseball player boyfriend Michael Kopech, who previously romanced Brielle Biermann, are engaged.

Shannon Beador took to Instagram on July 26 to debut her new boyfriend: insurance brokerage firm exec John Janssen, whom she reportedly met through mutual friends and started seeing a couple months ago.

In early July, Keshia Knight Pulliam sparked rumors that she and "For Better or Worse" alum Brad James are an item. They've been flirting on social media for months.

On July 16, Us Weekly reported that, according to a source, Bachelor Nation's Dean Unglert and Caelynn Miller-Keyes are "together" but "taking it slow" following their time together on Season 6 of "Bachelor in Paradise," which debuts in August.

DailyMailTV revealed on July 11 that Phaedra Parks is dating "The Haves and the Have Nots" actor Medina Islam, who romanced Claudia Jordan back in 2016. The former "The Real Housewives of Atlanta" star met her new beau on Raya, an exclusive dating app for the rich and famous.

Lily Collins sparked rumors that she's dating Emilia Clarke's ex-boyfriend, director Charlie McDowell: The duo were spotted packing on the PDA during an outing in Los Angeles on July 14.

Aubrey O'Day opened up about former loves Pauly D and Donald Trump Jr. while promoting the third season of the MTV dating show "Ex on the Beach" on Instagram on July 16. "After my last relationship with Pauly, it took so long for me to heal from the pain, anger, torture, & toxicity that I found love in with him," she captioned a photo of herself. "I'm so happy for you guys to watch the journey of an 'older gal' find her younger self and maybe [a new man] too." She then added, "Oh and yes, Don was my soulmate, and I was his. I said it, I mean it. He knows it still." The singer allegedly had an affair with the president's son in 2011, while he was still married to Vanessa Trump, whom he's since divorced. 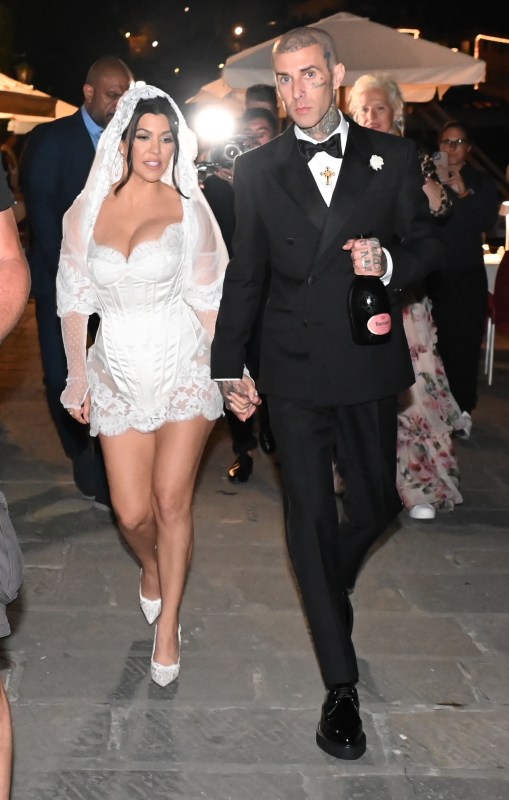